This week, as part of the iHomeschoolNetwork’s 10 * in * 10 series, I’m joining a group of awesome homeschoolers to talk about the reasons our kids love being homeschooled.

I asked Ashar for her list, and I tried as hard as I’ve ever tried not to “lead” her, especially when I realized she didn’t want to take it in the same direction I would have tried to. Her comments are in bold, and my own thoughts follow each item. 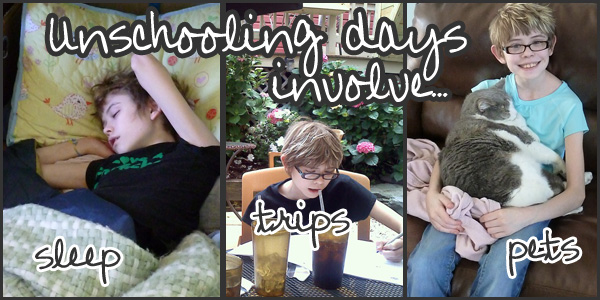 To Ashar, this was all one item – and basically it sums up the thing I still haven’t written about yet, Part 3 of our educational journey, the decision to take Ashar out of public school. All of these things put together make up a skill called “executive functioning,” and it’s a struggle for many kids, but especially those with Asperger’s. Moving from class to class, understanding that different teachers work in different ways, dealing with 30 people in one room and a different 30 in the next room, takes a kind of planning and mental energy that is, for lack of a better word, draining to Sarah. But at the same time, when Ashar is engaged and wants to learn about something, she absolutely hates being told, “No, don’t go read that yet. First we’re going to talk about XYZ, then we’re going to talk about HOW we’re going to do the reading, then we’re going to talk about what we’re going to write after the reading…” That drives her nuts. So not having to wait for permission to engage in learning…. that’s key.

3. Being able to go on family trips like to Harpers Ferry.

We just took that trip Tuesday, and the day before, we’d been in Philadelphia. But we just as often take family “trips” to the local antique store or used book store or park. The bottom line, though, is that we can go places together. (And Ashar really enjoyed the historic sites we visited this week, so much so that they’ll be topics for the next couple of days’ posts!)

4. Being able to tell my friends about it.

So this is a twofold thing. First, Ashar is kind of a homeschooling evangelist now. She thinks it will solve all her friends’ problems; she even tells them, “You should sit down with your mom and your dad and talk about if homeschooling would be good for you.” (Sorry, Ashar’s friends’ parents. I never set out to start, you know, a movement, but crap happens.) The other part of this one is that Ashar is a conversation-planner. No one has taught her this skill – but it is a great mechanism for kids with any kind of social or communication challenge! Most of us do this – but we’re not conscious of it. Ashar is. Basically, before she interacts with people, she makes a list in her head of things they might talk about. In a great example, she once changed clothes before going to a friend’s house up the road to see if he could hang out – so that if they didn’t have something to talk about, she could mention her new hoodie and the trip to the art museum, where we got it. This was actually hard for her when she went to the same school as all her friends, because she couldn’t very well say, “Guess what I did at lunch today?” – since they were there too! So, homeschooling win.

Not a shocker. I was actually surprised this didn’t rank higher. She spent most of today immersed in a project to build “custom bedrooms” for a bunch of Beanie Baby bears, based on their “theme.”

I typed this with a period at the end, and Ashar goes, “No, that’s an EXCLAMATION MARK.” I laughed when she finally said this, because I expected it to be the first item. Her sleep schedule in homeschooling is entirely different – going to bed at midnight, getting up at 10 a.m. Before, she went to bed around 9 p.m. and got up around 6 a.m. – ugh for our whole family, which veers more toward night-owlishness. The new system is a little unusual, but better.

7. I have my whole backyard and lots of books to read that give me ideas that I can do right in my own house, not from books I can’t take home.

I had to kind of work through what this one meant too. Basically, it boiled down to a few factors: First, she likes being able to learn from the books she chooses (unschooling, yeah!) and in her own space. But second, she likes learning at her own time. The books-you-can’t-take-home thing was that Ashar was once doing an experiment in some science class out of the teacher’s manual, and she liked it, but she wanted to do it again with some different material we had around the house. I don’t know what experiment this might have been, but basically, she wanted to be able to take the book with the instructions with her. No dice, and of course as soon as she found that out, she lost interest in the classroom version of the experiment. We highly believe in seize-the-moment learning, and this is why.

8. I like not being graded. I don’t like having to be graded because it seemed like if you were doing bad or you needed to get your grade up, it felt like it was giving me a panic, like, “I’m going to fail this class,” almost.

Ah, yeah, Ashar the worrier. Being compared with anyone is almost always a bad thing for her – even if it’s a favorable comparison. And being put in remedial classes and taking adapted tests, while good for both Ashar’s grades and her teachers’ ability to see what did and didn’t work for her, did a number on Ashar’s self-confidence, because she was old enough to realize that was “different” but not quite mature enough to realize that it didn’t mean she was “dumb,” sadly. Now, no grades means many fewer stresses, and she is ironically more willing than before to “show what she knows,” to borrow a phrase from her former school principal, who I really like.

I assumed Ashar just meant “after school” – no homework – but she meant during the day and to interact with friends. “Some days, we just had five minutes at our lockers and that’s all we’d see each other,” she said. “And if somebody on another team had homework, even if I didn’t, then we couldn’t hang out.” Now, she sees her friends slightly less frequently, but her impression is that she sees more OF them – in many-hour increments, often! And she gets more time to play video games – which she likes.

10. Being able to hang out with family.

Ashar liked that she didn’t “miss anything” earlier this week while we had family visiting from out of state. She was here all day, not, as she put it, “having to come home from school and then hurry up and talk to them.”

Today’s post is also part of Top Ten {Tuesday} at Many Little Blessings. Whether you’re sharing your Top 10 reasons why you or your kids love homeschooling, or a Top Ten list on any other topic, I’d love for you to link up and to check out the other blogs that have, too!  And don’t forget to check out last week’s post, if you missed it, on our 10 unschooling and homeschooling must-haves.

6 thoughts on “10 reasons our daughter loves unschooling and homeschooling”