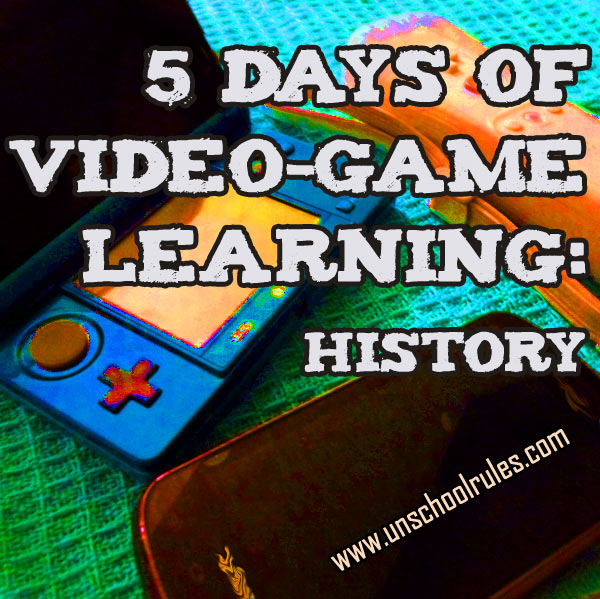 While we don’t have the latest and greatest video-game systems, technology and especially gaming are a huge part of our lives. Is it any surprise that they’re a major part of our teenage son’s homeschooling experience as well?

Today, we’re talking about the ways modern technology is helping us learn about the past.

Video games for history and geography

Disclosure: This post has some affiliate links. I only link to things we legitimately use and recommend, so if you see such a link, it's because we really do believe in the book or item!
Let me just start out by saying I’m not a history buff. At. All. Ashar actually really enjoys history – everything from Native Americans to the Titanic to Elizabethan England. As we’ve delved into the topics that he’s most interested in, I admit, I was surprised to find him requesting some related video games. These were things he knew about, some from friends, some from public school, that I wasn’t familiar with.

I’m sure there are more modern games that have a historical twist, too. These are the ones I’m most familiar with because they’re our style of game, but I know there’s some good stuff out there in the World War II realm! (And a couple of Ashar’s older friends love Red Dead Redemption; I don’t, particularly, but even that seems to have taught Ashar about the Wild West!)

Wikipedia even has what I think is pretty cool – a list of video games with historical settings. I wouldn’t suggest there’s a year’s worth of curriculum in Grand Theft Auto: San Andreas, which is mentioned there, but some of them sound pretty intriguing!

This post is part of the iHomeschool network’s January 2013 “5 days of…” Hopscotch series.

We’re sharing everything from tips and tricks for getting out of debt to using posterboard in your homeschool, from catapults to eating whole foods.

We sure are an eclectic group – I hope you’ll check out more!

And if you’re into the things we do in our family homeschool, check out my previous “5 days of…” series, 5 days of real-world math.

3 thoughts on “Bringing the past to life: Video games for history and geography”