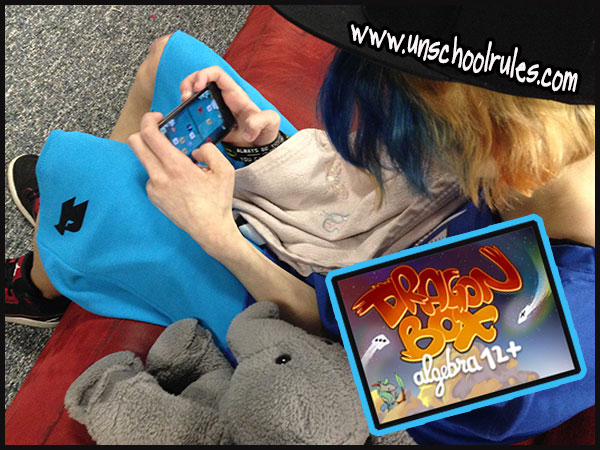 In our house, math had only been interesting, for a long time, to me. During her years in public school, Ashar considered math somewhere between, you know, a root canal and Brussels sprouts on her list of dislikes.

Disclosure: In exchange for the honest review of our experience which appears in this post, our family was offered the DragonBox Algebra 12+ app download for free, but we’d already chosen to purchase the game last year! We were compensated for our time completing the review, but all fun had was ours.

In homeschooling, though, I think I’ve been able to show Ashar something cool about “math” – that it’s not just (or, in my opinion, even mostly) about calculation.

When I can show her how the true concepts behind “school math” appear in ways that intersect with her day-to-day life, well, that’s what I’m going for! And as part of my personal quest to show people that you can unschool math, and that math can be cool, I often check out any “math stuff” that comes down the pike.

As part of that, last year, we starting playing around with an app called DragonBox Algebra. Ashar got into it and used it pretty heavily, and this year, when it happened to come up as an option for us to review, she said, “HEY! We did that! Let’s talk about it!” 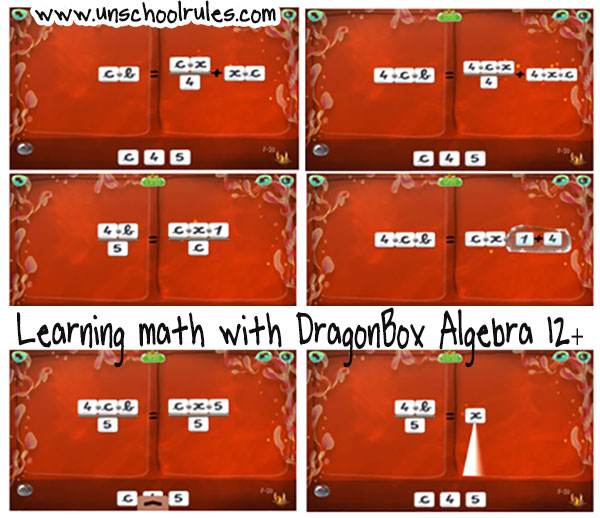 How can dragons and boxes teach the concepts of algebra?

There are 10 chapters in the DragonBox Algebra 12+ app, each with a different dragon you’re to feed and grow throughout that chapter’s 20 to 30 levels, each consisting of a problem solved in stages like the one you see Ashar’s work for above. While later problems in each chapter look like this one, with numbers and letters, earlier problems feature creatures in place of letter variables and dice-style “pips” in place of numbers.

“It’s a mind-thinking game,” Ashar described it. And she’s right. This is what I love about real math: It’s so much more than computation. It’s about logic and understanding how numbers play with each other.

Want to see it in action? Check out developer We Want To Know‘s trailer for the game here.

For us, solving the problems as they come up in DragonBox, and talking about concepts like “balance” in equations and what zero really means, is all we need. That said, if you’re interested in using DragonBox Algebra (or the other DragonBox apps) in a more formal way, the company offers a pretty huge set of teacher resources, including worksheets and more.

“To me, it’s relaxing, because you get to figure out what goes with what and how to do it, and if it doesn’t work, you can always go back and fix it,” Ashar said.

THAT. That is SO MUCH BETTER than worksheets and “wrong answers” and grades, to me. Life and math aren’t about “getting it right the first time.” They’re about figuring out how things work and trying them over and over until you get it just right.

I admit, last year, when I heard about DragonBox through things like this Forbes artice, I was a little skeptical. Oh, I thought it would be a good algebra app, for sure. (After all, among other things, the graphics are phenomenal, which is a big plus for us.)

But I tend to have a real hangup about “educational games.” I’ve said it before and I’ll say it again: Math with pigs and cookies is still math, right? Kids aren’t dumb, and you’re not getting anything past them. In fact, that’s one thing about the DragonBox marketing that surprised me: It’s actually billed as a sneaky way to teach algebra, but I bet most kids can figure that out on their own!

Anyway, I’m glad I let go of that hangup enough to try this app out. Yes, it’s an “educational game,” to be sure. But it is also just plain cool.

But it IS our style to strew a lot of resources for Ashar, and whether she’s playing DragonBox or Plague, Inc. or Dragonville or Marvel Champions or Batman: Arkham Origins, I’m sure she’s engaging her brain and I have a ton of fun when we can check out new apps together. I’m glad DragonBox is part of our suite of fun!

Interested in learning more about “how we learn” and what we do with video games and real-world math? You might want to check out some other Unschool Rules posts on the following topics:

How you can get DragonBox

DragonBox Algebra 12+ is available both for iOS devices and Android.

You should definitely also check out their other products, too. DragonBox Elements is a geometry-based game we also have been playing for months; that’s available for iOS here and for Android here.

And there’s a version of DragonBox Algebra 5+, aimed at slightly younger learners but still fun for older kids, also available on iOS and Android devices.

Finally, DragonBox is giving away a total of 100 people access to the web-based versions of the algebra and geometry apps. (No mobile device is necessary for these!) This is valid for anyone in the world. Enter to win in the widget below!

2 thoughts on “DragonBox: A beautiful and fun way to explore algebra concepts”