A little more than a month ago, I got a text message from Ashar, who was out with her dad, Chris.

“We bought a cemetery,” it said.

Well, it turns out that in good news, we are not the owners of an additional thing that needs its lawn mowed. It turned out that Ashar and Chris had found something cool at the nearby Dover Antique Mall while looking for a birthday gift for Chris’ nephew, Jacob.

Their find? An incredibly detailed miniature cemetery, probably designed to be used with model trains. 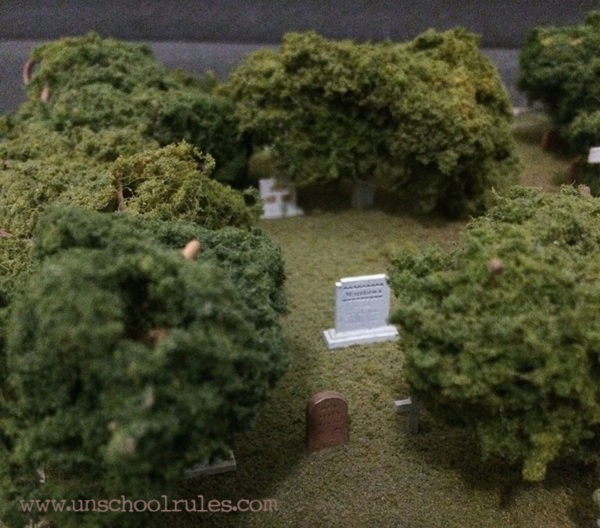 The attention to detail in the tiny gravestones in our cemetery is amazing. It’s hard to read at this size, but each one has a name, like “Matthews,” written on it.

Conveniently, we actually all really like cemeteries and also have been talking for multiple years about setting up our own model train layout, but haven’t ever done anything about, you know, actually doing it.

So when Chris saw the cemetery, he figured, “Hey, why not?” Ashar was thrilled; she said you can tell this cemetery was handmade by someone who put a lot of care into it, and she said now we can take care of it and give it a good home.

Our first project came courtesy of Ashar, who decided we needed a name for our cemetery. She ran an email poll for the five members of our household, with suggestions that included:

Ashar narrowed it down to four finalists:

And, by a unanimous vote, the winner was Maluhia (which Ashar came up with)! Now we’re trying to figure out how to make a sign for it, with VERY TINY LETTERS. 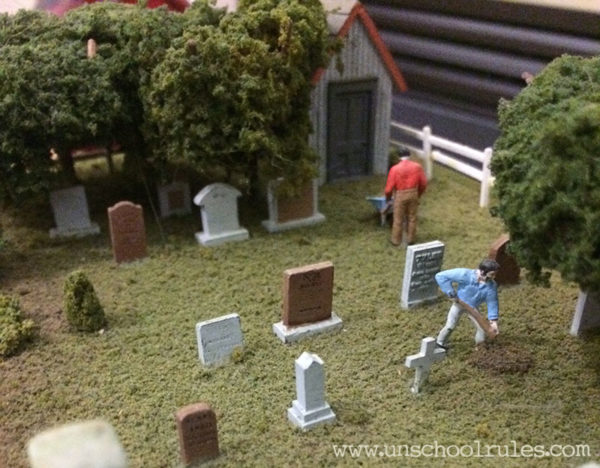 Trying to move the project along, last week, Chris and Ashar spent several hours researching various layout options for model trains. They’d already purchased some other odds and ends… but ran into a bit of a scale problem. 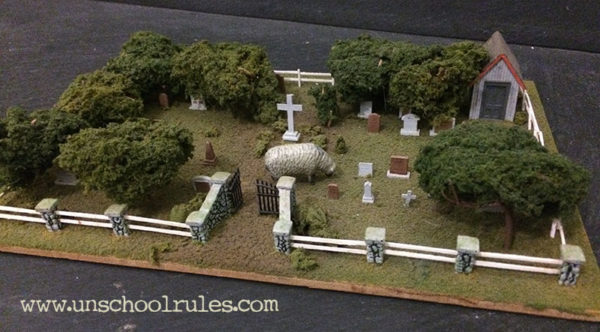 This is what happens when you don’t know what train scale your sheep or your cemetery are. We prefer to think of this sheep as a product of our nearby nuclear power plants.

After a ton of research, we turned up these fun facts:

After a lot of research and discussion, it sounds like we will have a generally HO-scale setup. The train will definitely be that size, and the rest of our things will be… close. My parents and I actually had an HO train platform when I was growing up, and I still have some houses and a railroad station with our Christmas decorations!

Meanwhile, we’ve found a space in our finished basement rec room that will likely be home to our train platform, and Chris and Ashar have chosen a layout – one train in a loop, with scenery inside its and outside its loop, then another train in a loop outside that, with scenery on the outside of it as well. (As some of us like the train part better and some of us are more into the scenery, this should offer a lot for everyone to enjoy!) 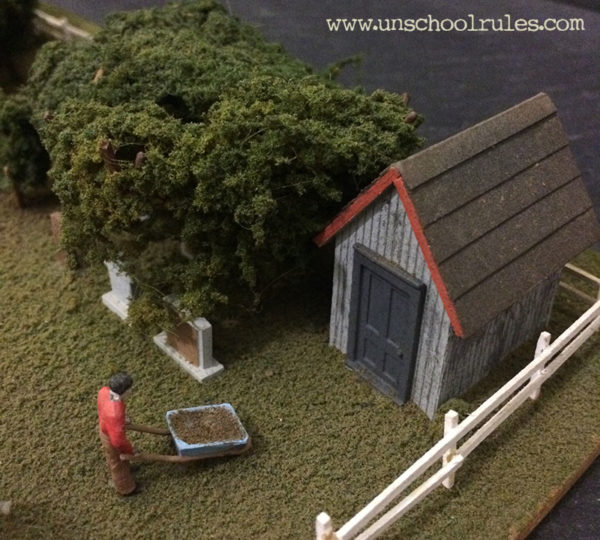 Next up: Finding a train to join the layout with our cemetery.

Ashar and Chris have decided they’re going to use what is called True-Track, which is essentially track that sits on a gravel bed so that you don’t have to lay anything beneath it on your foundation. They’ve been eyeing up trains, as well; Ashar’s preference is the slightly more modern-looking diesel locomotives, like this one, not coal-powered trains. She also wants them to make noise and light up, so we have to figure that out, too.

So what’s next? Chris and Ashar need to measure their space and figure out what they’re going to start building on. And then… we start with a cemetery called Maluhia and build from there!

I’m sure there will be many posts to come in the future, but for today, I wanted a chance to show off our new family cemetery.