We have been amazed by our support system of family and friends on our homeschooling journey.

I mean, really amazed. We get tons of suggestions, lots of understanding, a fair number of questions, but few truly critical remarks, even though our lifestyle is different than, oh, everyone else we know in person.

I know that so many homeschoolers, even ones WAY more traditional than we are, aren’t so lucky. So that’s why I decided to participate in the iHomeschool Network’s Answering the Homeschool Critics linkup today – not because I get a ton of criticism, but because I want to show that homeschooling, unschooling, and radical unschooling can stand up even against the harshest critics. 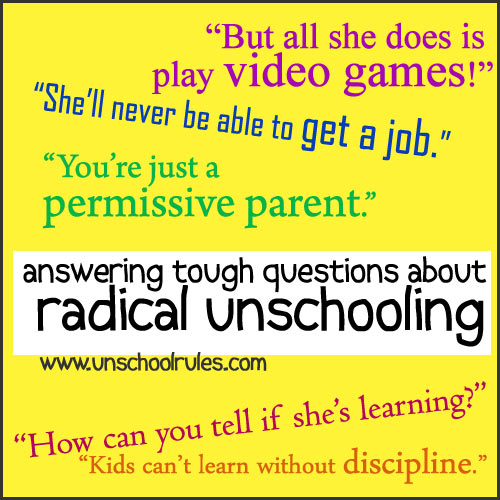 I definitely also want to share some of the ways we respond when hurtful or critical remarks come our way. Much of the time, the people making these remarks aren’t even trying to criticize – they’re just well outside their comfort zone.

So my hope today is twofold.

First, I want to reassure those of you who’ve faced criticism that you can handle it – and that your family’s approach, even if it’s radically different, can withstand it.

Second, I want to share some answers I give to kind of the “frequently-asked questions” or challenges that do come our way, so that those who are reading who maybe really don’t understand where we’re coming from can hear a little more about what we do and why we do it.

And we have loose ideas and interests, but when they change, we’re willing – and in fact geared toward – following them and leaving other interests behind.

That’s the most common question I’m asked: “How will Ashar learn about things she ISN’T interested in, if she only learns what she wants?”

I’ll ask you the same question: As an adult, if you need to know something, are you able to learn it?

I hope the answer is yes! So can Sarah. But needing to know is the key. Ashar is already learning the things she needs to know to live her life.

In turn, you probably (and hopefully) know lots of things that other people don’t. That’s awesome. It’s what makes you able to live your life – a collection of specialized knowledge that has relevance in your world.

Ashar knows that there will be times when she needs to know something she doesn’t currently know. But she knows how to learn it.

The other question we often get in this area is, “How do you know if she’s making progress without tests and grades?”

Do you get tests? Grades? Maybe a performance review at work, or grades if you’re a college student, but come on. Is that how you look at your life on your birthday or on New Year’s Day and think, “Wow, did I get anywhere this year?” I don’t look for a number on a page to tell me that. Neither does Sarah.

What I will tell you is that we talk to our daughter and we spend time with her. When I’m talking to people, usually those who are consulting with me about the idea of unschooling but who are legitimately concerned that they won’t know how their kids are “doing” without grades, I lay out this scenario:

Before your child was school-aged, how did you know if he or she was making progress? Well, you can’t miss it, right? I mean, one day, that baby was laying on her back, the next she was rolling over, then she was toddling, then running, and now she can play tug-of-war with your dog, right?! Do you miss that stuff? Did you wake up one day when your daughter was 4 and say, “Man, how can I tell if she knows how to walk well enough?”

That example sounds silly, but we’ve got to stop second-guessing ourselves and our kids. Talk to them. Spend time with them. If you don’t see the ways they’ve grown and changed and, yes, learned over the days and months and years, spend more time. Talk more. Listen more. 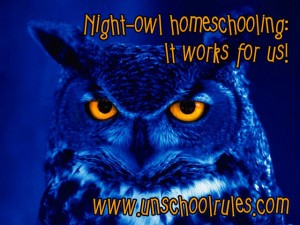 Remember the guy pictured at right?

He’s from a post I wrote earlier this year about homeschooling as a night owl.

In it, I mentioned that we often get questions and, yes, criticism about Ashar’s ability to be awake at 3 a.m. and asleep at 11 a.m.

I’d love for you to read that whole post, because it addresses many of the most common criticisms about our schedule, but here’s the biggest one:

“You’re hurting your daughter’s chances at getting a ‘real job’ someday.” I mentioned before that this was probably the most hurtful comment I’ve received. If Ashar wants to, she can and does get up to an alarm or a parental wake-up call. If she prefers, which she probably will, she’ll get a job that has her starting at 5 or 10 p.m. Hey, it worked for me and her dad!

We trust our daughter to know her body and the times she’s most productive, and we make the same choices as adults for ourselves. It’s OK to be a night owl – or an early bird. We are so thankful that homeschooling allows us to work within our strengths, not schedule our lives at others’ convenience.

I’ve written before about some of our “yeses.” Blue hair. A cell phone for a not-quite-teenager. Watching a movie I didn’t particularly think I was going to like.

It’s a gross oversimplification, but that sums up our parenting style – and really, our family dynamic, because it’s not just about parenting.

We say yes whenever we can. Is there a good reason to say no? Then, sure, we do, or we say “not now.” (We’re, uh, not going to Tahiti anytime soon. Or Australia. That sort of thing.)

In general, people quickly realize that in our family, we don’t really do “rules.” We don’t limit computer/video-game time and, in fact, encourage it.

“Aren’t you worried that ‘all’ Ashar wants to do is play video games?” Well, no. Mostly because it’s not all that she wants to do. She loves it, and she’s passionate about it, and she’s made the best friends of her life doing it. Oh, and she’s learned a ton of stuff too, not the least of which is to type (with accurate spelling) at about 90 words per minute, an employable skill if there ever was one.

But the fact is, it’s not her only passion. We’d be OK if it was, but really, like most human beings, Ashar has a few key interests and divides her time between them. She’s allowed that freedom – and so am I, and so is Chris. Some days, I’m on the computer 10 to 12 hours straight working. Some weeks, I’m at tae kwon do class for almost 2 hours each evening. In our family, we don’t set up an artificial limit between what we can do and what Ashar can do.

“Doesn’t that make you permissive or unconcerned parents?” That’s another criticism we hear. I say the opposite is true – we’re so concerned, so interested, so willing to be present that we take the time to be situational in our decision-making – not to rely on a “rule” for convenience.

When we do have conversations about these topics – with people who are really interested, and not just being critical – I refer them to Sandra Dodd’s page on rules vs. principles. It’s a great read that I think helps explain our lifestyle, and why spankings or groundings or taking away privileges (all of which I admit we HAD tried in earlier iterations of our lives together) aren’t what we choose to do as a connected family.

Update: About a week after I originally wrote this post, my friend Jen of The Path Less Taken wrote an amazing look at this topic called Does Unschooling Mean Anything Goes? I would highly encourage everyone to read it!

How are other families dealing with their own critics?

I’ve shared some of our response to the particular types of criticism our nontraditional approach to homeschooling – and life – sometimes gets.

My friends in the iHomeschool Network are sharing today their responses to challenges that come up in their own situations – many very different, and many very similar to ours.

I hope you’ll check them out here!