Well, now they’re “our former triops.” Apparently, my water-changing escapades weren’t to their liking, and they’ve gone to the great crustacean beyond. My eulogy was “Well, you guys were the best pets less than an inch long that I ever had.”

We’re not lacking in pets – with a house of five cats and a hundred-pound dog, it’s not like animal companionship is an issue. But Ashar has really had an interest in small, more “manageable” pets lately. The triops were a good example of that – always there for her to watch, fairly easy to care for, not independent enough to go off and do their own thing. We’d talked about having fish; Ashar has been fascinated for more than a year with the knifefish family, especially the black ghost knife, but we talked to a really helpful guy at PetSmart today who told us that those fish grow to be about 20 inches long and require a 75+ gallon tank!

So, another pet Ashar’s been passionate about is a winter white hamster. We’ve had hamsters in the past – in fact, quite a few, especially once we accidentally ended up with a pregnant “male” – but never this particular type. Ours were Siberians and other general dwarf species. 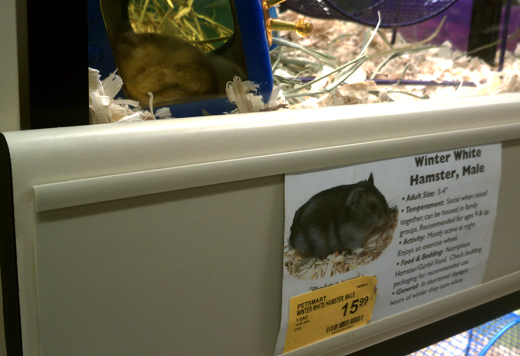 Here he is, in all his PetSmart glory. While we were there today, inspiration struck. Chris and I were pretty close to “yes” on this already, as Ashar had been asking for one for weeks, but, you know, we didn’t want it to be TOO easy.

So, we said, “OK, Sarah. You need to make us a list of all the things we would need to have in order to have this pet. Then, we’re going to find out what the prices are of those things, and then we’ll figure out a plan for how that could work.”

Well, don’t you know, the kid comes home (armed with, from the library, “You and Your Pet Hamster and Gerbil,” “I am Your Pet Hamster” and “A True Book: Your Pet Hamster,” as well as, all the way from 1986, “A Beginner’s Guide to Hamsters” from her own bookshelf) and whips up this: 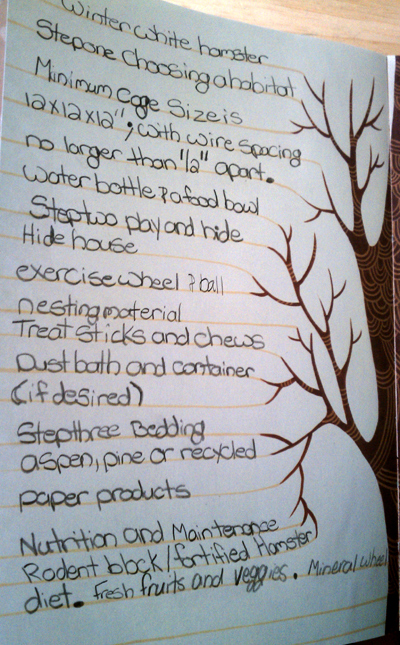 Much of this was taken from a list she found on a brochure, but she worked it all out, made sure everything was spelled correctly, used her nicest handwriting, and even helped me measure the spot where we think a hamster habitat will go so we can make sure to get a good fit. (She specified for her cage, “one with ramps and different levels,” so it’ll be a two-story proposition!)

Guess this means a trip back to the pet store is in my fairly immediate future… wish us luck!