Yesterday, I showed off the main floor of our house, where a lot of our learning and exploring takes place.

It is, however, a three-floor house. We have a finished basement and large second story, but unfortunately in a lot of ways, we don’t make the most use of all those other spaces, or we haven’t until recently!

Our upstairs consists of my mom’s bedroom, a large room – with a walk-in closet, JEALOUS! – that used to be the master bedroom; that’s to the left as you go up the steps. At the top of the stairs is a bathroom, then to the right and going toward the front of the house is Ashar’s bedroom, which is small but cheerfully decorated with a birds and nature theme. At the end of the “hall” to the right is our master bedroom, which is huge but actually terrible to try to arrange. It’s sort of L-shaped, with a full bath inside the “cut out” piece of the L, a horrible vanity with Hollywood lights, and almost no windows. It was created by the house’s former owners by raising the roof over the garage, and it’s … well, it’s a testament to why you should hire contractors for large projects, let’s leave it at that. It has two TINY closets, and that’s it!

The weirdest part, though, is the area outside Ashar’s bedroom and ours. The hallway runs the length of our upstairs, but jutting off to the left as you go toward our room is a space about six feet by nine feet that’s just completely open. Nice area with a window, but it’s not exactly a “room.”

We’ve never been exactly sure what it was supposed to be, so just about since we moved in, it’s been Ashar’s playroom, allowing us to store her toys outside her smallish bedroom. It’s been more or less OK, but she hasn’t recently spent a lot of time up there, instead bringing things she wants to do downstairs, so it’s kind of been a very visible closet. (Ugh!) 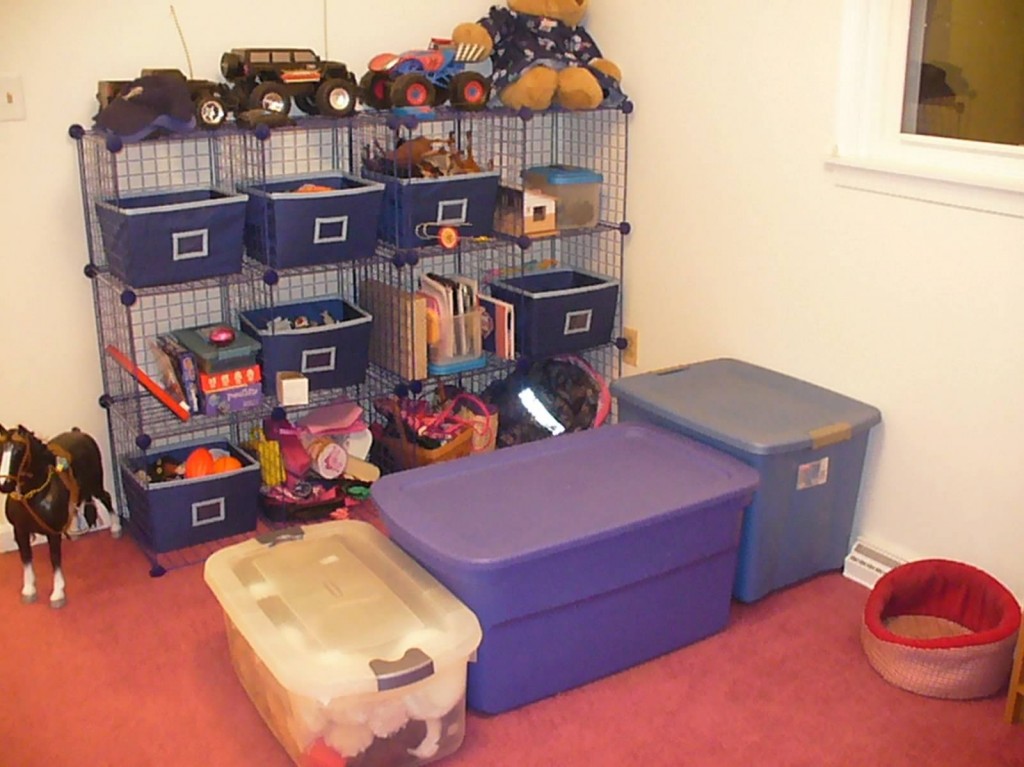 his was the playroom at its probably nicest stage… right after we’d done some cleaning in maybe 2009 or 2010. Bins of stuff, even when organized neatly, still kind of looked like a room full of bins of stuff, you know?

Meanwhile, our basement has a large living room, complete with wood stove and couch (and our laundry area), as well as a bedroom and full bath. That bedroom, which we formerly rented out to different friends at various times, is now both our occasional guest room and the home to our online bookstore business inventory as well as Chris’s burgeoning ephemera collection. Basically? Room of books and paper.

The family room had, again until recently, not been used very much. We stored our board and card games down there… did the wash… and had a table for my scrapbooking supplies and a table for my mom’s sewing supplies pushed against one wall. No one really spent any time there, and it showed, because things would pile up all over the place and no one (read: me) seemed to care enough to do anything about it.

Well, then came Sunday’s cleaning project… I kind of freaked out about the overwhelmingness of trying to straighten it up… and Chris and Ashar came up with a REALLY GOOD idea.

Ashar and her friends have started hanging out in the basement a lot. We can hear them, but they get to “feel like” they’re more set apart than if they sit and talk in the living room. Not only that, it’s got a fun couch, games… they really like it.

So we moved ALL of Ashar’s playroom stuff down to the basement and went all-in on the idea of creating a rec room for Ashar and her friends to hang out in. The upstairs “bonus space” that was previously the playroom is now a nicely-lit hobby space for my mom’s sewing and my scrapbooking. 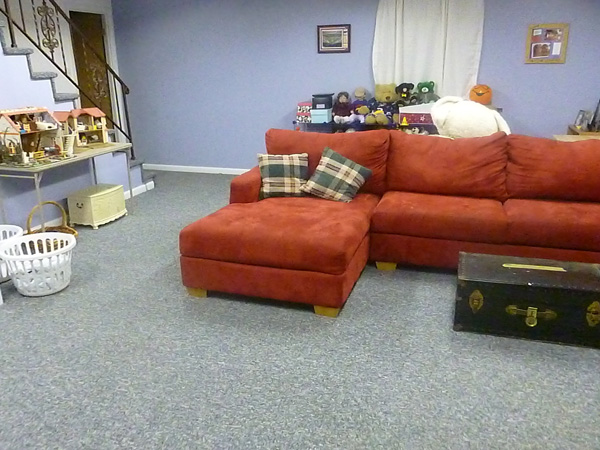 Here’s a look at the mostly-finished rec room now. You can see our super-awesome couch, which is incredibly comfortable if a bit misshapen. 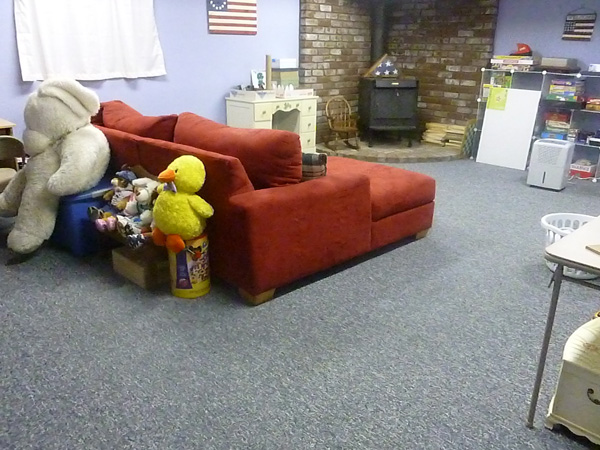 And here’s a view as you come down the steps. Along the back wall there are our games, and to the right of that is the laundry space. Notice the big white thing at left? 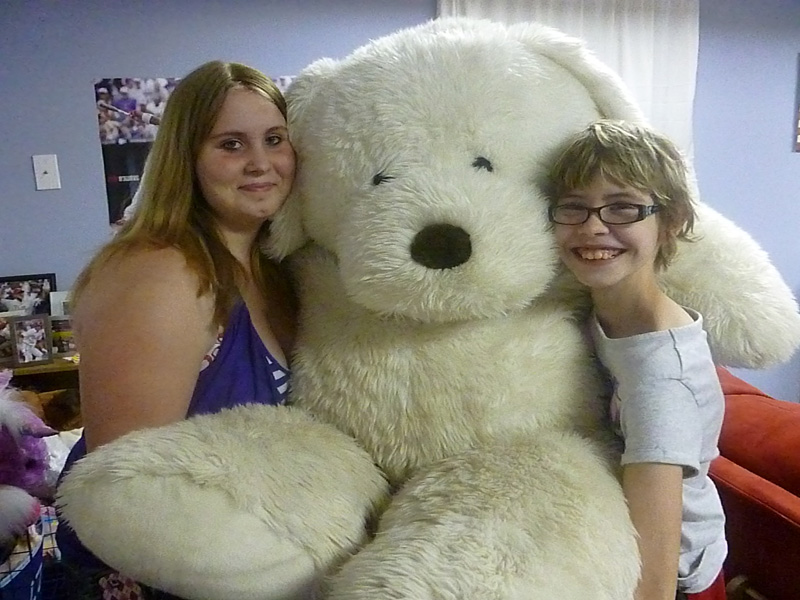 That’s Dudley. He was a “gift” from some “friends” in a white-elephant swap about six years ago. And by “gift,” I mean “large curse” and by “friends” I mean they’re LUCKY they’re still my friends.

Dudley is REALLY big. Did I mention big? Finding room for him is a consistent challenge. That’s one of Ashar’s best friends and my so-called extra daughter Kayla at left, with Ashar at right, helping to model the poor beast. 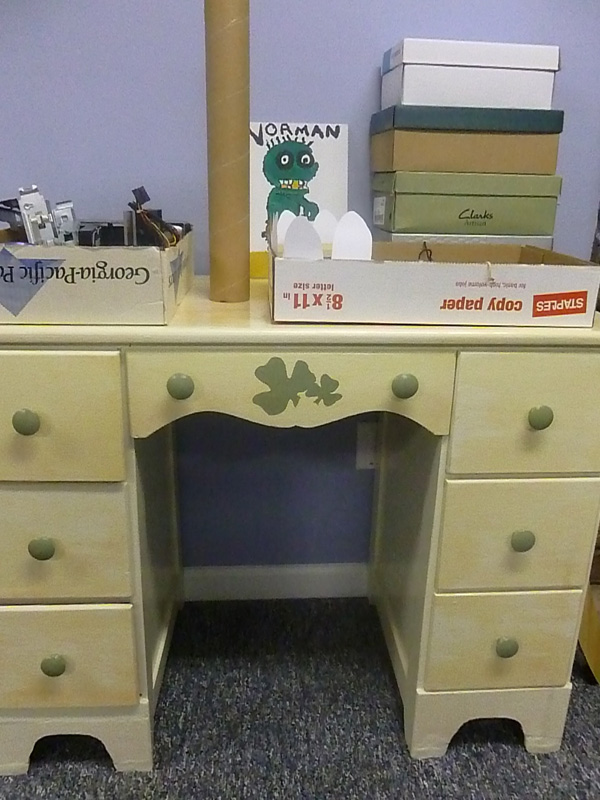 This is my mom’s former desk (from before she remodeled her bedroom, which she just finished!) This is where all of Ashar’s cardboard tubes, yarn, wheels, spools, bottle caps and other building supplies are kept. The box at the top left is actually the computer parts she saved after tearing our old desktop apart, and Norman there is a zombie (from the iPad game Zombie Farm) that Ashar painted on Valentine’s Day this year with her dad. Sweet! 🙂 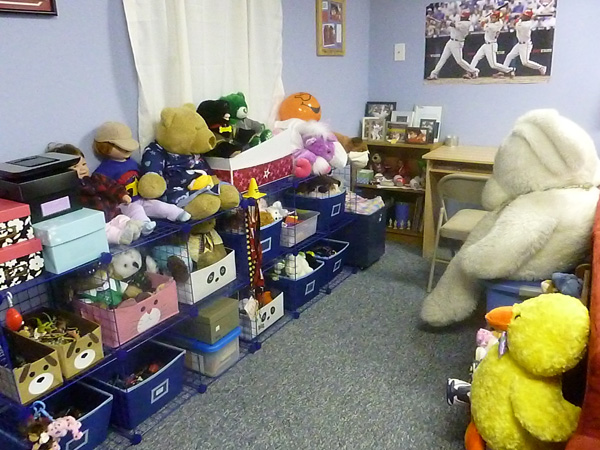 And, if you remember the bins from the former playroom upstairs, they’re still here… against the wall and behind the sofa. But now, they look like they belong, and they’re easy to get to in a place where the stuff in them will be used.

Everyone wins… and my house looks better than it has in a long while! Well, except for those scrapbooking and sewing tables (notice, no photos of those yet!) But we’ll get there!