I didn’t think I was going to “do” a word to live by for 2013. I don’t do resolutions, really. I set goals, but in a more fluid and project-based way than a date-specific one.

I started reading all sorts of my blogger friends’ posts about their words – and they’re just amazing. Eloquent stories about how they’ve been led to something that will guide their lives for the year ahead.

And I didn’t have that. Instead, I had a feeling that I didn’t want to have. I didn’t like the direction I have been feeling led for the past several months, because I’ve gone past the easy part of it and am face-to-face with the hard stuff. 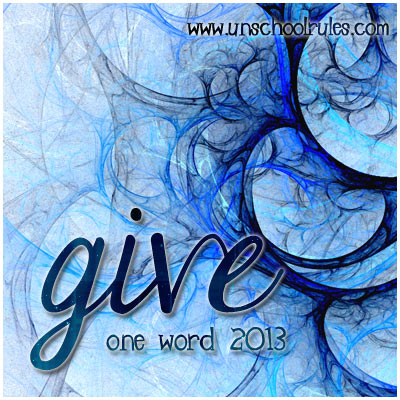 I’ve been feeling called more and more to give. And you know what? For a while, I thought I was really doing great. We made a commitment as a family to give away the same amount of money as we spent on gifts for friends and family members at Christmas – and we succeeded, which was awesome. I’ve started taking part in a group on Facebook called Do One Kind Thing, which hopefully is pretty self-explanatory, and as part of that have been able to help some local families in need, have been inspired to pay for the meals of people behind me in drive-throughs, all that jazz.

I’m in a different place in my life than I used to be. It used to be very hard for me to give financially. While we’re far from rich, we are fortunate in a lot of ways, and we are, I think, pretty good at giving financially without fear.

Last month, I heard a talk I didn’t want to hear on giving.

It was about giving sacrificially. Giving what it hurts to give.

And that, my friends, I was trying real hard not to hear.

2013 for me needs to be the year of giving. It will certainly involve giving money – possibly in bigger ways than I’ve yet imagined. But it’s going to involve some other giving, too.

It means giving my time. (Ouch. Not so great at that.) To my family, to friends, to anyone who needs it, and doing so unselfishly and un-grumbling-ly. Not putting off those people who I should call or visit or write a handwritten letter to.

It means giving my patience. Not a gift I give very often, sadly, and something I’m called on to give way more of, both to people close to me and to complete strangers.

It means giving myself. Putting myself out there. Being open. I tell people a lot that I’m an open book, and in a factual sense, that’s true. There isn’t much of my life that I don’t write about publicly, so, you know, I sometimes act like I’m “putting myself out there.” The fact is, I’m not, at least not always. I don’t show major pieces of who I am to a lot of people because they’re messy and hard to deal with.

It means giving TO myself. Especially in the past six months or so, I haven’t done as much as I should to fill my own cup before pouring it out, and that not-giving (to myself) is really starting to show its ill effects.

I’m going to GIVE.

In ways I want to, and ways I don’t. Writing this post is the first gift I’m giving to myself – I’m putting it out there and asking for you to hold me accountable in friendship and love, and I’m hoping you will give me that gift in return!