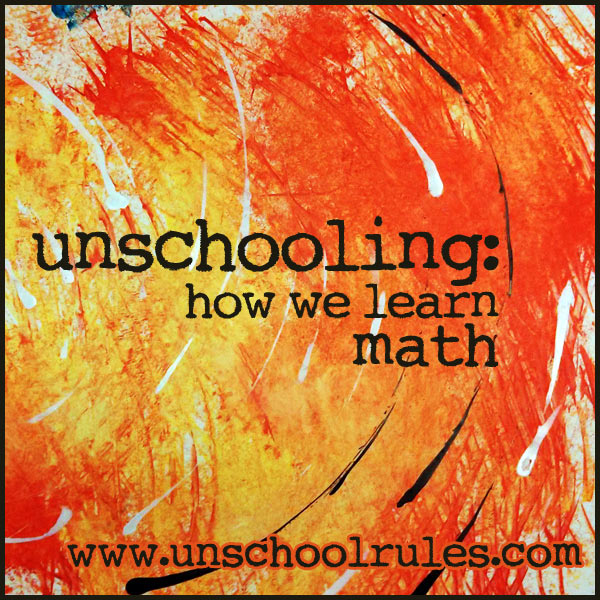 In our family, we don’t “do” subject areas. We don’t really do tests, quizzes, essays or worksheets.

We’re radical unschoolers, and we believe that learning happens all the time, and for us, it rarely happens in tightly defined areas like “social studies” and “grammar.”

That said, I get a lot of questions from people who are unfamiliar with unschooling and wonder, “But how do you teach math?” (Or any other subject!)

That’s why I agreed to take part in the iHomeschool Network’s “5 days of…” Hopscotch series this week, in which I’m joining a bunch of my fellow bloggers to share how we “teach” language arts, math, science, history and fine arts.

It’s a little bit of a trick… because I’m not going to talk about teaching at all.

Instead, I’m glad to share how we learn, radical unschooling, eighth-grade-ish daughter style!

If you wonder how our learning happens “beyond the curriculum,” read on. Today, we’re tackling my favorite subject, unschooling math, and sharing some looks at how it happens in our lives.

This is actually such a big thing in our lives that I gave it its own five-day series in July 2012! 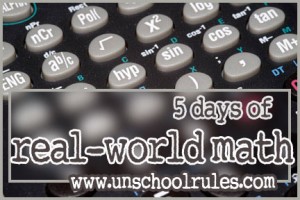 I hope you’ll check out five days of real-world math.

I also share my list of top real-world math resources you’ll love – our key to unschooling math at a practical level.

Because my daughter, Ashar, is now a teenager, the question I’m most often asked is about algebra. I admit that this makes me smile sometimes.

To be blunt, Ashar’s arithmetic knowledge (like, 7 times 8) is sometimes not the strongest. HOWEVER. She does algebra for fun, and does it well.

It actually started with science. Ashar decided on her own that she wanted to learn chemistry this year. While we haven’t been working straightforwardly through any particular text or lesson plan for this, she’s hit on something she really seems to enjoy…

Balancing chemical equations. She starting doing this via Uzinggo and moved on to doing some other examples she’s found in a variety of sources.

This is 100% algebra, and somehow Ashar finds it fun – because it has a practical application to a topic she enjoys.

Meanwhile, because there are REALLY only so many chemical reactions you can balance, in our quest to find her something similar, we started playing around with the DragonBox algebra app. I say algebra app, and that’s really what it is, but Ashar treats it like any other app game for her iPod Touch, and she’s enjoyed flying through the first five “worlds” of levels.

One thing I need to be really clear about: We’re not doing these things because we they’re algebra. We’re doing them because Ashar is interested in them, and the fact is, it’s cool that we can ALSO say, “Oh, hey, by the way, did you know that you now know how algebra works?”

Fundamentally, algebra is about sitting a system of equations on top of the real world. DragonBox has helped Ashar see all the ways you can conceive of and manipulate those systems; Uzinggo has shown her an example application of when you might apply such a system and why.

But the thing that fits in with that is that we aren’t trying to have “algebra course” come out of this. We’re not doing algebra worksheets to solve for X. While we’re occasionally diving into the stories in Life of Fred: Pre-Algebra 1 with Biology, we’re focused MUCH more on the biology piece of that, actually, as the math is a little simplistic at this point. (And we’re doing this infrequently – just as it catches our interest among our other reading!)

What we are doing is using the things Ashar has already encountered on her own to start conversations that drive us deeper. We might not work out algebra problems even weekly, but we talk about how algebra works in everything from grocery price calculations to our family budget almost daily!

“But what if she needs to learn trigonometry or calculus?”

Well, my answer to that is simple – if Ashar wants to or needs to learn those things at any point, I know that she has the skills needed to do so, and I know that I can help her, either directly or by putting resources in her path. (I’m looking at you, Life of Fred college series!)

The bottom line is, as a math major, I learned one thing above all else. Advanced math is NOT about computation or memorization. It’s about knowing how to learn, which is very different.

And I’m confident that my daughter is doing great at learning to learn, which means I’m not worried about advanced math in the slightest, should her need for it arise!

Side note: Since I mentioned Life of Fred, I want to add that while it is described as a Christian series, we are a secular homeschooling family and haven’t had any problems using the fairly few spiritual references we’ve found as talking points about what different people believe, which we like to do anyway.

Finally, this post is part of the How to Teach Without a Curriculum linkup through the iHomeschool Network. Click the image below to read more posts on teaching without formal curriculum!

12 thoughts on “It’s not all about numbers: Unschooling math”