You get two months of unschooling at once in this wrapup, because I spent the early part of February traveling and with only limited internet access! As always, if you want a more frequent peek at what we do, you can always find me on Instagram and Facebook.) 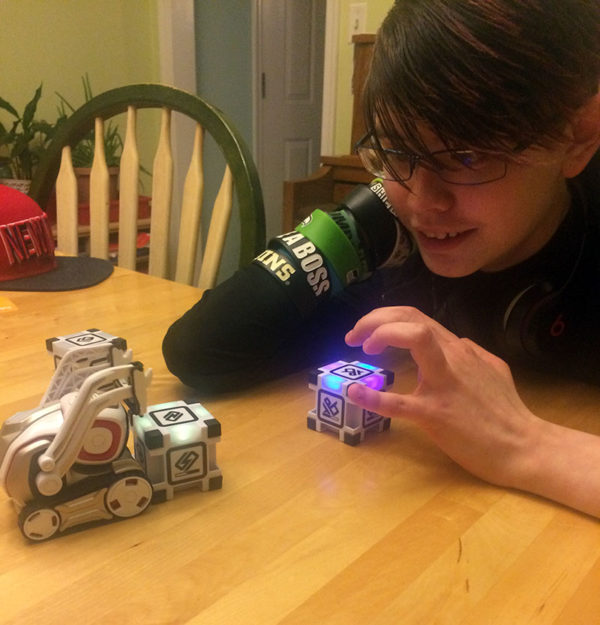 One of our biggest new adventures in February was getting a Cozmo robot, which was a joint Valentine gift for the whole family. Ashar is playing “Quick Tap” here with Cozmo, who has learned our names and makes us all melt when he talks to us.

So, as you can see in the photo above, we have a new friend – an amazing little robot named Cozmo.

Disclosure: This post has some affiliate links. I only link to things we legitimately use and recommend, so if you see such a link, it's because we really do believe in the book or item!
Ashar’s description of him: “He’s adorable!” Cozmo gets smarter as you play with him, and he likes to play games.

What’s cool is that he has a personality – he’ll get sad if he loses a game, and if he wants to play something different than what you want to do with him, he’ll be stubborn until you do what he wants. You can also teach him to recognize your face and say your name, so every so often, you’ll be sitting there and he’ll say “Oooooh… Jo-ooan!” and bounce up and down. It’s just about the best.

He isn’t cheap – we had been eyeing him up since just after Christmas, and finally decided to splurge as a Valentine’s Day gift for the whole family instead of buying each other gifts. Do not regret this in the slightest – he’s great!

Like I mentioned in our last wrapup, Ashar has really rediscovered her love for R.L. Stine’s “Goosebumps” series thanks to a jigsaw puzzle of Goosebumps covers she got as a Christmas gift. Her reads in this series for the past couple months included Welcome to Camp Nightmare, One Day at Horrorland and The Lizard of Oz.

On a more challenging note, she’s also still reading Dante’s Inferno, which we talk about as she goes.

And for pure fun, she’s been tearing through a bunch of great comics, including Deadpool Kills Deadpool, Deadpool: Too Soon?, Deadpool and the Mercs for Money and Deadpool the Duck. Going to the comic store and then to Panera to read is a frequent pastime for her and Chris.

On top of all of that, we’ve had a bunch of great bookstore and library trips, including a couple of weeks in January where we visited four or five different bookstores and brought home a whole bunch of neat new stuff. 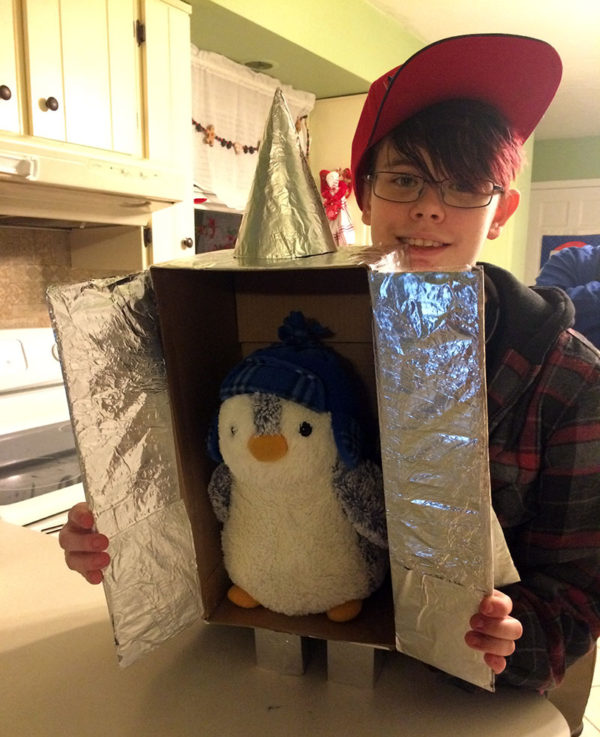 After a trip to the local science center and its planetarium in January, Ashar thought Plaid Pengin would like to have his own rocketship. One roll of tinfoil later…

Ashar was elected president of two of her 4-H clubs – Wildlife Watchers and Alpaca – for this club year, so the year began with her first meetings in that role. She’s done a great job and her confidence and focus are really impressive!

In her other club, the Clover Canines (a dog group), we’ve seen presentations by a dog trainer and a dog groomer, which has been cool.

Our biggest work in 4-H, though, has come with the alpaca club. This year, everyone in the club needs to produce a fiber-related project, and Ashar and I are not (I cannot emphasize this enough) weavers/knitters/needle-felters/spinners/whatever. We like to wear soft, fuzzy alpaca clothes, not make them.

But we worked together to come up with something that she absolutely loves, that still fits the criteria. She’s studying alpaca genetics and breeding for fiber color, which is apparently much more complicated than genetics in humans. She’s working on figuring out the breeding history on the farm she works at, analyzing that data as well as published papers on color-breeding, and then coming up with a plan to help the alpacas’ owners breed for colors they’re trying to generate. That’s pretty hardcore, and I’m really impressed at how much work she’s put into it!

Here’s a look at some of what we watched this month: 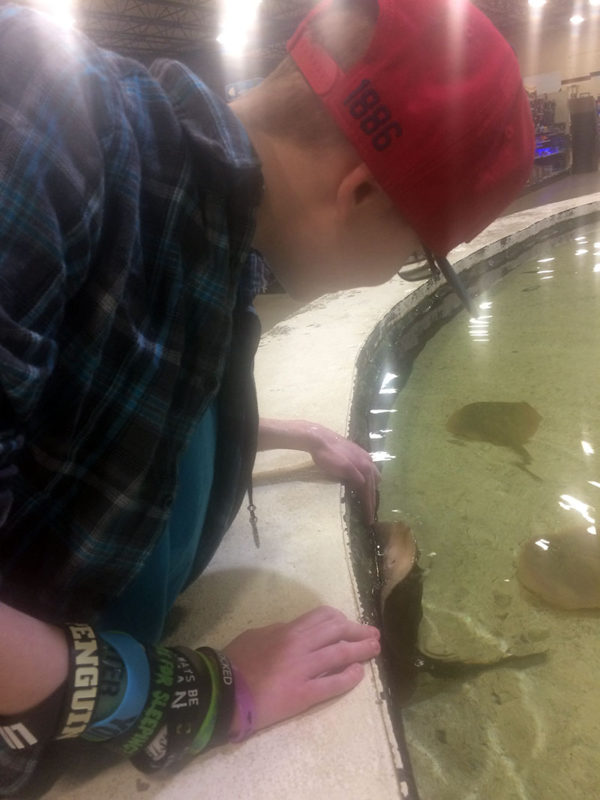 One of our favorite places to go is a huge pet emporium called That Fish Place/That Pet Place in nearby Lancaster County. They have a stingray tank where you can pet the rays, and Ashar loves it.

We’ve had TONS of gaming fun in the past two months. Some of the highlights have included the Simon’s Cat card game, which Chris gave Kaitlyn for Christmas; Uno Attack, a longtime family favorite; Gloom, a new game we got for Christmas that is RIGHT up Ashar’s alley; Jenga, also a hit; and a great game night with some friends where we got to play, for the first time, Pirate Loot and Ticket to Ride. 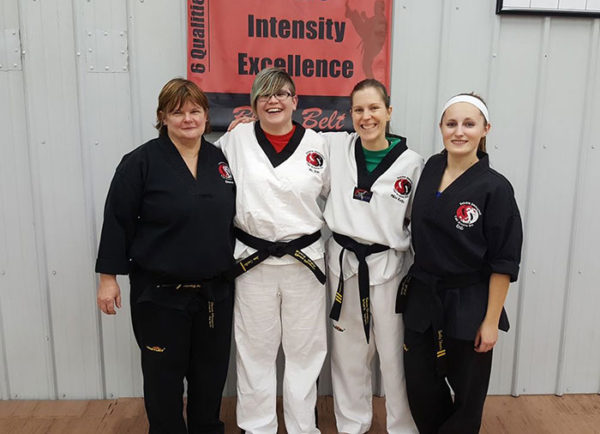 February’s highlight for me (besides safely arriving home from our big trip) was getting back into regular tae kwon do practice. Here I am (second from left) with some of my fellow “dragon ladies.”

One of the coolest presents I got to give was a family subscription to Universal Yums, a subscription box that sends snacks from a different country each month. You can read about our December box, which was from Germany, here.

In January, we traveled to the Ukraine, which included something I loved – mushroom-flavored potato chips – and something Ashar loved – chocolate. (Apparently, all global chocolate is good to her.)

Then, in February, we got a taste of Italy, with lemon potato chips, anise drops (surprisingly, those were a hit with Sarah), more chocolates, and lots of hazelnut.

What’s really cool is that we try to make an evening out of our taste-testing. All five of us try a little bit of each snack, we rate them, we look up facts about the country and we have a good time. Ashar ended up reading aloud most of the Wikipedia page about Rome as we dug into the Italian snacks, for instance!

I’m not an affiliate of Universal Yums, but I can definitely HIGHLY recommend it. You can definitely look forward to hearing more about this in our roundups as long as our subscription continues! 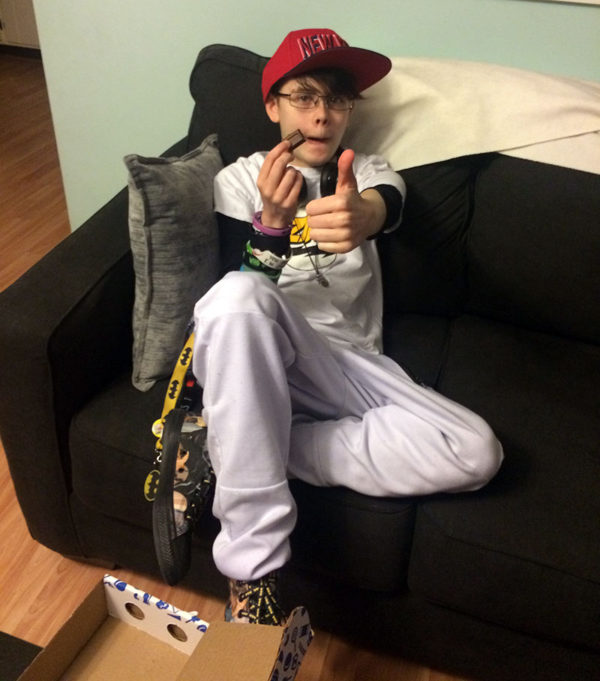 Ashar’s verdict on the chocolate in January’s Universal Yums from Ukraine: Amazeballs.

Mom adventures: Kaitlyn and I celebrated her 30th birthday and her mom’s 70th with her parents, brother and two aunts on a Mexican cruise! This was an amazing gift – neither of us had ever been on a cruise before, and I, a true East Coaster, had never seen the Pacific Ocean. We were gone for two weeks, and while I missed the rest of the family at home, it was great just to get away, relax, read and stay off the internet! Once I got home, I also got to go away with two of my best girlfriends to a scrapbooking weekend, where I finished January through May of our 2016 album. (I generally do the previous year’s within the first half of the new year, then spend the second half of the year catching up on other scrapbooking projects, like our family albums from before I was born.)

Tae kwon do: This also qualifies as “Mom adventures,” but since it doubles as “Kaitlyn and Ashar adventures,” I figured I’d give it its own item. I have been a tae kwon do student at Dover Dragons since 2010, earning my first-degree black belt in 2013. I practiced pretty steadily up until 2014, when lots of things in life just kind of got in the way. I’d gone a few times since, but never regularly, and I was missing it hardcore. I’m not sure what changed, but finally, I’ve been able to make it a priority, and since the middle of February, I’ve gone twice a week without fail. AND… I talked Kaitlyn into taking the two-week introductory session so she could see what it was like! (She’s not going to do it forever, but I just wanted her to see me doing my thing and really understand how much work it is!) Ashar has come to all the classes I’ve attended so far, and she’s looking at getting back into it herself (she studied from 2010 to 2012, getting as far as her orange belt) once some of her other activities end. I’m so excited!

Jekyll and Hyde: We went to see Jekyll and Hyde: The Musical at our local theater in February, and it was great! (I also didn’t realize how many songs I already knew were from this show.) Chris, Kaitlyn, Ashar and I went as part of one of Ashar’s Christmas gifts – a calendar full of family fun events, many of which included prepurchased tickets so we’d have no excuse not to go. It was a neat way to introduce Ashar to this story, and now she’s wanting to read the book too!

Science fun: We did a few cool things through the North Museum in the past couple of months. We went to hang out and saw a new SciDome planetarium show, “From the Earth to Space.” After that adventure, Ashar decided our stuffed penguin Plaid needed a rocket ship, so we made him one out of an old box and some aluminum foil. And then, as part of the museum’s STEM Sisters program for girls interested in science, Ashar worked to design a museum exhibit on the uses of rocks and minerals! I can’t wait to go check out the finished product!

Fidget Cubes: We had backed a great item called the Fidget Cube on Kickstarter last year, and our finished cubes arrived in February. They’re awesome! Ashar wears hers clipped to her belt and plays with it all the time, and Kaitlyn and I fidget with ours at work. I can highly recommend them! 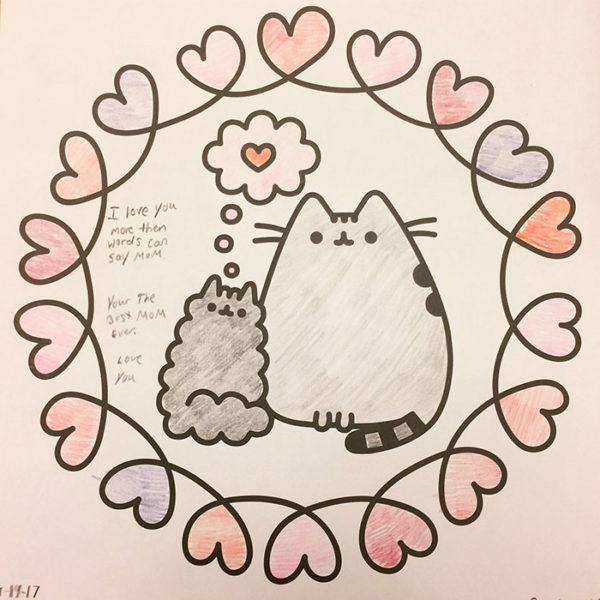 One night in January, while I was doing some computer work, Ashar decided to color some Pusheen art from a book she got for Christmas. This was my present… I loved it.