That’s been our house for the past few months, as Ashar has pursued a new interest in James Bond, as evidenced by the growing collection of books and movies you see here.

But of even more interest to me (because, you know, I’m a words person) is the life of Bond’s creator, Ian Fleming, whose birthday would have been this month. I’m joining some of the other iHomeschool Network bloggers for a celebration of some noted May birthdays, and Fleming was my top pick! 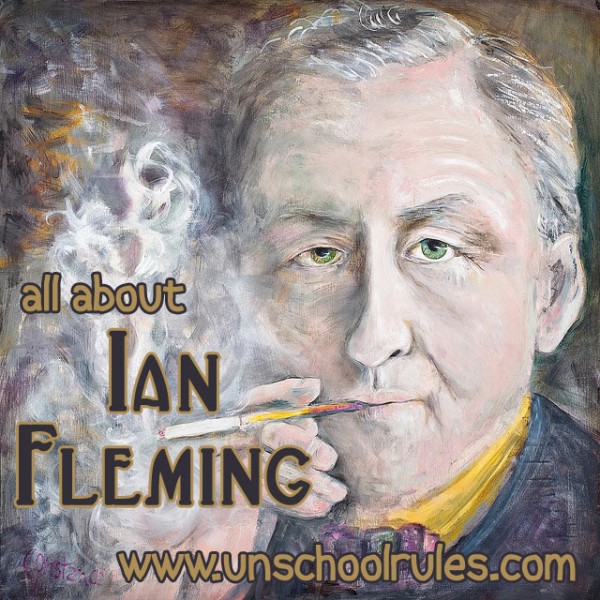 All about Ian Fleming

If you ask Ashar about Ian Fleming, he can tell you what she considers the coolest fact about him: His middle name is Lancaster.

Disclosure: This post has some affiliate links. I only link to things we legitimately use and recommend, so if you see such a link, it's because we really do believe in the book or item!
That’s probably only going to make sense to you when you realize that our neighboring county to the east is… Lancaster County. We’d not to this point known anyone with that as a first or middle name, though, so that’s what stood out!

Another interesting tidbit: Fleming’s vacation home in Jamaica, where he wrote many of the the Bond novels? He had named it Goldeneye, which although iconic in the Bond film collection, was not ever a Bond book title!

All about James Bond

Fleming’s first Bond novel, Casino Royale, was completed in 1952 and published the next year. Between that time and Fleming’s death in 1964, he wrote 14 James Bond books, two of which were published posthumously.

So, why Bond? This video shows Ian Fleming on camera, talking about how the name for his hero came to be.

When Fleming died, he was only 56 years old and had only been able to see a handful of the movies made from his character and his stories. In fact, the latest James Bond actor, Daniel Craig, wasn’t even born until 1968!

I certainly didn’t know that Ian Fleming had done much of lingering renown beyond the James Bond series. Even my movie- and book-loving husband couldn’t come up with anything else.

But guess what I found out?

Fleming was also the creator of Chitty Chitty Bang Bang, which he wrote as a children’s story for his son, Casper, shortly before his death! You can read more about that story on the official Ian Fleming website here.

Many of the facts I’ve shared today came courtesy of a book Ashar bought just before her birthday: James Bond FAQ by Tom DeMichael.

This isn’t a kids’ book – it goes into detail about Fleming, as well as all the Bond movies, the Bond girls, the weapons and more. We think that the best thing to do is talk about issues like that, not ignore them, and it’s sparked some amazing discussions with Ashar, including his notes about things that kids and parents should know about Skyfall, his current favorite movie.

Meanwhile, if you want to read more, here are some websites that have helped us explore Fleming and Bond!

If you think your kids would probably love the action of James Bond but you’re concerned about the more adult themes, like violence, sex and drinking, definitely consider pre-screening the movies (and the books!) in advance.

But don’t write them off – there are a ton of great topics for discussion from both Ian Fleming’s novels and the Bond movies.

We’ve had great conversations on many of the following:

And thanks for stopping by to help me wish Ian Fleming a (posthumous) happy birthday in thanks for all the fun times he’s brought our family!