You know, when most people go to used book sales, they buy books. Books, which even en masse, are fairly small in size.

We seem to have… other ideas.

You might remember that last year, we went to our homeschool association’s curriculum fair and came home with a gigantic blank timeline.

Or, at the time I thought it was gigantic.

I’ve since changed my perspective after going to the “we’re closing the library” sale at, of all things, a local church, and having Ashar, who wasn’t super-interested in most of the books or CDs there, spot something fairly ginormous leaning in a corner.

“Is THAT for sale?” she asked Emily, the woman from the office helping organize the sale. Emily wasn’t sure, but she said she’d put our name on it as interested, and someone would let us know.

The “that” in question? 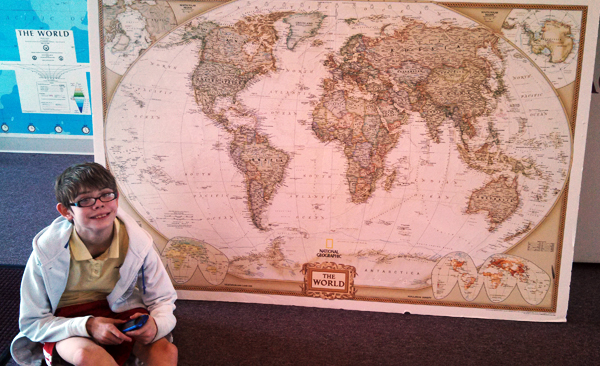 Yes, that’s a six-foot by four-foot National Geographic map of the world mounted on foamboard.

And yes, that’s Ashar sitting with it in the lobby, where, after finding out yesterday that it was ours for the taking, we waited for a bit after the service until our friend Dustin could come by in his pickup truck to haul it home. (After, of course, we tried several unsuccessful ways to get it into our car!)

This thing is HUGE.

So when we got it home, we couldn’t even begin to figure out where to go with it. We didn’t have a place that was both big enough to fit AND prominent enough to suit Sarah.

That is, until I said, “Uh, Ashar, what if I try to put it on the wall along your bed?” 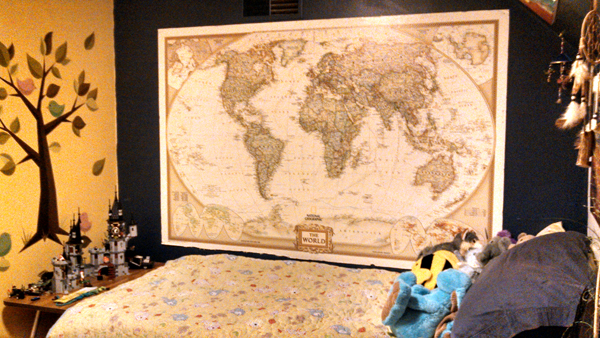 That was a huge undertaking, especially since it’s pretty hard to hang ANYTHING on our not-super-well-built walls, but we made it work, and here it is in all its glory! (Some of you have seen a snapshot of this on our Facebook page already; now you know “the rest of the story.”) 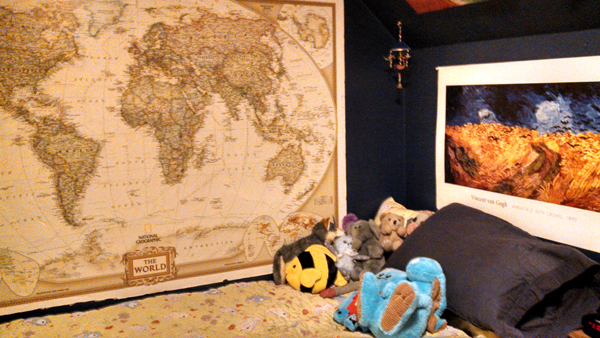 I should do a post in the future on Ashar’s entire room. It’s small, and tucked into the eaves of the house, so we get very creative with space. (As you’ll see in some of the pictures, there’s a table at the foot of the bed with Legos, and you can just glimpse a painting of Ashar’s hung on the eave at an angle over her head; let’s hope I attached it well enough!)

Meanwhile, Ashar also received her birthday gift from good friends of ours who had been carrying it around for a while. Meet her new elephant (not life-sized, but still pretty big!) 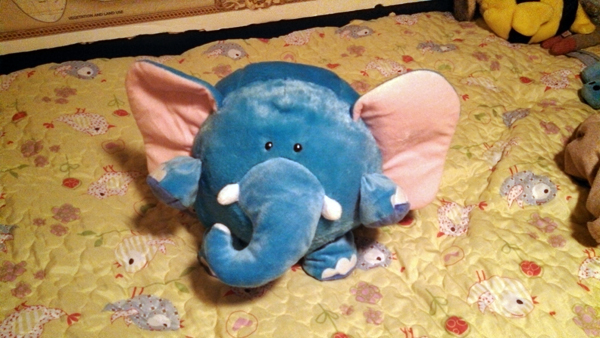 Best part? When we went up to bed last night, Ashar and I spent easily 45 minutes sitting on her bed, examining the map, the countries, the capitals, the time zones and more. We found places where movies were set, places we wanted to visit, places whose capitals we’d heard of, places with funny names, places where our virtual friends are living, places where some of our favorite books and historical events took place, and more.

And that’s when Ashar found the perfect name for her new elephant.

And we’re glad he’s found a home in the shadow of the Great Map.