Two of the biggest film series of all time, and six decades of movie-making experience – so much so that all the ladies in our house (ranging in age from 13 to 78) find his various “iterations” pretty handsome?

Yes, that’s Harrison Ford, who will celebrate his 71st birthday on July 13. In honor, and as part of an iHomeschool Network celebration of some noted July birthdays, I thought it might be fun to talk about how our family has enjoyed Indiana Jones, Star Wars and more. 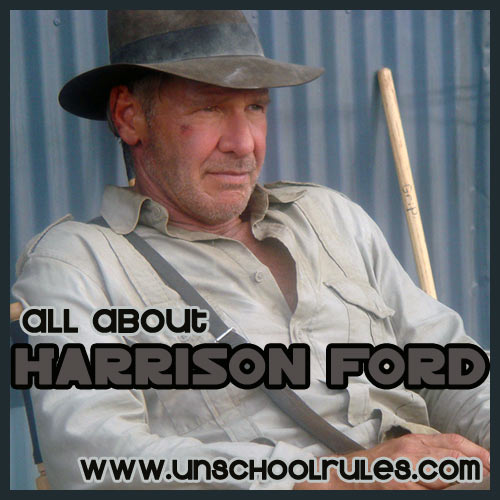 All about Harrison Ford

Disclosure: This post has some affiliate links. I only link to things we legitimately use and recommend, so if you see such a link, it's because we really do believe in the book or item!
Although he was the son of a former actor and radio actress, it wasn’t until Harrison’s final year of college, when he took a drama class to help deal with his shyness, that he became interested in the art of acting.

Start in the mid-1960s, Harrison Ford had several small roles in various movies. He was often credited as Harrison J. Ford in his early work to avoid confusion with a famous silent film star named Harrison Ford – much in the same way that Michael J. Fox adopted the J. in his own name!

The roles he got early on were so poor, though, that Ford learned to work as a carpenter so that he could support his wife and young sons. During that time, he was a stagehand for rock band The Doors as well… but his big break came when George Lucas hired Ford to build some cabinets!

Harrison Ford’s work with George Lucas did lead directly to his casting as Han Solo – but not in the way you might think.

Lucas actually originally paid him to read lines TO the people really auditioning! But he did so well that he landed the role of Han Solo himself, and performed the part in Star Wars in 1977, The Empire Strikes Back in 1980 and Return of the Jedi in 1983.

Now, I admit, I’m not a big Star Wars fan – at least not the original trilogy. My husband, Chris, is, and Ashar likes it pretty well. For my part, I think Princess Leia is… well… whiny! I’m certainly thrilled to see a female lead in movies from that time, but I am much more the new trilogy/Amidala type.

That said, here’s something Ashar LOVES: Lego Star Wars. Especially Lego Han Solo, who she has as an actual minifigure. But even more, she likes to play as his character in Lego Star Wars for Wii, which is one of her all-time favorite games!

So we owe Harrison Ford for the work he did even before I was born, because it turned into something that we all enjoy now! (And in the recently announced NEW Star Wars Episode VII coming out in 2015, Ford has already agreed to reprise Han Solo, so that, I’m excited for!)

When Raiders of the Lost Ark came out in 1981, Harrison Ford marked his start in the second major series of his career (which would later also include Blade Runner, Air Force One, Patriot Games and many other action films).

But once again, Harrison Ford didn’t get the title role in the Indiana Jones series because he was the top pick, or even because of his working relationship with George Lucas. In fact, Lucas DIDN’T want to hire him! But Tom Selleck, the first choice of Lucas and Steven Spielberg to play Indiana Jones, couldn’t take the role because of his contract on Magnum, P.I., and Ford was cast only about three weeks before filming began.

This series remains a family favorite – including the newest movie, Kingdom of the Crystal Skull, which some people kind of panned but which we loved.

(Funnily, for all that Indiana Jones hates snakes, Harrison Ford actually has a lot of experience working with reptiles and other generally creepy things; he even has a species of spider and a species of ant named after him, a rather dubious honor!)

Anyway, like with Han Solo, Lego Indiana Jones is also a favorite of Ashar’s especially. We don’t have his minifigure, but we do have his Wii game!

Meanwhile, I’ve been watching the Indiana Jones series with a new eye now that I’m taking the Archaeology’s Dirty Little Secrets class through Coursera. Seeing that portrayal of archaeology is pretty different than the real job, but it still makes for good watching!

We’ve been talking a lot about archaeology as it relates to my online course, which Ashar has been auditing with me. Thinking about the Indiana Jones series really brought up a lot of questions that we’ve worked through.

And thanks for stopping by to help me wish Harrison Ford a happy birthday!

4 thoughts on “A birthday celebration: Harrison Ford from fedora to lightsaber”