This man might have more famous lines than anyone in movie history.

“Houston, we have a problem.”

“YOU are a child’s plaything!”

Of course, it’s Tom Hanks, who will celebrate his 57th birthday July 9. And as part of an iHomeschool Network celebration of some noted July birthdays, I thought I’d share more about Tom and his work.

Specifically, I’d like to talk about one of the topics he’s drawn attention to in several films: the space program. 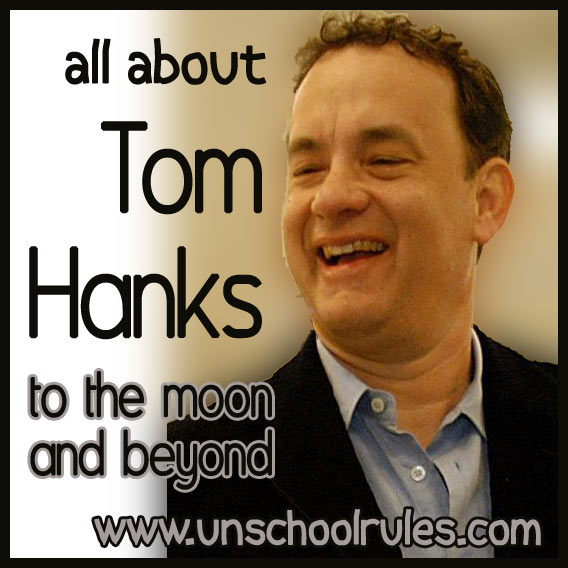 All about Tom Hanks

Disclosure: This post has some affiliate links. I only link to things we legitimately use and recommend, so if you see such a link, it's because we really do believe in the book or item!
Tom Hanks was born in California on July 9, 1956.

He’s been acting in TV series and movies basically my entire life – after first hitting it big in “Splash,” one of the funniest movies I’ve ever seen, in 1984.

Since then, he’s acted in and produced and written and directed dozens of big-name films, TV shows and miniseries, among them Sleepless in Seattle, Forrest Gump, Toy Story, Apollo 13, Saving Private Ryan, From the Earth to the Moon and Catch Me If You Can. He’s ranked as the star with the highest money-making films of all time, grossing more than $3.6 billion at the box office for all his films.

Certainly there are a ton of famous and heavy-hitting Tom Hanks projects. And he’s not afraid to tackle huge issues and varying historical periods. Philadelphia, in which Hanks plays a gay lawyer, won him an Oscar; Forrest Gump tackles everything from the Vietnam War to mental disability to race issues; and Saving Private Ryan looks at the issues surrounding World War II.

In our family’s case, though, the big issue and time period that we’ve explored through Tom Hanks’ films is that of the U.S. space exploration program.

I mentioned when I shared our unit study on the solar system that we’ve enjoyed the miniseries From the Earth to the Moon that Hanks produced. This is a PHENOMENAL series!

Probably more famous in this arena is Tom Hanks’ starring role in Apollo 13. It was especially interesting for us to see how Hanks approached the Apollo 13 piece of the From the Earth to the Moon miniseries, which documents the entire U.S. space program, focusing heavily on the lunar missions. He purposely made them very different, and it’s neat to see.

Hanks is a longtime supporter of NASA’s manned space program. He had said in interviews that he had wanted to be an astronaut, but “didn’t have the math.” He’s also a member of the National Space Society, and co-wrote and co-produced an IMAX film called Magnificent Desolation about walking on the moon. (That, by the way, you might remember is the title of Buzz Aldrin’s autobiography, too.)

Other Tom Hanks movies in our collection

These are all movies that we’ve seen, but use your judgment – obviously, some are better for various ages than others.

Ashar has seen and particularly enjoyed Forrest Gump, despite some tough thematic parts, as well as Catch Me If You Can, which she LOVES but which has some pretty serious language issues.

And The Green Mile is still one of Chris’ favorites!

We love watching movies and talking about them. Even “silly” movies like Toy Story raise neat questions, and of course some of the biggies like Forrest Gump raise a lot of questions. Some things that Tom Hanks’ work makes us think of include:

And thanks for stopping by to help me wish Tom Hanks a happy birthday!

4 thoughts on “A birthday celebration: From the toybox to outer space with Tom Hanks”