On June 9, one of Ashar’s recently-discovered “favorite movie stars” will turn 52 years old.

But in Ashar’s eyes, he’ll always be 17 – young Marty McFly from the Back to the Future trilogy, who we know and love as Michael J. Fox.

As part of an iHomeschool Network celebration of some noted June birthdays, I wanted to share today a little more about Michael, and specifically some of what we’ve learned and talked about through his first series of big hits, Back to the Future! 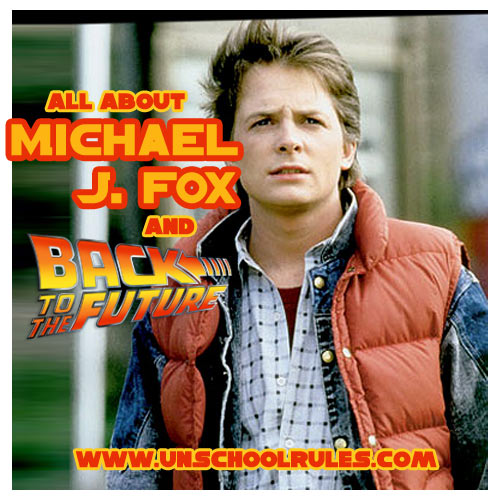 All about Michael J. Fox

Many of the adults among us think of Michael J. Fox best as Alex P. Keaton on Family Ties. The funniest thing is, I was never a big Family Ties fan, so, like Ashar, I most often think of him as time-traveler Marty McFly!

Disclosure: This post has some affiliate links. I only link to things we legitimately use and recommend, so if you see such a link, it's because we really do believe in the book or item!
Michael J. Fox was actually born Michael Andrew Fox, which I think is neat because I can’t imagine ever calling him anything but “Michael J.” Even Michael Fox or Mike Fox sounds funny to me! (As if I’ll ever get a chance to address him in person, so who cares, right?) He did this because he needed a unique name to register with the Screen Actors Guild, and his own was taken, so he picked the J. reportedly as a tribute to actor Michael J. Pollard.

Anyway, he was born June 9, 1961, and holds dual Canadian-American citizenship.

Most of his acting work started in the early 1980s and continued until 2000, when he semi-retired after announcing that he has Parkinson’s disease, which he was diagnosed with in 1991; since then, he’s written three books and started a foundation to help fund and promote awareness of Parkinson’s research, and is about to make a comeback on TV with an NBC sitcom this fall.

All about Back to the Future

That’s Back to the Future, the time-travel series of three movies that I loved when I was younger and rediscovered this year while watching them with Sarah.

Heavy! There’s that word again! Why is everything in the future so heavy? Is there a problem with the earth’s gravitational field?

Yes, these are things we say on a regular basis in our family.

If you’re wondering more about the movies (and the books, and the TV series, and all the other things that I didn’t even know existed until now), you could lose hours in the Futurepedia – the wiki project for Back to the Future that is almost frighteningly thorough.

I had to laugh at one thing I found while reading about the Back to the Future series. Describing his work in the films in a 2012 Parade magazine article, Michael J. Fox said “I truly thought I was terrible.” He was sure the films would never be shown, he thought he did so bad!

I guess we all do a better job than we give ourselves credit for, huh?

As someone who lives with chronic illness, I’ve spent most of my adult life appreciating Michael J. Fox’s honesty and openness about his own struggles.

This interview with Ellen DeGeneres is particularly great:

One thing that Michael’s caught some hard times for is that he doesn’t always “look” like someone with severe Parkinson’s during his television appearances.

Well, actually, I’ve been erring on the side of caution — I think ‘erring’ is actually the right word — in that I’ve been medicating perhaps too much, in the sense [that] … the symptoms … people see in some of these interviews that [I] have been on are actually dyskinesia, which is a reaction to the medication. Because if I were purely symptomatic with Parkinson’s symptoms, a lot of times speaking is difficult. There’s a kind of a cluttering of speech and it’s very difficult to sit still, to sit in one place. You know, the symptoms are different, so I’d rather kind of suffer the symptoms of dyskinesia… this kind of weaving and this kind of continuous thing is much preferable, actually, than pure Parkinson’s symptoms. So that’s what I generally do… I haven’t had any, you know, problems with pure Parkinson’s symptoms in any of these interviews, because I’ll tend to just make sure that I have enough Sinemet in my system and, in some cases, too much. But to me, it’s preferable. It’s not representative of what I’m like in my everyday life. I get a lot of people with Parkinson’s coming up to me saying, “You take too much medication.” I say, Well, you sit across from Larry King and see if you want to tempt it.

I admit that’s a hard issue for me, in large part because it’s one I’ve struggled with personally related to health issues.

I did like hearing that when Michael appeared before the Senate Appropriations Subcommittee in 1999 to talk about research funding, he purposely did not take his medication. I think that’s fair and relevant, and I think I support his decision to potentially “overmedicate” under high-pressure situations as well!

Other Michael J. Fox movies in our collection

Now this is what it’s all about, for our family. We love to learn through books and movies, and we don’t really differentiate between “educational” movies and books and “noneducational” ones.

Some movies, though, really spark a lot of discussion even when they don’t purport to be traditionally educational, and the Back to the Future series is a great example of this. Some of the things it led us to talk about include:

And thanks for stopping by to help me wish Michael J. Fox a happy birthday in thanks for all the smiles and laughs he’s brought our family!

6 thoughts on “A birthday celebration: Learning from Michael J. Fox with Back to the Future”