While we were working to clean up our basement family room a bit earlier this month, Ashar found a no-longer-needed removable shelf from a cheap bookcase, and she had a brainstorm.

“I want to make my own skateboard!”

She has been playing with the board ever since, sliding it across the family room carpet, using it as a miniature see-saw, all sorts of things. We kept telling her that we’d have to figure out some “real” wheels if she wanted it to actually bear up to her weight, and I’d thought we’d scope out some yard sales a little later in the spring.

Well, remember our trip to the Salvation Army half-price sale earlier this week, where we found our pyramid-building kit for a dollar? Well, on the same trip, we found an old pair of roller blades with blue wheels – Ashar’s favorite color – also for the winning price of a buck. I looked them over, decided it would be doable to get the wheels out of the blade assembly, and we brought them home. (Homeschooling on the Cheap friends – may I recommend the Salvation Army store for MANY of your homeschooling projects? We <3 it!!) Today, Ashar comes upstairs with her hands FULL of tons of building materials. “What’s this?” I asked. “We’re going to make my skateboard!” she announced. 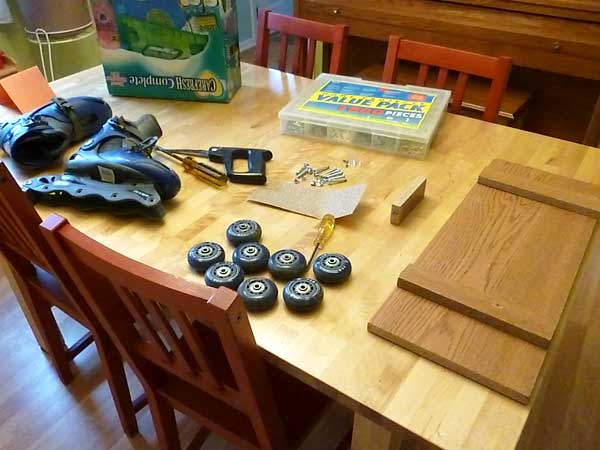 So we set to work. Ashar fetched our biggest screwdriver, and I helped remove the wheels from the roller blades. The other main part I helped with involved the saw – I’m not THAT brave of a mom.

See the board at right? That’s our shelf. The smaller pieces sitting on it were cut from a thin piece the same length as the shelf; it was supposed to be a piece of the frame, to hide the “feet” of the bookcase or something. So Ashar marked the right size, I sawed the thin piece of wood, and she nailed the smaller pieces in place to serve as axles for our wheels. 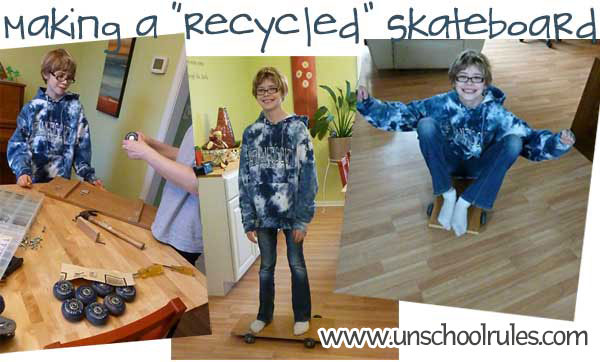 See me at left, above? I’m explaining to Ashar how we can use either nails or screws, and having her test how the wheels spin with each method. We ended up using nails all around, in part because the particleboard wasn’t really “receptive” to a lot of our screwdriver efforts, but also because Ashar liked how the wheels spun on them. She also figured out the nail length – how long would they need to be in order to attach things the way she wanted without coming out the other side

The other two photos prove that we were at least marginally successful – Ashar’s skateboard DID hold her weight. Nails, though, don’t stay real well in crummy particleboard, so the wheels have a tendency to come out pretty easily. We just told her to be careful, and she was. 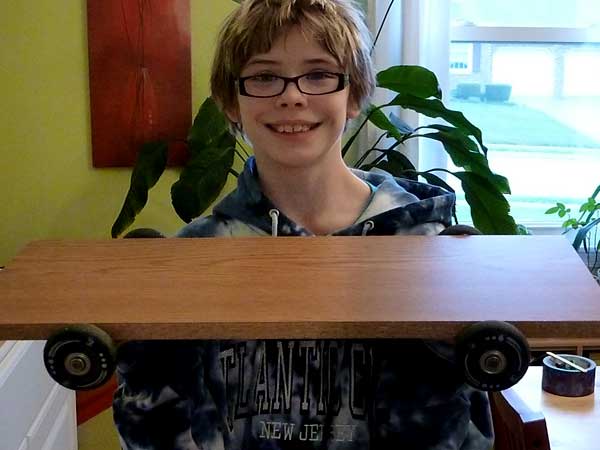 Ashar was pretty proud of her finished product! I was so proud of her for having an idea and working out how to see it through. (And her hammering skills are REALLY improving, and she even knows which kind of screwdriver is which. A few weeks ago, she didn’t know the difference between a nail and a screw!) 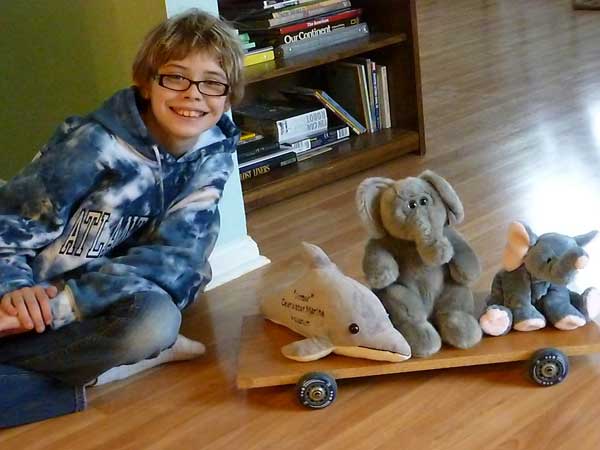 Because of its lack of ability to keep all four wheels together consistently, Ashar decided her skateboard would make a better animal wagon for Winter, Atlantic and Lucy, her stuffed animals acquired this weekend. (THEIR story will make another post, maybe tomorrow; here’s a hint, they accompany Ashar’s new hoodie, seen in today’s photos!)