We should probably get this out of the way: Abraham Lincoln did not slay any vampires. That we know of.

But despite his lack of supernatural enemies, our 16th president did not lack for obstacles to overcome. He served during perhaps the most difficult period in the nation’s history, the Civil War, when half the country was at war with the other half. This towering giant of a man (no, really, he was 6-foot-4 even without the hat!) known as Honest Abe easily merits a spot for his 205th birthday on the iHomeschool Network’s celebration of February birthdays. 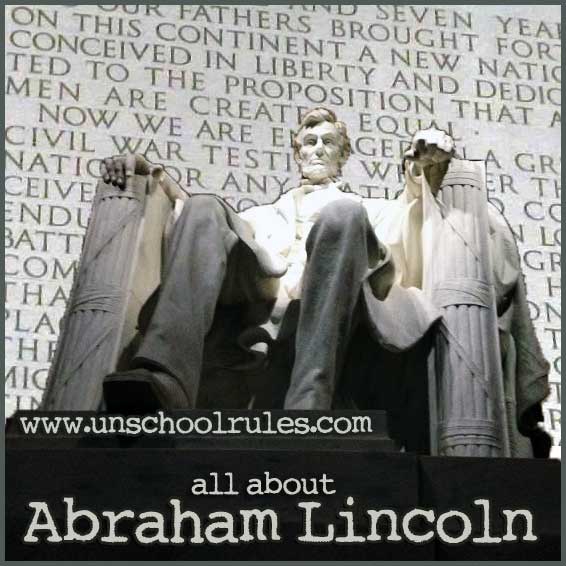 All about Abraham Lincoln

Disclosure: This post has some affiliate links. I only link to things we legitimately use and recommend, so if you see such a link, it's because we really do believe in the book or item!
Abraham Lincoln was born in a one-room log cabin on a farm in Kentucky on Feb. 12, 1809. Though many think he was born in Illinois, Lincoln didn’t call the Bluegrass State home until the age of 7.

Abe’s reputation for honesty began at an early age. One story has him working as a cashier in a grocery store. When he was counting the money at the end of the night, he supposedly realized that he had more money than he was supposed to. Realizing he had overcharged a customer by a few cents, he walked several miles to the man’s home in order to repay the money.

Now, as with most stories that serve as the source for historical nicknames, it’s unknown whether that one is completely true. Regardless, Abe was known for his honesty, especially in his first career as a lawyer. Several sources from the era documented how hard he tried to help his clients, even if it meant less money for him in the long run. Fellow lawyers considered Lincoln to be formidable — in a move right out of Twelve Angry Men, he successfully defended a man against a murder charge with an almanac! When a witness claimed to have seen his client the night the victim was murdered, Abe pulled out the book, which said the phase of the moon meant that little light was showing, and thus the witness could not have seen his client. 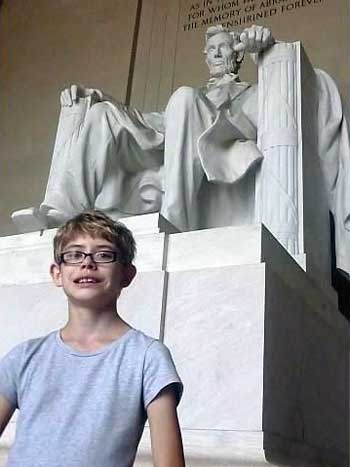 One of Lincoln’s most famous speeches, where he said, “A house divided against itself cannot stand,” actually came during one of his losing campaigns for the Senate in 1858. Despite that setback, Lincoln still won the presidential election in 1860. Southern states, concerned about his strong anti-slavery stance, decided to leave the Union after he was elected in November of 1860 but before he even took office. On March 4, 1861, Lincoln was sworn in as president. Barely a month later, on April 12, the nation was at war.

Lincoln made big decisions during the war, changing commanders several times when they failed to deliver a swift end to the war. In July of 1863, he went to the battlefield in Gettysburg, PA, to consecrate the cemetery built on the place where almost 8,000 Americans (remember, both the North and South were still Americans) lost their lives. He delivered, in 272 words, his famous Gettysburg Address, which begins:

Four score and seven years ago our fathers brought forth on this continent a new nation, conceived in liberty, and dedicated to the proposition that all men are created equal.

The Civil War finally ended in 1865, after Gen. Robert E. Lee officially surrendered on April 9. Lincoln, having been re-elected in 1864, started to work on rebuilding a nation torn apart and torn down by the war. Sadly, on April 14, four years and three days after the first shots were fired and five days after the last guns fell silent, John Wilkes Booth fired one final shot while Lincoln was watching a play at Ford’s Theater in Washington, D.C. Though he received medical attention, Lincoln died from his wounds on the morning of April 15, 1863.

Today, Lincoln stands for many things: Honesty. The courage to stand up for your convictions. The idea that everyone deserves the same rights. He’s considered one of the greatest American presidents, and is honored in many ways all over the country. He not only appears on the penny and the $5 bill, he also has a large memorial in Washington D.C., separated from another great American president (and February birthday-haver!) George Washington only by a reflecting pool.

There have been many, many books, plays and movies made about Lincoln (and not just about his vampire-killing prowess).

As always, Wikipedia has solid background on Abraham Lincoln. Actually, you can get pretty deep for truly famous historical figures like Lincoln, though you should always be on guard for false edits with such high-profile pages.

I Am Abraham Lincoln is a good choice for getting younger kids a basis for learning about Lincoln. It’s part of a series of books written by Brad Meltzer, who wanted a good way to teach his own children about heroes and who to look up to.

Chasing Lincoln’s Killer: Ashar picked out this book about the chase and eventual capture of John Wilkes Booth last year with one of her birthday bookstore giftcards. It’s an excellent middle-grade read based a book for adults by the same author, James L. Swanson. That one is Manhunt: The 12-Day Chase for Lincoln’s Killer, if you have adults or older teens interested in digging deeper!

For teens, a good friend highly recommends Assassination Vacation by Ashar Vowell. The author takes a road trip to various locations where presidents were assassinated, including Ford’s Theater. She packs an amazing amount of historical information in, but manages to stay interesting throughout. You learn, for example, about the strange life of Lincoln’s son, Robert Todd Lincoln. Robert Todd was not only present for the assassination of three presidents (his father, Garfield and McKinley), he also had his life saved by Edwin Booth — the more famous older brother of John Wilkes — in 1863 or 1864.

The Papers of Abraham Lincoln is a long-term project dedicated to identifying, imaging, transcribing, annotating, and publishing all documents written by or to Abraham Lincoln during his entire lifetime (1809-1865). (And they need volunteers). Read more about the project at Wikipedia.

The Abraham Lincoln website has a wealth of info about the president himself as well as the memorial on the National Mall. Check out their interactive version of the memorial without even leaving your living room.

The Lincoln Archives are an essential resource for primary documents for Lincoln’s administration. Similar to the Papers of Abraham Lincoln, the Lincoln Archives aim to have all the governmental records produced during Lincoln’s administration digitized and available via the Internet. These kinds of papers are essential for deep learning about history, as they provide the actual words and thoughts from the period.

And thanks for stopping by to help me wish Abraham Lincoln a happy birthday!

One thought on “A birthday celebration: Learning about Abraham Lincoln”