Get to the choppa!

Come with me if you want to live!

These are quotes we hear almost daily in our house, because Ashar is an absolute devotee of bodybuilder-turned-actor-turned-governor-turned-activist Arnold Schwarzenegger, and that’s why we’re talking about Ah-nold as part of the iHomeschool Network’s celebration of July birthdays. 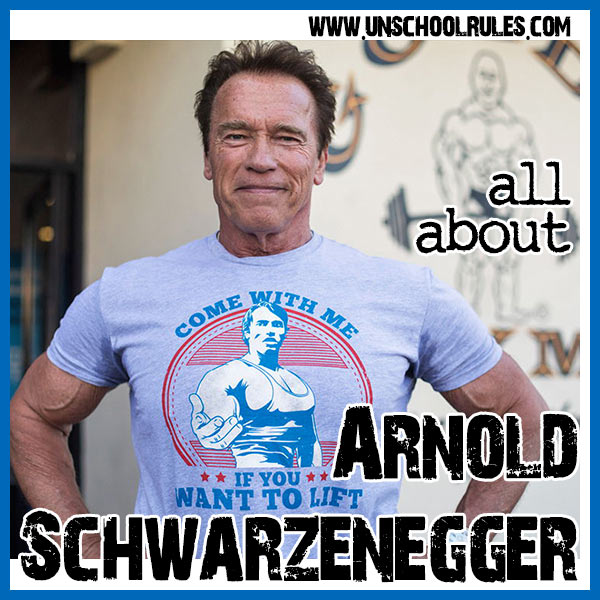 All about Arnold Schwarzenegger

He served mandatory military service in Austria after he finished school, following in the footsteps of his father, who was a local chief of police and who had served in World War II. In the Austrian army, Schwarzenegger drove a tank, and in fact he today owns the exact model of the tank he drove in the Army.

Disclosure: This post has some affiliate links. I only link to things we legitimately use and recommend, so if you see such a link, it's because we really do believe in the book or item!
Most interestingly in his early life, Arnold first played soccer and then started weight-training in his early teens, which would later lead to a career in bodybuilding that would net him 7 Mr. Olympia titles and 4 Mr. Universe titles. It was bodybuilding that allowed Schwarzenegger to fulfill his dream of coming to America. “The Mr. Universe title was my ticket to America – the land of opportunity, where I could become a star and get rich,” he is quoted as saying.

Schwarzenegger did move to America in 1968, when he was 21, despite speaking little English at the time. He started training at Gold’s Gym, the chain where he still trains today. Eventually, in 1983, he became a naturalized American citizen.

While training and competing, Arnold had a goal to move into acting. His first movie, Hercules in New York, was pretty much a bomb, and his lines had to be dubbed later because his accent was so thick. He was credited as Arnold Strong because no one thought “Schwarzenegger” was a pronouncable name in America. “It was very difficult for me in the beginning – I was told by agents and casting people that my body was ‘too weird’, that I had a funny accent, and that my name was too long. You name it, and they told me I had to change it. Basically, everywhere I turned, I was told that I had no chance,” he said.

Obviously, Arnold proved those people wrong. He got his big break starring in Conan The Barbarian in 1982, and in 1984 began what would be a 30-year run as a cyborg from the future, from 1984’s The Terminator to 2015’s Terminator: Genesys, made after he came out of retirement from acting.

Interestingly, Schwarzenegger was a millionaire even before his movie career took off, thanks to several entrepreneurial ventures like a brick-laying company, a mail-order bodybuilding equipment business and other projects.

In 2003, after working in politics in positions such as chairman of the President’s Council on Physical Fitness and Sports under President George H.W. Bush, Schwarzenegger announced that he was running for governor of California as a Republican, and was re-elected in 2006. Many people have even asked him about whether he’d ever consider pursuing the presidency, a role he cannot currently hold as a non-U.S.-born citizen.

Personally, Schwarzenegger is known for marrying Maria Shriver, the niece of John F. Kennedy and daughter of Eunice Kennedy Shriver, in 1986, then later separating from her in 2011 after news of his having an affair and a child outside their marriage became known. Schwarzenegger and Shriver have four children together, in addition to his other son.

Since leaving the governorship, Arnold has been busy with activism in a variety of environmental and health causes. He’s sold Come With Me If You Want to Lift T-shirts and other items to support the After School All Stars program, he’s volunteered extensively with the Special Olympics, and he’s continued a trend of environmentalism that he began during his terms as governor.

In addition to all his other awards, Arnold has a star on the Hollywood Walk of Fame and is in the WWE Hall of Fame. 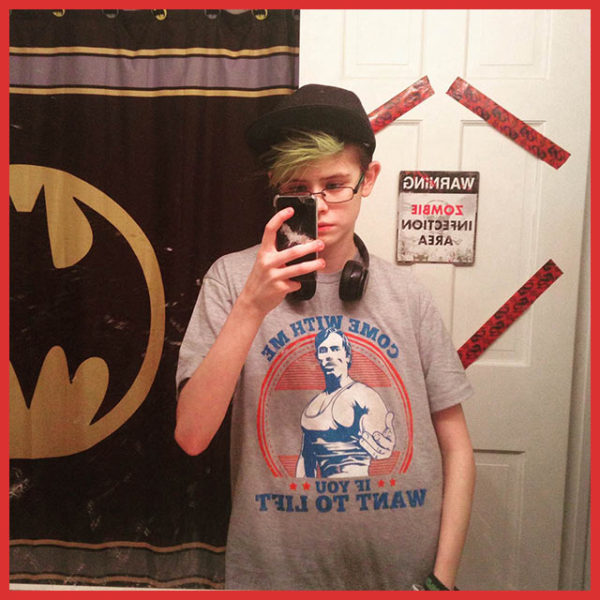 Ashar is modeling her “Come With Me If You Want To Lift” Arnold Schwarzenegger T-shirt. Arnold is pretty much single-handedly responsible for Ashar starting a daily exercise routine in the past year.

Arnold and our family

As we worked together on this post, Ashar wanted me to particularly note that it is Arnold’s influence that has motivated her to start her own workout program.

She was already doing dumbbell weight lifting, situps and pushups on her own, and a couple of months ago we all joined the gym together to build on that.

As we talk about Arnold Schwarzenegger’s movies, it’s probably a good time for me to remind new readers that our daughter, Ashar, is in her later teen years, and we’re very open about watching movies together and talking about them as a family. These are not recommendations for all ages, nor are the ones for older teens even something I’d suggest sending your 17-year-old off to watch alone. But there are also some fun picks for everyone!

And thanks for stopping by to help us celebrate Arnold Schwarzenegger!

2 thoughts on “Come with me if you want to learn about Arnold Schwarzenegger!”