It’s the brogue that gets you.

Whether he’s looking dapper swilling his martini glass in a three-piece suit or resplendently regal in his royal robes, it’s Sir Sean Connery’s voice that draws you in to whatever movie you might see him in. And even though he hasn’t made many movies in the last decade, his celebrated heyday — including a seven-film, 21-year run as 007 himself, James Bond — produced more than enough films to ensure we see him regularly popping upon our television screen.

That, and the fact that he’s one of only two Bonds whose birthday we haven’t written about, made it an easy choice to celebrate his 86th birthday on the iHomeschool Network’s celebration of August birthdays. 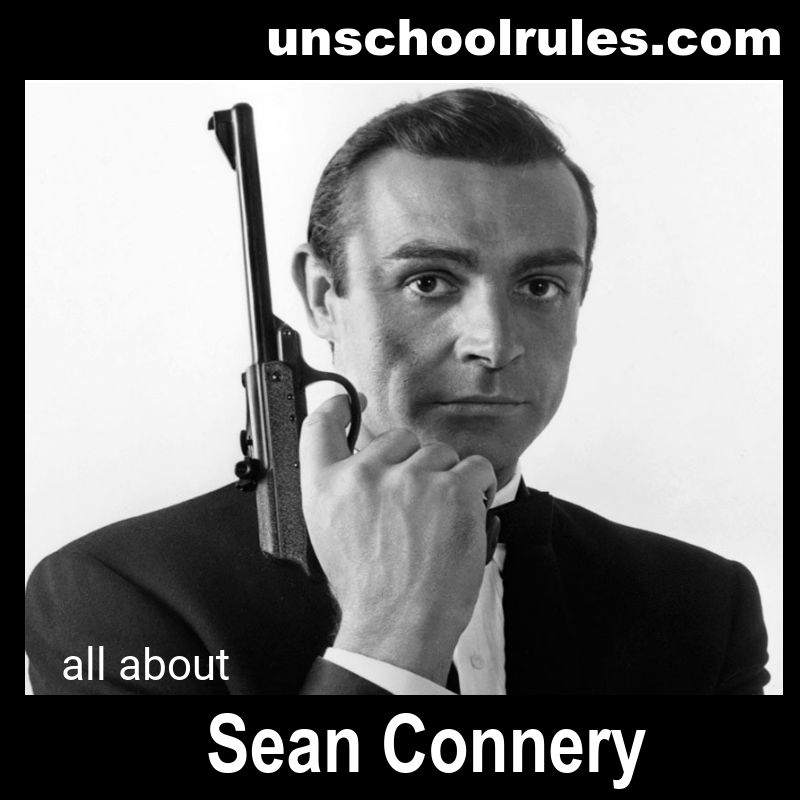 All about Sean Connery

Sir Thomas Sean Connery was born Aug. 25, 1930, in Edinburgh, Scotland, to a cleaning woman and a factory driver/truck worker. He claims he’s been known as “Sean” throughout most of his life, though when he was younger he was usually referred to as “Tommy.”

Disclosure: This post has some affiliate links. I only link to things we legitimately use and recommend, so if you see such a link, it's because we really do believe in the book or item!
Throughout his life, he’s spent time as a milkman, a truck driver, a lifeguard, an artist’s model, a coffin polisher and joined the Royal Navy, where he got two tattoos: One that says “Mum and Dad,” and the other a “Scotland Forever.”

Similar to our last birthday boy, Arnold Schwarzenegger, Connery started bodybuilding at age 18. He placed third in the 1950 Mr. Universe contests, according to his official website (which appears to have been last updated roughly around the same time), though most official sources have him in the 1953 version of the competition, where he placed either third in the junior class or failed to place in the Tall Man classification.

It was around this time, in 1951, that Connery started helping out backstage at a local theater to make some money, which piqued his interest. During a London bodybuilding competition in 1953, one of competitors offhandedly mentioned that auditions were taking place for the musical South Pacific, and Connery managed to earn a spot in the chorus. By the time the production had reached Edinburgh, he had been promoted to a featured player, and the next year found himself as the male lead.

For the next several years, Connery bounced around various roles in TV shows, theater plays and even a babysitter. He managed a few leading roles in television movies and even a Disney film, Darby O’Gill and the Little People, as he made his way into the 1960s.

In 1962, he got his big hit. Though reluctant to commit to a series of films, he signed on as James Bond for five films, from Dr. No  to You Only Live Twice, between 1962-67. He then reprised the role for 1971’s Diamond’s Are Forever, and 1983’s Never Say Never Again. James Bond creator Ian Fleming originally had his doubts about Connery, thinking him unrefined and too muscular, but changed his mind after Dr. No’s success. He was so impressed, in fact, that in later novels Fleming even created a half-Scottish, half-Swiss heritage for Bond.

Connery had a few worries as Bond. In one sequence for Thunderball, Connery had a scene with sharks. Wary, he had requested a Plexiglas partition be built in the pool; it was, but one shark still managed to get through and Connery bailed out. He also had to wear a wig for every Bond movie as he started going bald at age 21.

Connery starred in other films while he was Bond, including Alfred Hitchcock’s Marnie and the much-acclaimed Murder on the Orient Express. He started to get tired of the role of James Bond, feeling he was being typecast and a better actor than “just” James Bond. After his career as Bond, Connery went on to make many popular movies, including Highlander and an Academy Award nomination for Best Supporting Actor for The Untouchables. Even in the late 80s/early 90s, when he was 60 years old, his fame grew with Indiana Jones and the Last Crusade and The Hunt for Red October. He retired from acting in 2006.

In case you missed them, we’ve already written posts celebrating Daniel Craig and Timothy Dalton, both of whom have March birthdays, and Roger Moore, who has an October birthday! Poor Pierce Brosnan came up in an already-busy May, but we promise we’ll get to him next year.

And thanks for stopping by to help me wish Sean Connery a happy birthday!