Today was excellent. No better way to describe it.

I slept in, and Chris decided to do a “special project” with Sarah! They decided to go into our basement book room to look for old school books. (We run an online used bookstore, so when I say book room, I kind of mean a combination between a bookstore and a library. A really OLD library.)

They were originally looking for old math books, which we have a bunch of, and they were going to see if they could find any with word problems in them. 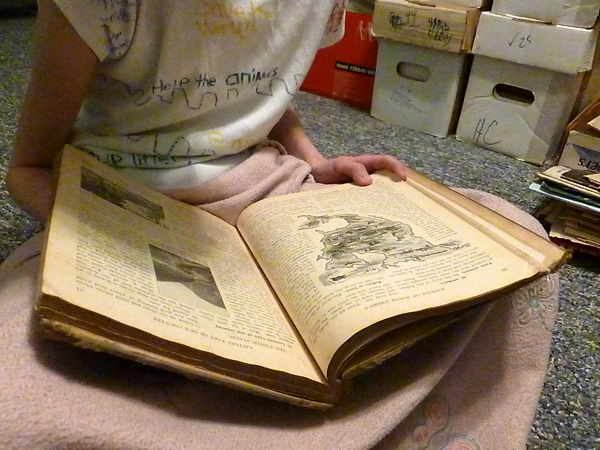 But early on, Ashar found an old geography textbook – from 1920 – that she absolutely fell in love with, and Chris decided to run with that too. She sat down and was reading through pages of it that talked about everything from the mechanization of farms to the human intrusion on the territory of brown and black bears. By midday, that became this guest post dictated by Ashar for Chris’s book and ephemera blog, Papergreat.

Chris said the blog idea worked well because Ashar didn’t have to type it herself, and also because she also likes writing blogs and doing research – the first thing she wanted to do when they came upstairs was to look up the book online and see what she could find out about it.

I wasn’t sure what had prompted all this (I came in at about the point they started working on the blog), so I asked Chris about it tonight as I was starting to write, and he said, “She had really been going off on quite an interesting lecture about the Amish and what has and hasn’t changed on the farm in terms of mechanizations, because the geography book really focuses on how horses and mules are vital for the American farmer, but that things were starting to change. So she really was saying some smart stuff, so I wanted to get upstairs and do it in the form of a blog as quickly as possible, because it was a really a case of her not just repeating what’s in the book, or saying something fairly obvious, but really saying some more insightful stuff.”

The Amish parallel, by the way, she came up with entirely on her own, which fascinated me!

I LOVED hearing Ashar dictate her blog post to Chris, and I loved hearing Chris work through her ideas with her. He’s pretty serious about his blog, and having Ashar guest post was truly an honor. (He’s never had ANY guest author before!) I would really encourage you to check out what they came up with here. It’s pretty stellar. (Mom likes to brag.)

The other neat thing about the post was how Chris and Ashar worked together on the art for it. They scanned their book page, and they worked together using Pixlr (which, by the way, I highly recommend if you can’t afford Photoshop) to create different crops. When they got to a cropped version of the map you can see in the photo above, Ashar showed Chris how to use the eyedropper and paintbrush tools to first match the background color of the page and then mask out the text, giving an image of JUST the map with no fragments of text around it. Then they worked together to decide where to put the images in the post and everything.

The other cool thing, Chris mentioned, was that while they were still in the book room (or the “ephemera hideout,” as Ashar called it), Ashar must have also gone through 10 math books, looking through them and seeing what year they from, what people had written in them, seeing the illustrations, that type of thing.

He said she must have said a bunch of times, “Oh, I know how to do this,” “I remember doing this in class,” or “I can do this.” Chris said they must have looked through those for at least a half-hour, and they made a pile of the ones that were really interesting for future enjoyment. I think that’s pretty awesome – and it’s so great to see Ashar enjoying the history of books the way the rest of the family does!

Other exciting events today: After Ashar’s shower, our friend Tracey helped her create a temporary mohawk out of her wet hair. Ashar LOVED it. I’m somewhat given to extreme hair myself, but I have to admit I cringed just a little when Ashar said, “I want it like this ALL the time!” We’ll see. I wouldn’t say no, but my concern is honestly that she wouldn’t want to put the work into it and then it’d turn into a fight. Either way, she got a real kick out of doing it tonight! 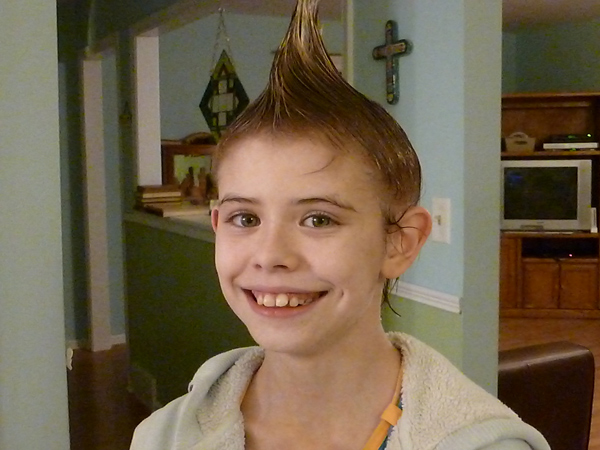 And, finally, this weekend marks not only Ashar’s birthday (and my mom’s birthday, on Sunday), but also Ashar’s great-grandfather’s 70th birthday on Monday. Her grandparents and other family members are celebrating with him out of town, but Ashar isn’t going to be able to go because of her own birthday celebration. So, she decorated a giant card for Great-Pappy instead. She did some really neat work – and for Ashar, this is a LOT of writing, so that was pretty cool! 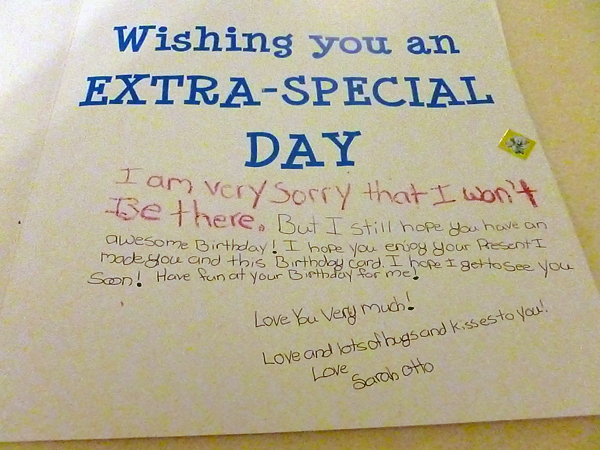 Hope your day was as fun as ours. Tomorrow, we’ll have family visiting from out of town, and I’ll be interested to hear how Ashar describes her homeschooling adventures to them!