Disclosure: In exchange for the honest review of our experience which appears in this post, our family received a copy of the Quest for Arete Starter Set for free. We were compensated for our time completing the review, but all fun had was ours!

Our family has been obsessed with chemistry and its origins in alchemy for several years. In fact, way back in early 2014, I put together a huge resource guide for studying chemistry, focused on a lot of the ways our family loves to learn – apps, games and real-world experiences.

Given that, you can guess how cool Ashar thought it was when we recently got the chance to review a new game, Quest For Arete, that’s based on some neat chemistry facts, overlaid with the magic of alchemy! 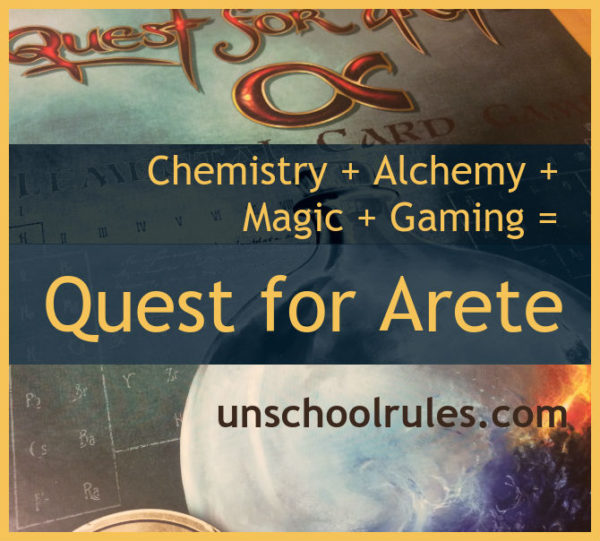 The Magic of Quest for Arete

Arete (pronounced Are-a-tay) means excellence, and in this collectible card game for players 12 and older, you build that excellence by playing as a sorcerer’s apprentice trying to master the elements to make offensive and defensive spells.

Along the way, you’ll get familiar with the names of the elements and their discoverers, as well as the concept of valence electrons (which matter when talking about what elements can bond with one another). And you’ll get to explore some super-fun spell names, catch some science inside jokes, and see some beautiful artwork, too!

By using your elements to make spells, you score points – it’s that simple. This game has a variety of gameplay methods; our favorite was the simplest, Arete Rummy, which is a great way to get familiar with spell-casting. Later, you can customize your deck and start dueling with offensive and defensive spells (think Magic: The Gathering and similar).

Since we’re big into cooperative game-play in our house, the Rummy version was perfect because we could work together to get the highest spell scores possible! In either the Rummy or Dueling games, you can get the whole family involved if older siblings or parents help out younger kids. 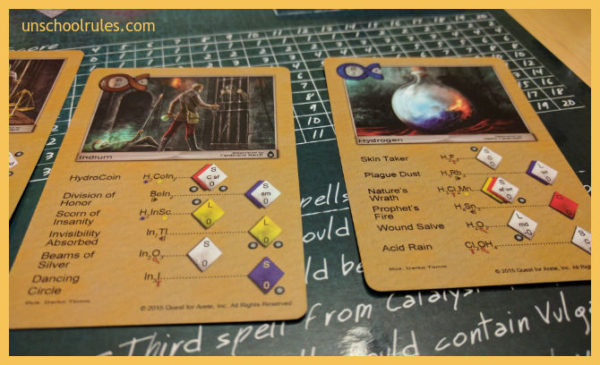 Chemistry vs. Alchemy vs. Magic

Quest for Arete’s tagline is “In the real world, this is the magic.” While there are many awesome ways to get familiar with the elements through gameplay, there are some differences between real-life chemistry and the world of Arete. For instance, to help gameplay proceed more fairly, you can substitute similar elements, such as beryllium for strontium, in the game. Please do not try this with your chemistry set.

Similarly, not all of the element combinations given make “real” compounds. The ones that do, though, are a ton of fun if you’re into geeky inside jokes.

Wound Salve, which is H2O2. You might know this as… hydrogen peroxide, a great wound salve if ever there was one!

Another favorite of mine was Well Killer, aka BeF2, beryllium difluoride, a clear liquid that’s toxic if swallowed. If you’re into chemistry, you’ll have fun trying to pick out the real ones and learn more about them, and in fact, that’s the biggest rabbit-trail we went down as we played Quest for Arete for the first time! (We also had a good time exploring Roman numerals, which are a key part of the scoring system!) 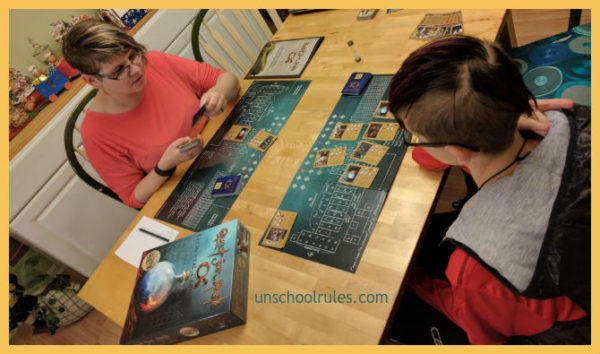 Ashar’s advice to anyone who wants to enjoy Quest for Arete to its fullest? “Get all the expansion packs!” She was sold on an awesome spell called Drunken Cat, but that required an element our pack didn’t have. (Don’t worry, she was perfectly content to make Yellow Fever instead, bless her murderous little heart.)

2 thoughts on “Chemistry plus alchemy plus magic plus gaming: Tons of homeschool fun”