Regular readers and friends will know right away that when it comes to heroes, Ashar thinks they don’t come any better than James Bond.

So when it came time to join the iHomeschool Network’s celebration of March birthdays, when Ashar spotted not one but two Bond actors, she said we absolutely had to honor both Daniel Craig and Timothy Dalton, born March 2 and March 21 respectively, in a post! 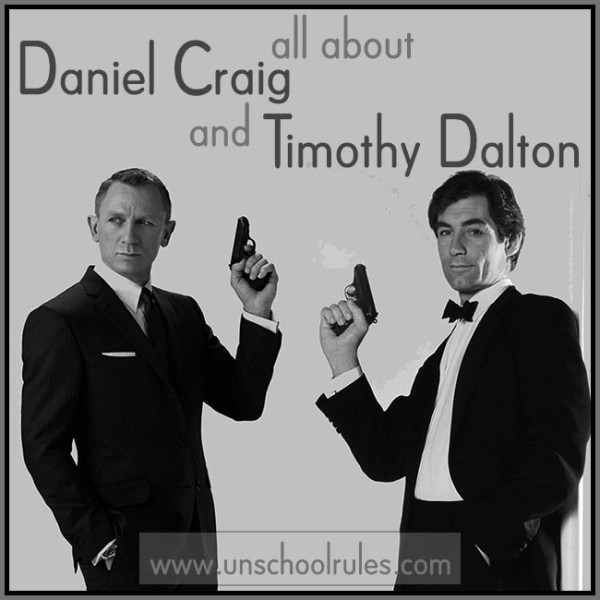 All about Daniel Craig

Daniel Craig was born March 2, 1968, in Cheshire, England. He started acting at age 6, and by the time he was 16, he’d left school after being accepted into the National Youth Theater.

In addition to his well-known role as James Bond in four movies so far, Daniel Craig also had roles in Lara Croft: Tomb Raider, The Golden Compass, Road to Perdition, The Girl with the Dragon Tattoo, and Cowboys and Aliens, to name a few! He’s also done several historical movies; keep reading for a review of one of our favorites later in this post!

Disclosure: This post has some affiliate links. I only link to things we legitimately use and recommend, so if you see such a link, it's because we really do believe in the book or item!
Daniel Craig is married to actress Rachel Weisz. He has a teenage daughter from a previous marriage, and Weisz has a young son.

Interestingly, Daniel Craig is the first actor to portray Bond who was born both after the film franchise started and after the death of writer Ian Fleming. And when he was first signed to be Bond, people asked him if he wanted to die his hair, because the idea of a “blonde Bond” was so unpopular!

A final fun fact: In a way that’s kind of, I don’t know, anti-Bond, the United Nations appointed Daniel Craig the first global advocate for the elimination of mines and explosive hazards, a role to which he was named in April 2015. (Ashar points out that maybe this is VERY Bond, as the poor character comes close to getting blown up startlingly often.)

Ashar’s side fact: Daniel Craig’s favorite soccer team is Liverpool F.C. in the Premier League. Ashar’s is Manchester United, but she loves her favorite Bond anyway.

All about Timothy Dalton

Timothy Dalton was born March 21 in Wales, but the year is a matter of some debate – either 1944 or 1946. (I feel like we should be able to get that pinned down, right?) He decided he wanted to be an actor when he saw a production of Macbeth when he was 16 and, like Daniel Craig, actually left school to tour with the National Youth Theater.

Much of his early work was on stage; Dalton is a classically trained Shakespearean actor. He was originally approached to play Bond in 1968, for the movie On Her Majesty’s Secret Service (the role that went to George Lazenby), but he turned it down, saying he was too young, and following that up in later interviews by saying he really didn’t want to take over from Sean Connery. He also turned down the role around 1980, but in 1986, after Roger Moore retired, and since Pierce Brosnan was still under contract to shoot the TV show Remington Steele, Dalton finally saw himself as Bond, first in The Living Daylights and later in Licence to Kill. He was originally supposed to make a third, but legal problems with the studio cancelled it, and by the time GoldenEye came out, he was no longer interested and the role then went to Brosnan.

Dalton is said to have been the actor to play Bond the most seriously. He took the role seriously, too, doing most of his own stunts.

More recently, Dalton was the voice of Mr. Pricklepants in Toy Story 3, and stars in a Showtime series called Penny Dreadful. He had also appeared on several episodes of Chuck, and in the movie Hot Fuzz. He has one son, Alexander.

You should definitely check out Defiance, a World War II movie based on a true story about the Bielski Brothers, which also stars Daniel Craig. Ashar absolutely fell in love with this movie and with the Bielskis’ story.

And thanks for stopping by to help me wish Daniel Craig and Timothy Dalton a happy birthday!