Earlier this month, I shared our “un-curriculum” for the coming year as part of the iHomeschool Network’s Not Back to School Blog Hop. This week, it’s Day-In-The-Life Week, where we’re supposed to show what a typical day looks like in our family’s particular style – in my case, a day in the life of unschoolers.

I don’t think we have a typical. Or a style. Unless haphazard and wonderful is a typical style. In that case, yes, yes we do, and you’re welcome to take a peek.

Our days vary a lot based on the work schedules of the various adults. Kaitlyn, Chris and I all work full-time about an hour away from home, with Kaitlyn and I heading in one direction (north) and Chris heading in another (east). Chris also works primarily evening shifts, getting home from work around 12:30 or 1 a.m.

But one to two days a week, Kaitlyn and I can work from home, and Chris often gets midweek days as his only off time. Add into that our commitments with 4-H, Ashar’s various theater groups, my grad school program, my martial arts lessons and more, and it can get pretty complex.

So while I want to show you one cool day in Ashar’s life, please know that they can all look very different – and that’s what we love!

A day in the life of unschoolers, as documented by Chris, Unschooling Dad Extraordinaire

When I told Chris I was working on this post before he and Ashar spent a day together last Wednesday, I was hoping he’d take a couple photos and make some notes. Instead, because he is a great blogger himself, in addition to being Amazing Unschool Dad, he wrote the most detailed look at a day ever.

Up around 10 a.m.
Dressed and ready to roll.
Gets his laundry.
Explains the story of “It” to his grandmother.

He and I drive to the Galleria (Note from Joan: This is the mall across town from us). Discussion includes:

Talk about Hurricane Maria and Puerto Rico. He wants to know where it’s going and where the other hurricanes are.

Unprompted, he asks: “When were women first allowed in the military?” So I do my best to fill him in off the top of my head, starting, correctly, with the women who served as military nurses in World War II, moving through World War II, Korea and Vietnam and then correctly tell him that the first woman who fought in combat missions were during the Gulf War. He wonders why it took so long, especially if women can do everything men do.

Then he switches gears to: “Do women have equal pay yet?” I tell him no, and that it’s wrong that they don’t, and progress is unfortunately slow, but that speed is the reality, given all the years of institutional tradition in play. He think we should get to equal pay faster, but understands the obstacles that make it slow going. He understands that a lot of people – most people – want equal pay, but that doesn’t mean you can snap your fingers and make it happen.

Then, as we’re discussing the slow politics behind equal pay, he asks: “Would we be better off if the president wasn’t sexist and racist?” “Yes, yes we would,” I reply. (Note from Joan: Ashar is REALLY into politics – and has very strong political opinions and very little filter. You don’t have to agree – and I don’t normally share any of our politics, which vary in our household – but this was TOO “classic Ash” to pass up.)

“We need people in Congress, too, who are good people and aren’t sexist and racist,” Ashar adds.

So that conversation happened. I wish I had taped it. But I was driving. 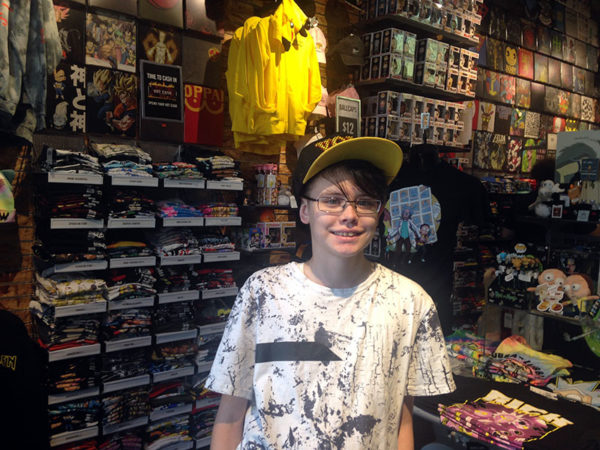 Then we went to Hot Topic, one of his favorite stores. He likes The Walking Dead and heavy metal and Deadpool and he was hoping to find a Funko pop figure of Dustin from Stranger Things, but they had everyone but him.

Then we went to FYE and browsed more pop-culture stuff.

Then he ate McDonald’s for lunch and grilled me about Pennywise. 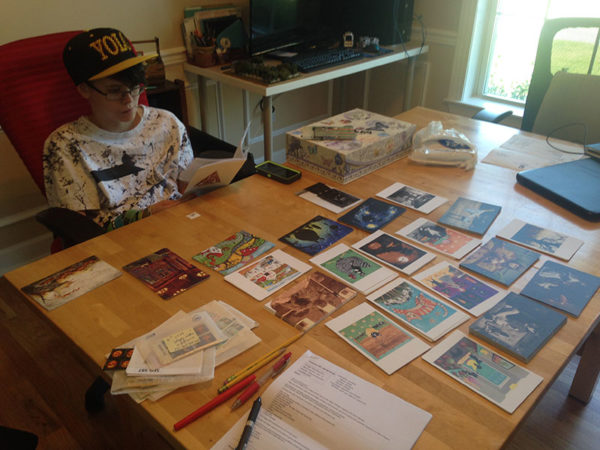 Ashar’s stamp book – and some of Chris’ many postcards to send to Postcrossing friends.

After we came home and a short break, we added some stamps to his Stamp Book, including James McNeill Whistler, Booker T. Washington and a stamp from the 1932 Los Angeles Olympics. (Note from Joan: The Stamp Book is a cool project Ashar and Chris are working on with his stamp collection!)

Then he picked out a postcard to send to his pen pal Christina in Taiwan. And he specially picked all the stamps to put on the card.

Ashar wrote the note to Christina, mostly telling her about his burgeoning community theater career. I addressed the card. 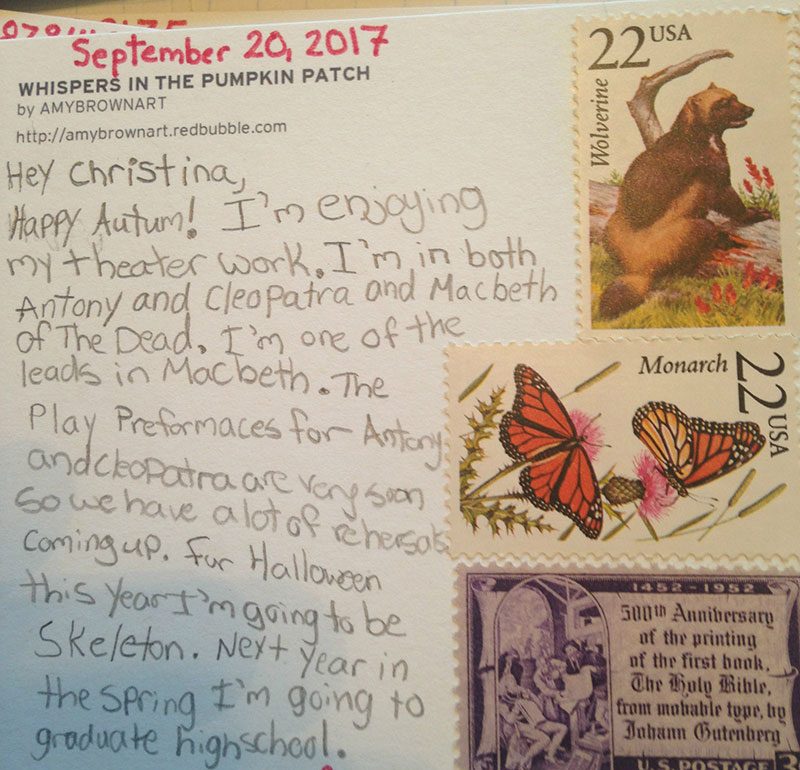 Ashar loves writing to his pen pal, Christina, in Taiwan! You can tell because it’s his neat handwriting.

Then we had to take a break to help Coby, who had been outside too long and was very overheated. (Note from Joan: Coby is our almost-14-year-old Goldendoodle, who is not in very good health.)

Then Ashar helped me pick postcards for about a dozen of my new Postcrossing recipients around the world. I read Ashar each recipient’s profile and likes and dislikes. Based on that, Ashar then chose which card to send them.

Then Ashar discovered that Norman Reedus has his very own custom postcard set, of his own photographs, for sale.

Ashar didn’t understand Reedus’ signature, but I showed him how it’s a fancy N and R.

Then I showed her how she should could sign his own initials in the style in the style of Norman Reedus, so he tried a couple.

Turning our attention to the model cemetery that we have, we started a list of other items that we might want to build or acquire if we construct a small model railroad set and landscape that includes the cemetery. The things we came up with, so far, are train tracks, tunnels, a small town (which we will call Derry), a clown for the cemetery, a prison, a road, cars, a farm and a mountaintop. (Note from Joan: HARD NO ON CLOWNS. Nice try, Ottos. I’m terrified of clowns and you know it.)

(Another note from Joan: The week before, I received a text that says “We bought a graveyard!” I came to find that they’d visited the local antique mall and purchased a wonderful model cemetery. This has been SUCH a cool find, by the way, that it will soon be the subject of its own post!)

Then Ashar took a break to wind down before his theater rehearsal by playing Grand Theft Auto on the PS4.

Then he ate salmon and french fries for dinner.

Went to rehearsal (Note from Joan: This is for Anthony and Cleopatra, which premieres this weekend!)

Watched Stranger Things episode. (Note from Joan: This is something Chris, Kaitlyn, Ashar and I are doing together; Chris and Ashar already saw all of Season 1, but Kaitlyn and I are trying to catch up before Season 2.)

Spent 45 minutes in the upstairs bathroom laughing at videos on his phone.

Went to bedroom. Laughed a little while longer.

And, Chris concludes, “After that I don’t know because I fell asleep.”

Other things that make up our unschooling days

I don’t have too much more to add to Chris’ summary of a perfectly awesome day in our lives. When Chris and Kaitlyn and I are at work, Ashar and his Mommom (my mom) are home together and enjoy TV shows or movies or kitchen projects together. Interspersed with that, Ashar will sometimes take walks around our neighborhood, play basketball outside, hang out with our pets, work on Instagram photo edits for his fan account or read a book.

Then there was a recent Saturday when Kaitlyn and I took Ashar shopping at the big mall in the next town over to use some giftcards he had. On the drive, we happened to see a hot air balloon, so we followed it to see if we could see where it was landing, and ended up getting some cool pictures through our car’s sunroof. We talked all about how hot air balloons work and where you might go in one, then we finished it up with a restaurant dinner where we talked about how calories work for weight loss and weight gain.

Our teachers are all the people we meet, day in and day out. The woman at the doctor’s office who explains why you can’t have a fresh tattoo and get an MRI. Ashar’s Nana, who is an occupational therapy assistant and explains to her various stretches that help with muscle pain. Someone at the library who asks him about the kinds of books he enjoys and recommends others.

That’s what unschooling looks like for us. It’s funny in a way to write this post – we rarely look at the individual days. We don’t need or choose to “do math” or “do school” for a particular amount of time, nor do we “have to” accomplish much in particular in a learning sense, and sometimes, weeks go by where we’re all so caught up in our personal interests that we don’t have time for much else.

But over time, as the days build into weeks and months and years, we grow. It’s like watching a tree grow – maybe you don’t see the change each day. But when you step back, suddenly you think: This is so much bigger than it used to be.

That’s how we feel about our life. Our free approach, rather than limiting what we learn, has made it so, so much bigger.

And we love it. 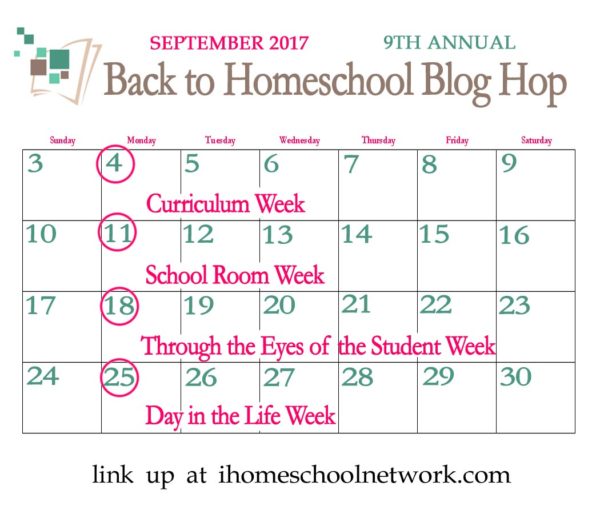 Want to see the typical or not-so-typical days of my fellow iHomeschool Network bloggers?

Check out the rest of Day-In-The-Life Week at the Not-Back-To-School Blog Hop here (and you can link up your posts, too!)