Welcome to our Sentient Beings Project, a family writing project based on one question: “What if your stuff came to life?”

How our family writing project began

It all started with a song – specifically “I Am Not Your Broom” by They Might Be Giants. Ashar and I have loved that song for years, and it came on while we were driving around town on some errands. We started talking about what would happen if our own “stuff” would somehow come to life. This led us into the idea of sentience, and what it means to be alive.

This led into all sorts of questions about the implications of that, including sentient rights, and Ashar decided if we had a sentient broom, his name would be Issac. She started talking to me about what brooms might do in their free time, what jobs they might like (if “brooming” wasn’t for them), whether they’d wear clothes, what rights they’d have, their life span, and a bunch more. 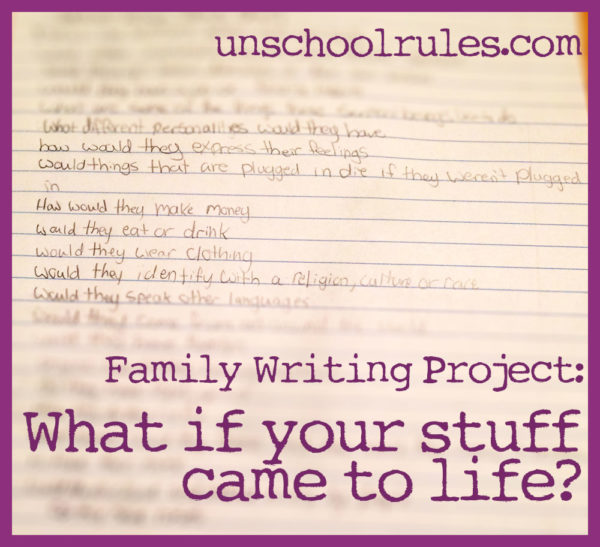 When we got home, she grabbed a notebook and started a list, titled…

Disclosure: This post has some affiliate links. I only link to things we legitimately use and recommend, so if you see such a link, it's because we really do believe in the book or item!
I should make it clear: SHE came up with all of these. I was listening and talking with her about some of the ideas, but all this brainstorming was totally Sarah.

But then, she got stuck. She had all these ideas, and she just didn’t know where to start. She decided that she wanted to draw Issac, so she watched a “How to Draw a Broom” tutorial and brought him to life. But she didn’t know what to write, so I suggested that instead of trying to tackle ALL the questions about Issac, maybe she could write an anecdote (and this gave me a chance to explain what an anecdote is) to go with his picture.

Then she decided that was how she wanted to tell their stories – a picture, then something about whatever sentient being was pictured, then another picture, and something about that being, and so on. She did the first two – drawing, coloring and writing – and then she invited me to draw my own sentient being. After that, my mom was next to participate, then Kaitlyn, and then Chris. All in all, we worked on these for the better part of a month!

(Oh, and did you know what makes a drawing sentient? It’s googly eyes.)

I hope you’ll enjoy seeing our drawings and reading our stories. And I hope you’ll consider some of our questions above as prompts for your own family writing project about sentient beings!

Story and art by Ashar Otto 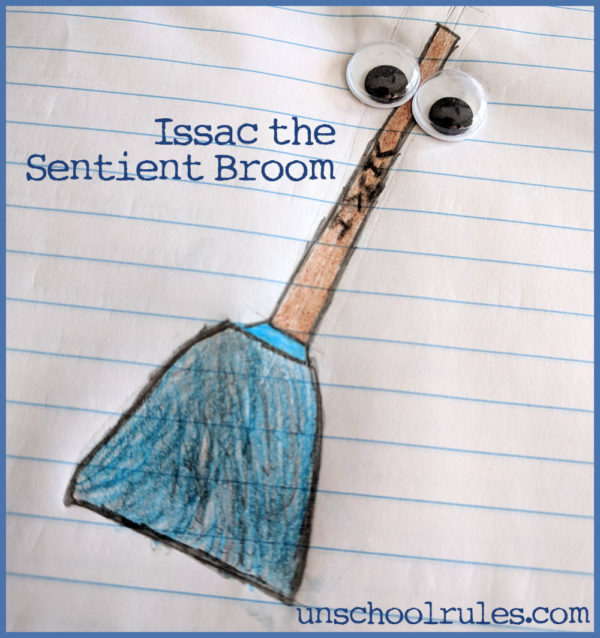 Issac was so happy that he got a name. It made him feel special and loved, and like part of the family – that these people who he calls his family care about him and want Issac to feel like he is one of them.

Story and art by Ashar Otto 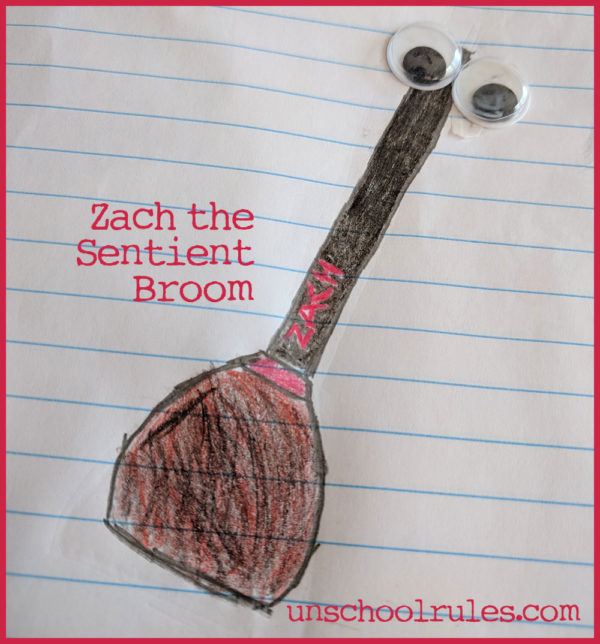 Zach was so happy when he chose that perfect guitar that he could rock out on as loud as he wanted. Zach loved metal and rock music but his favorite was AC-DC, KISS, Rob Zombie and so many others. Zach took guitar lessons and taught himself to play a couple songs. Zach’s favorite color is red but he likes black a lot as well.

Story and art by Joan S. Concilio (that’s me) 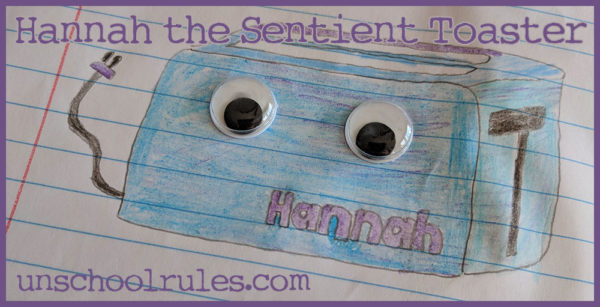 Hannah loved helping her friends, whether they were other sentient beings or people. She was most proud of the day she was able to use her toast slots – which she kept very clean – to hold Christmas cards for her family. When she popped them up, everyone was so surprised and happy, and she felt so loved.

Story and art by Joan H. Concilio (that’s my mom) 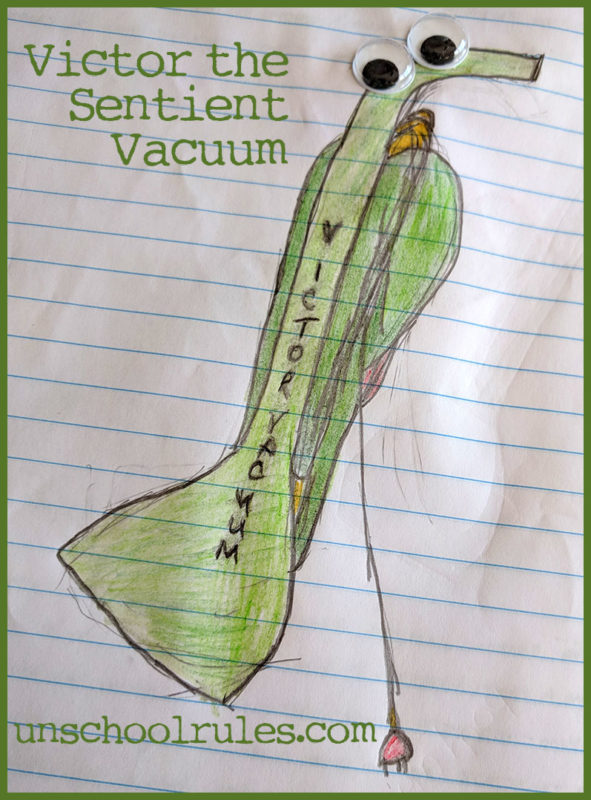 I’m Victor Vacuum and I help keep the house clean. I even gave one of the witches a ride in the movie Hocus Pocus. I was a star! The witches thought they were the stars, but really I was.

Story and art by Kaitlyn Concilio 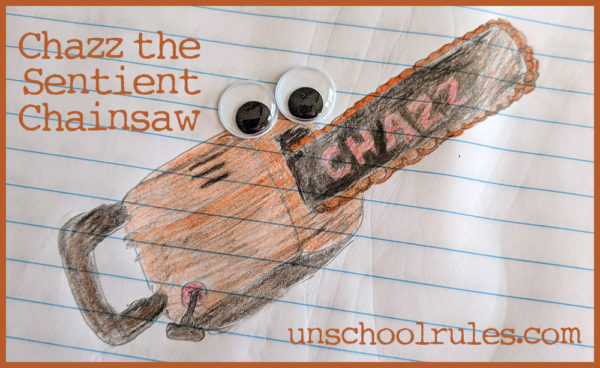 (Editor’s, aka Joan’s, note: It took Kaitlyn like two weeks after she drew her chainsaw to write his story, but when she did, she REALLY WROTE.)

Charles was not a happy chainsaw. All the other saws in the Sears picked on him, saying he was too small, his engine too weak, his teeth too dull. He figured they must have a point. After all, generation after generation of the other saws came and went, selling out and replaced by new models, while he just sat on the shelf, collecting dust. One day, a young boy in a dirty apron slowly made his way around the entire tools area, appraising everything he saw, picking up everything sharp before putting it back. The boy was just about to leave when he spotted Charles sitting on the lowest shelf. He walked over, picked Charles up, hefting him from hand to hand, then walked off to the register without a word.

Charles was nervous. He was excited of course, but also worried – who was this kid, and what did he want to do? He was especially confused when he was taken inside a small bakery and presented to a round man who looked like a larger version of the boy – only his facial expression was one of dismay. “Oh, Stefan,” sighed the large man, turning back to his oven. “Such a tiny thing will never get rid of that,” he said, gesturing to his right. Charles suddenly noticed an enormous wooden ceiling support beam… or at least, that’s what he thought it used to be. What it was now looked like a tree had fallen, crushing a large unidentifiable piece of machinery.

“I’m… I’m sorry, father,” said Stefan, his head bowed. “It was all we could afford.” His father turned at this, offering a sad smile. “I know, my boy. I was not blaming you. But I’m afraid this means it’s over. We can’t make enough with the slicer out of commission, so we’ll have to sell. Come, help your old father with the mixer one last time.” Choking back tears, Stefan set Charles on the table next to the cooling rack, and followed his father into the prep room.

Charles felt miserable. The other saws had been right – he was too small, too useless. He couldn’t even muster an imaginary scenario in his head where, if he just put his mind to it, just think-I-can’d enough, he could slice through that beam. It was freakin’ enormous. “And I can barely slice through butter,” he grumbled to himself, swiping his nose against the large tub of same that sat next to him on the table. He gazed despondently at the perfect rows of bread loaves arrayed on the cooling table. Now that, he could imagine. He pictured himself poised over the top of a particularly fluffy loaf, biting into the flaky crust, cleaving through the whole thing with ease. “Even easier than mowing through zombies,” he growled. (Every chainsaw fantasizes about being used during a zombie apocalypse, because it means almost unlimited sawing through relatively soft objects.) “I could do this for days…” he said, trailing off as an idea occurred to him.

Stefan and his father sprinted back into the oven area, Stefan unsure if there was a large cat loose and the baker concerned another of the machines had jammed, eliminating even the meager amount he might resell it for. They both stopped dead just inside the doorway, mouths agape at what lay before them. Charles was halfway through a loaf when they came in, and he instantly shut himself off and rolled off the bread, suddenly mortified at what he’d done without even asking permission. “Who… who did this?” asked Stefan. His father, though, just walked over to the table, his expression unreadable. “I did,” said Charles in a small, gravelly voice. “It was my fault.” Still saying nothing, the baker picked up one of the loaves Charles had ripped into. “What? How?! Why would you do this?” cried the boy, falling silent when his father raised his hand to shush him. “How many did you do?” asked the baker in a quiet voice.

“Only a dozen or so, sir, I’m really sorry. I’ll never do it again, just please…” pleaded Charles, fearful of getting returned until he was bewildered by a sudden gust of laughter from the baer. “Never again? Why, you’ll do more right now!” he exclaimed, throwing the bread in the air. “Twelve loaves in a minute, and buttered? My boy, you’re going to slice as many loaves as your heart desires! Stefan!” He motioned to the boy, who was now grinning ear-to-ear, to come forward. “Get Charles whatever he needs and then get back to mixing! We’ve baking to do!” Humming to himself, he strode back to the prep room, leaving Stefan and Charles alone. “I don’t know, Charles,” the boy said, his face turning serious. “I don’t know if this will work.” Charles’ heart sank. To come so close to finding his place, only to have it snatched away…

The boy broke into a grin, grabbed a Sharpie from the table, knelt down beside Charles and began to write on him. “With your engine going constantly, I think you’re more of a ‘Chazz,’ what do you think?” In response, Chazz just revved up his motor and got to work.

Story and art by Chris Otto 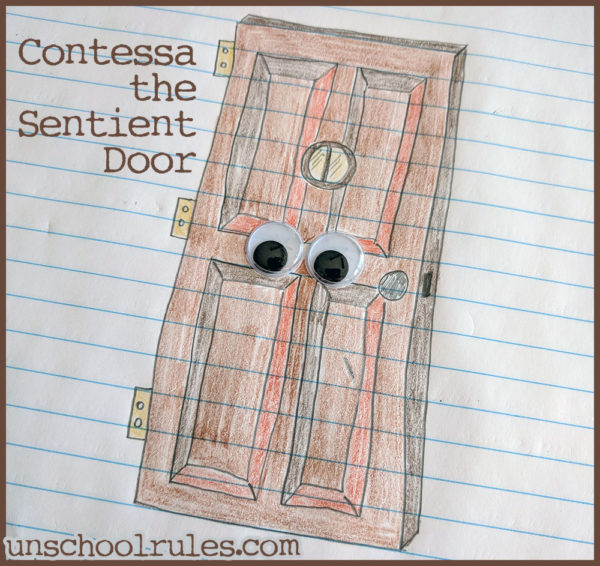 Contessa is a very old sentient door. More than 200 years old. She was, for many years, attached to a house that was built when she was. But that house is gone now. For awhile, Contessa was discarded and sat in a junkyard, where nothing around her was sentient, but there was a nice raccoon who kept her spirits up. Then, one day, a lady discovered Contessa and moved her to a store, where she now sits next to many other old things. Visitors compliment Contessa every day, and the air smells like cinnamon.

Create your own family writing project

What in your house would you like to see come to life? What stories does that object have? Start with the questions we listed above, or ask even deeper questions!

2 thoughts on “A fun family writing project: What if your stuff came to life?”