The best news today is that Ashar, entirely unprompted, wrote a “fan fiction” story about Jimmie Johnson and a car race, following yesterday’s NASCAR exploits. She printed it by hand (almost unheard-of) and took up a page and a half of college-ruled paper. She even included dialogue, complete with quotation marks, and she cast herself as one of the race announcers.

Folks, this is huge. Not typing something, and using neat printing instead? Working on FICTION – and creative fiction? (Ashar’s a nonfiction kind of girl to the core.) If that’s the only thing we accomplish in the rest of the year of homeschooling, I’ll call it a win. Lowe’s is not by any means paying me, but I feel like I should pay THEM. Best 10 bucks I’ve ever spent!

In less-enjoyable news, math is a struggle for us. Math was one of the classes Ashar absolutely dreaded at her school, despite getting fairly good grades. For a lot of reasons, it just was a really bad experience. I admire her two teachers to no end, because they really tried to make it work for her, but it just didn’t, and I think we’ll have fallout from her perception of math as “torture” for quite a while.

As I mentioned, we’re not using textbooks, and we’ve been pretty informal on a lot of things. Ashar’s also not much of a worksheet type – which is probably going to make people who know me well laugh a little, as I used to beg for workbooks to do “just for fun.”

But in part because of the “math stress factor,” I want to be extra-sure Ashar doesn’t forget what she knows and I want to be intentional about building her confidence back up in math, because the thing is, she really IS good at it. So we took a trip to Books A Million today to see what they had in the way of a grade-level math workbook that Ashar wouldn’t hate. 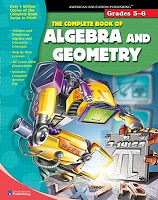 She really had gotten into “The Complete Book of…” series, in which she’s on her own chosen and devoured parts of “American Facts and Games”, “Presidents & States” and “U.S. History.” So when I found their “Complete Book of Algebra & Geometry”, I thought that might be as good as it was going to get.

Ashar was game, especially when I told her that my only expectation was that she try to do a page per “school day” (not that we really define those very specifically!) for the rest of our year, and that she can choose which page to do. Of course, we’re starting with the easiest and least math-like (a crossword puzzle with algebra terms), but who cares? At some point, I wouldn’t be surprised if we abandon even this level of formality, but for now it works for us.