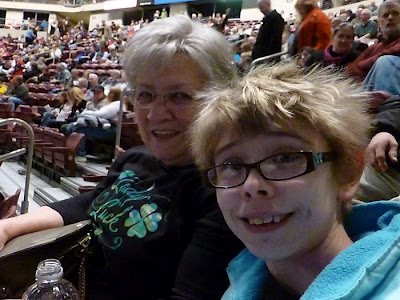 Tonight, Mom, Ashar and I went to a Celtic Woman concert in Hershey. AMAZING doesn’t do it justice. We watched as their violinist, Máiréad, spun in a circle and swung her hair while still playing at an incredibly dizzying pace. Our seats were great, and in fact, the bagpiper at one point came out just feet away and started walking toward the stage.

It was great to have a “ladies’ day,” and great to get to talk about this music, which is very much a part of our family’s heritage. We listened to perhaps Ashar’s favorite group, Celtic Thunder, on the way to and from, and even had an in-car singalong and drum-along. This coming Sunday, we’re adding my sister Linda to the group and going to see Celtic Nights here in York.

In other news today, we went – at Ashar’s urging – to Kiwanis Lake to see the ducks and geese. (Not time yet for the egrets and herons, which nest there later in the spring and summer!) I think Ashar could happily spend hours just watching the birds. She had a great idea, too. There’s a big sign there that says “Feeding of waterfowl prohibited,” but Ashar suggested they should put in good bird food in the dispensers where you insert a quarter and get a handful. “So that little kids could learn how to enjoy the birds, plus they could make some money,” was her reasoning.

I told her she should write a letter to the city with her suggestion, and I think that’s just what we’ll do!