Is it possible we’re living in a world that isn’t what we think it is?

That’s the big question posed by The Matrix movie trilogy, one of Ashar’s favorite series and the reason she’s decided she wants to study philosophy this year, in large part thanks to its compelling star. 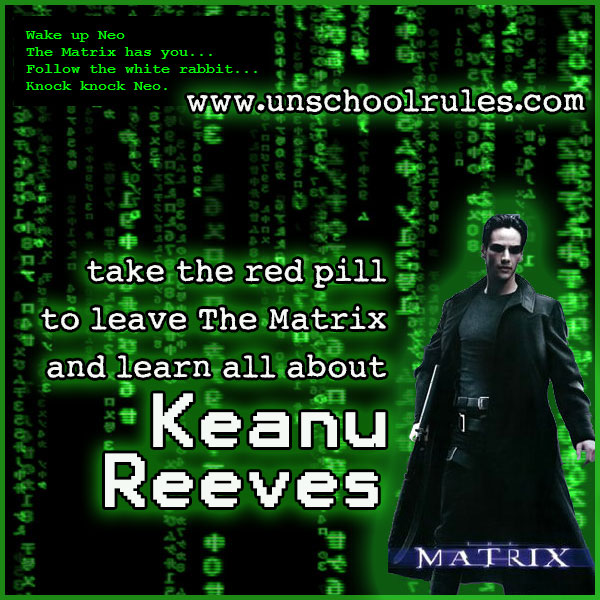 All about Keanu Reeves

Keanu Reeves was born in Beirut, Lebanon, on Sept. 2, 1964, and raised around the world before becoming a naturalized Canadian citizen.


Disclosure: This post has some affiliate links. I only link to things we legitimately use and recommend, so if you see such a link, it's because we really do believe in the book or item!
His father was Hawaiian-American, and Keanu means “cool breeze over mountains” in Hawaiian. It’s derived from his great-great-uncle’s name, Keaweaheulu, which means “cool breeze raising.”

Keanu dropped out of high school (in fact, he attended four high schools in five years and was expelled from one of them). However, he’d been acting since he was 9 years old, and after he dropped out, he pursued acting. He had several roles in the mid-1980s and early 1990s, and he was in a band called Dogstar, where he played bass guitar, in the 1990s.

In 1992, he played Jonathan Harker in the Francis Ford Coppola version of Bram Stoker’s Dracula, which we’re hoping to watch since that’s one of the classics Ashar is reading this year, and in 1994 starred in Speed, which we’ve seen most of as well and want to catch the rest of soon!

Reeves has his own star on the Walk of Fame in Hollywood. He gave $50 million of the $70 million he made for the last two Matrix movies – or maybe more, some accounts say as much as $75 million – to the makeup and special effects crews for the movies. That floored us when we found out about it – pretty cool!

He’s also a huge motorcycle rider, and has been in a huge number of fairly serious accidents. He’s still alive, but he’s got a lot of scars, fake teeth, a plate in his neck… it’s been pretty bad!

Books and movies related to The Matrix

Special effects were one of the highlights of The Matrix. Here’s a look at how “flying” happened in The Matrix.

Some of the best clips from The Matrix

This nine-clip series shows some of the best scenes from the original film. If you haven’t seen it, there’s a lot of cool action and food for thought to check out!

However, the very first clip there starts just after Ashar’s favorite line, about the splinter in your mind. She was adamant that we needed to include that too! You can check that out here.

If you’re interested, there are many more cool facts about famous people with September birthdays from my fellow iHomeschool Network bloggers. Click the image below to check them out!

And thanks for stopping by to help me celebrate Keanu Reeves!

Many thanks to Jamie Zawinski, creator of the background I used for our Matrix collage image!

5 thoughts on “Into the Matrix with Keanu Reeves”