In early 2011, our family took a trip to the Franklin Institute in Philadelphia to see a special exhibit on the life and work of Leonardo da Vinci.

Very unfortunately for today’s post, photography wasn’t permitted in the exhibit, but even without pictures as a reminder, we’ve remained interested in the work of this artist, inventor, scientist and mathematician.

And that’s why, for what would have been his birthday on April 15, I’m sharing a few resources and thoughts today about da Vinci as part of the iHomeschool Network’s celebration of April birthdays. 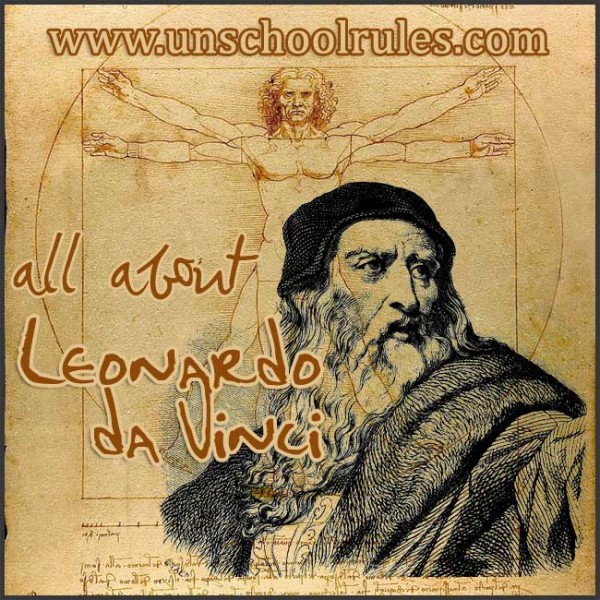 All about Leonardo da Vinci

Disclosure: This post has some affiliate links. I only link to things we legitimately use and recommend, so if you see such a link, it's because we really do believe in the book or item!
He was the illegitimate son of a wealthy notary, Messer Piero Fruosino di Antonio da Vinci, and a peasant woman, Caterina. His name really means Leonardo, son of (Sir) Piero, of Vinci, so he doesn’t have what we’d call a traditional last name!

While he was fairly well-educated in many disciplines as a child, it was art that really caught Leonardo’s eye, and he apprenticed himself to artist Andrea di Cione, known as Verrocchio, when he was 14. He worked with Verrocchio for many years.

Now, we recognize da Vinci as a true Renaissance polymath – a man who could invent with an eye for mathematics and architectural detail, an artist, a philosopher. But during his life and the years after, he was primarily known for his art, most notably his paintings of The Mona Lisa and The Last Supper. He was a much more prolific sketcher than painter, however, keeping dozens of notebooks of sketches; one of his most famous is The Vitruvian Man, which I love because it combines the ideals of art and math as it studies human proportion.

If you haven’t seen it before, one of my favorite da Vinci inventions is the mechanical lion. Legend has it that da vinci may have actually built a working version of this for the king of France that actually stopped and dropped several flowers!

In this YouTube video, you can see a reconstruction based on da Vinci’s sketches of this mechanical lion. I can’t imagine building such a thing using today’s technology, and here was a man who envisioned it hundreds and hundreds of years ago! We were able to see a different replica of this at the Franklin Institute exhibit, and it is the one thing I truly wish I had photos of!

Books and more to help you learn about Leonardo da Vinci 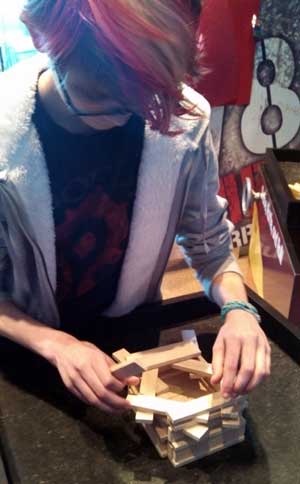 If you happen to be on the East Coast of the United States, I highly recommend a trip to the Da Vinci Science Center in Allentown, Pennsylvania.

So does Sarah; in fact, when I started working on this post, that was what she said I had to be sure to tell everyone to go and do!

The museum is designed more for slightly younger children than Ashar, but she still had a great time with some of the more advanced exhibits, like the “build an earthquake-resistant building” one you can see her working at here.

She also loved learning about the museum’s namesake, da Vinci, and his dream to build a 24-foot-tall horse sculpture. You wouldn’t think this would be an architectural feat, but it truly was.

You can read more and watch some cool videos about this on the museum’s website here!

And thanks for stopping by to help me wish Leonardo da Vinci a happy birthday!