One of the coolest parts about our family’s experience with 4-H, especially being part of our local Wildlife Watchers club, has been learning how to landscape to attract birds and butterflies.

Our “garden,” such as it is, is a work in progress, but it’s getting there. And we’ve got proof – a bunch of spring wildlife has arrived in recent weeks.

We’ve got a bunch of bunnies… squirrels… chipmunks… slugs… and plenty of robins. We do occasionally get hummingbirds, though we haven’t seen any so far this year, but we did spot this beautiful fellow for the first time in our yard last week. 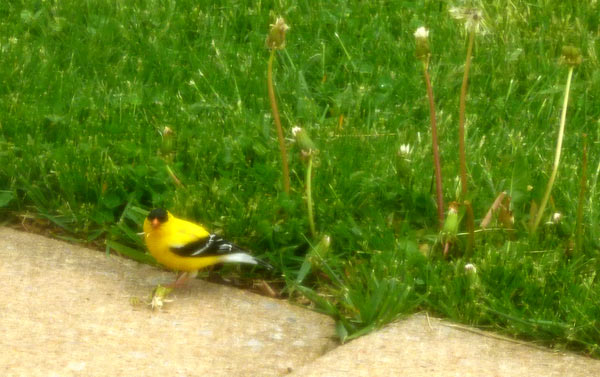 He’s an American Goldfinch. Ashar was pretty sure that’s what type of bird it was – “some kind of goldfinch,” she said – but we pulled our our trustiest bird book (a 1970s copy of Birds of North America, almost a family heirloom!) to double-check, and then found she was very right! 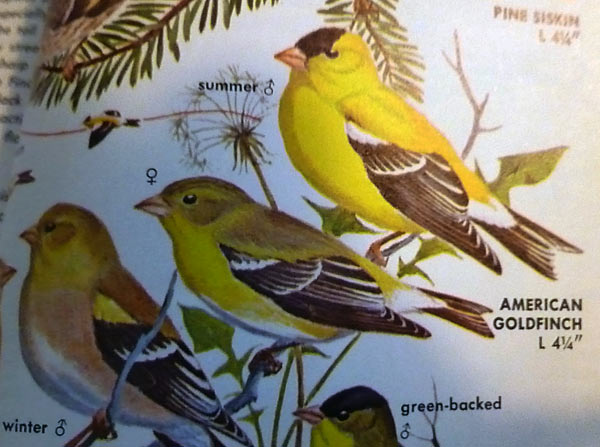 Interestingly, one thing we watched this tiny bird do was jump on our dandelion stems, pushing them so that the puff at the top of the now-withering dandelion was more at his level before eating the dandelions.

Ashar said, “I wonder what he normally eats!” Well, enter the bird book, which tells us… 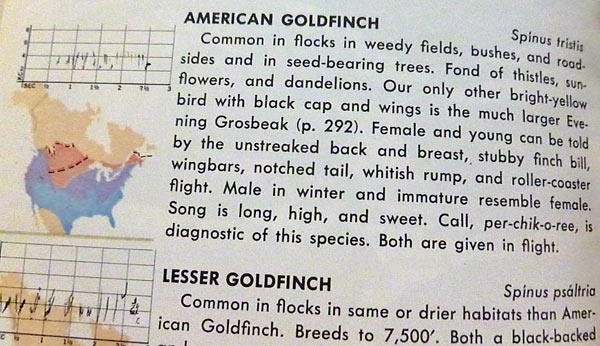 Dandelions are one of their favorite snacks! Reason #100 why I’m glad we, unlike most of our neighbors, haven’t hired a lawn service to get rid of them! 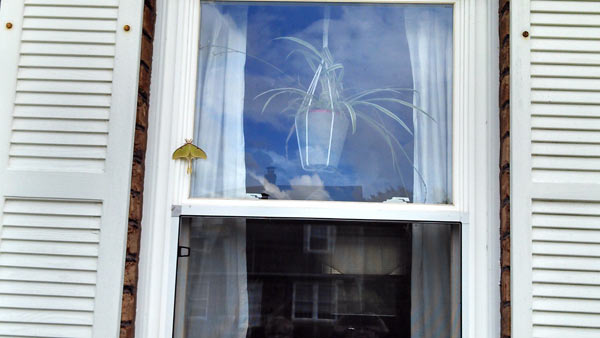 Our other visitor was a bit more uncommon – and a little more tragic. We came home from the state alpaca owners’ show (another 4-H involvement!) and I said, “Wait, what’s on our window?!”

A closer look showed THIS:

Which, as it turns out (and after we investigated from inside as well and got a good close-up of the antennae)… is a luna moth! 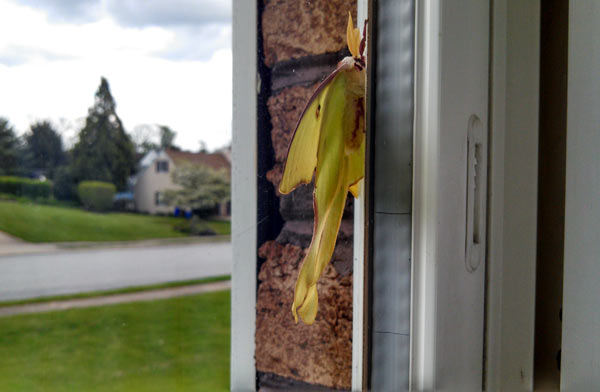 This identification, too, came from one of our many wildlife books, this time an Eyewitness Books guide to butterflies and moths. We actually have better “ID guides” for moths and butterflies, but Ashar found this one and I said, “Well, we can page through and see…” and lo and behold, here it was! 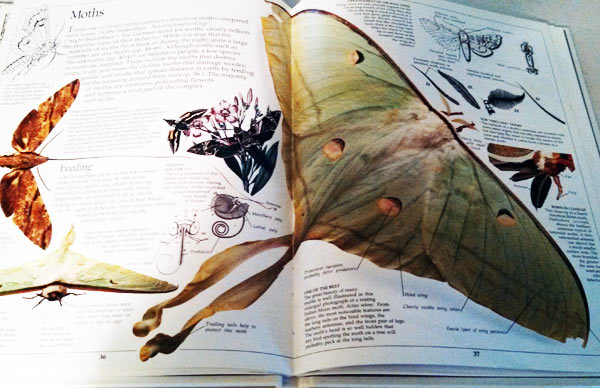 The one in the book is an Indian moon moth, but there are many variants of the moon moth or luna moth, Actias selene. 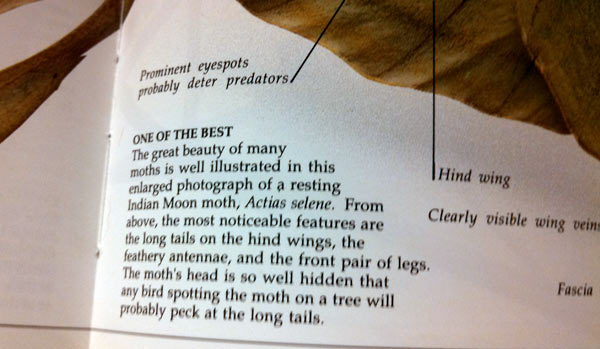 After doing some extra reading online (thanks to a gentleman who breeds these from his home in Canada!), we realized that our moth was looking for a mate. She (we think) fought the good fight, but we may have caught her on the post-mating downcycle, which is pretty short.

It turns out that adult luna moths don’t even have a proboscis or mouth – no way to eat. They only live as adults for about a week, and they do so entirely subsisting on food from their caterpillar stage.

This moth held on to our window for quite a while, but it was a SUPER windy day, so eventually it fell to the ground, whereupon Chris and I, ridiculous nature-lovers, carefully scooped it up along with the mulch it was clinging to and helped it to a nearby lilac tree, where again it hung on through some ridiculous weather. We thought it flew away, and maybe it had – but later, Chris found it on the ground under the tree, bedraggled, wings torn, but still kicking!

So back on the tree we helped it get, and the next day, it appeared to be totally gone. We’re going to say it flew away, because… yeah. I got emotionally invested in a moth. (Moreso than Ashar, actually, though she certainly kept close tabs on it!)

I love having a home where we attract beautiful wild things! (Of the animal and human kind…)

8 thoughts on “Our backyard wildlife-identifying adventures”