One of the most fun things I did last year was to sum up some cool parts of our family’s life as part of the iHomeschool Network’s 10 * in * 10 series, where we shared some top-10 lists each week in the spring.

I’m thrilled to be taking part again this year with some new topics and some changes in my own mindset and experiences to share!

This week, a bunch of us are talking about 10 toys that last in our homes.

Ashar’s now a teenager – so anything that’s lasted this long MUST be a winner! 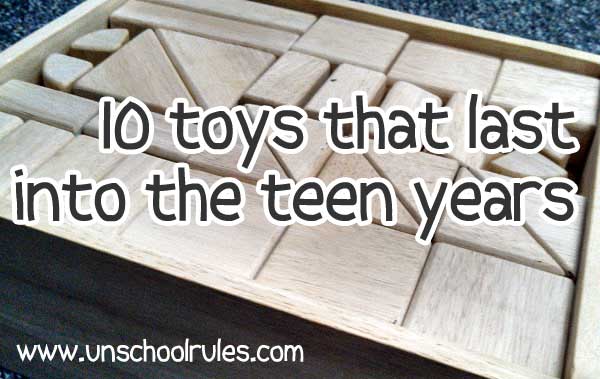 
Disclosure: This post has some affiliate links. I only link to things we legitimately use and recommend, so if you see such a link, it's because we really do believe in the book or item!
We bought them maybe 8 or 9 years ago because Ashar loves the feel of natural wood, and because she needed some larger blocks to build big structures.

She’s still loving them! She and Chris have built castles even in the last year with them.

One of our friends actually suggested this Melissa & Doug 60-block set, and while I don’t remember who it was, I know I’m eternally grateful.

Super added bonus? One time, when Ashar was quite young, she drew all over them with pen. They’re natural wood – so I just sanded them and they were back to new! WIN. 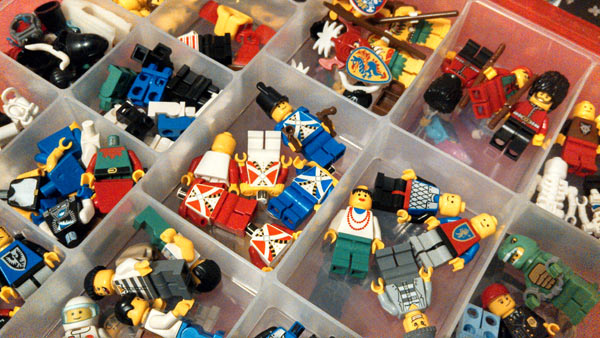 Lovely people from the LEGO company, if you are reading this, I would give just about anything to be part of your blogging team.

See, as it is, I write about Ashar’s LEGO collection, oh, I don’t know, all the time? So I’m clearly a big promoter!

OK, enough groveling. These probably made 90 percent of the lists in today’s linkup, but I can’t leave them out. Ashar has had LEGO sets since she was born, literally, since she inherited many of mine, and in turn, I’d inherited some of mine from my (8-years-older-than-me) nephew!

And, in cool both-sides-of-the-family history, she also gets to play with some of the LEGOs from Chris’s childhood every time we go visit his mom, who saved them in a shoebox for the grandkids to play with!

Minifigures are probably our biggest specific LEGO love. This is just a small sampling of Ashar’s collection; there are tons and tons more out where she’s playing with them!

They’ve worked out great, because we can act out almost anything. Reading Percy Jackson and the Olympians’ The Lightning Thief? Need a Minotaur? WE HAVE A MINOTAUR. Suddenly need to replicate Godzilla’s takeover of Japan? WE HAVE GODZILLA. It’s pretty cool. And maybe just a little scary. 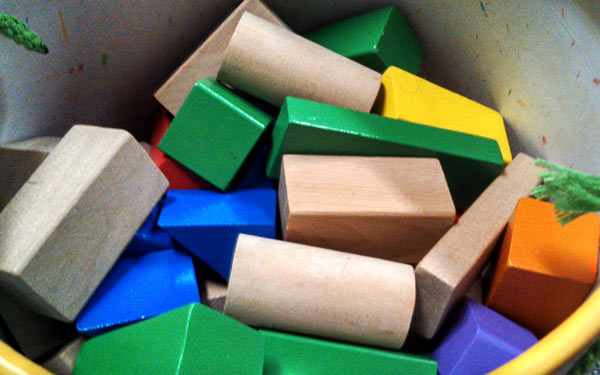 This Imaginarium 200-piece set is our smaller-sized companion to the set above, great for adding color and details – and building “homes” for smaller things! Right now, I don’t think Imaginarium, the maker, sells the 200-piece set we have, but there is a 150-piece one that’s close to the same size.

We love these for many of the same reasons we love the set above. They’re real wood, they spark a ton of creativity, and they’ve lasted for ages and ages; I think we bought this set maybe for Ashar’s 7th birthday! If you have even younger kids, the lid to their tub is a shape-sorter, so they can start to tell squares from triangles and so on.

Full disclosure, we STILL sometimes put them away through the shape sorter. So there. 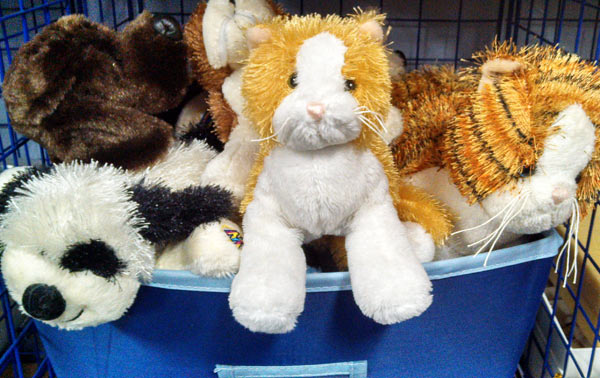 Ah, Webkinz. Ashar has something like 40 of these combination stuffed-animal-meets-online-game friends.

She knows all of their names, plays with them, sorts them (this bin is all dogs, cats and “regular” house pets; another is zoo animals; another is mythical creatures…) and generally has a great time with them in real life, but she also plays with them online, giving them fancy bedrooms and clothes thanks to the codes that come included with each stuffed animal.

I have to admit, I didn’t think these would be such a lingering interest, but Ashar was just scoping out a new addition in the grocery store last week! 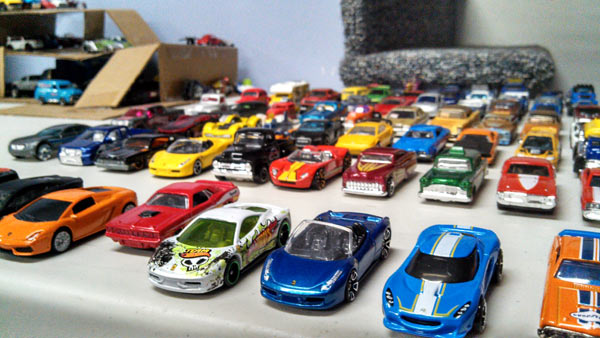 Ashar has a rather awe-inspiring collection of Matchbox and Hot Wheels toy cars that she plays with all the time.

In fact, this photo is from a display set up in our basement rec room right now – complete with handmade parking garage in the background. Ashar has “stories” made up for each of the cars, like how they’re in car school, how some like ice cream, how some are good leaders and more. And that’s not counting the fact that she knows what make and model each is “for real,” as well.

She has a VERY specific set of favorites. Her biggest joy comes from lining up the cars in the “right” order, with her favorites leading the line. (I’m also supposed to tell you that she likes Hot Wheels better than Matchbox, because there are “more options,” but she’s got plenty of both.)

Ashar even has two car-collector’s history guides – Matchbox Cars: The First 50 Years, and Hot Wheels Forty Years. She’s been through both cover-to-cover, and knows which of her cars appear where in each book.

While I didn’t put today’s list in any particular order, these might be the No. 1 favorite. It’s close between them and LEGOs! 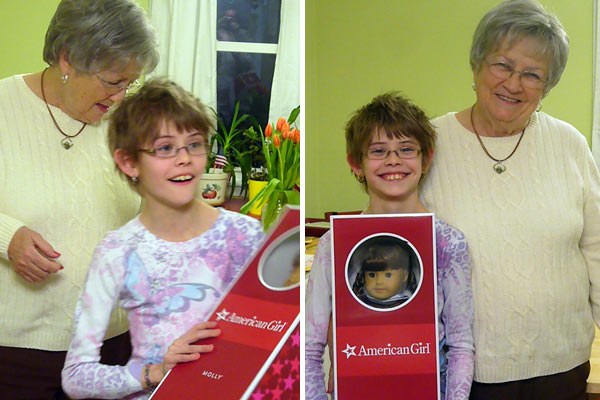 This probably marks Ashar’s “oldest” toy in a way – because one of her American Girl dolls is actually mine from when I was about 12 or 13 years old!

The best thing about these dolls has been their versatility. They’re keepsakes – so they’re “nice” material – but they’re also durable enough to be actually played with, not just sat on a shelf.

We also love the book series featuring each of the dolls – that’s been a neat springboard into history for Sarah. The neatest example was the one pictured above. That was from Ashar’s 11th birthday in 2011, when my mom, who grew up in the late 1930s and early 1940s and remembers World War II well, bought Ashar “Molly,” the American Girl doll who grows up during the same time.

Talk about bringing the stories home for Sarah! 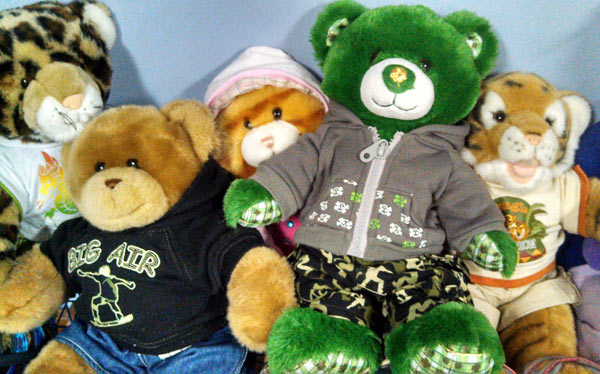 These are just a handful of Ashar’s Build-a-Bear collection. She’s been making these things for at least a decade; I think she got her first one right around when she turned 3.

But Ashar loves them! She still enjoys the experience of creating them, too; she just built Percy, at the far left, who’s an Amur Leopard, earlier this year! (If you care, also pictured are, from left after Percy, Nicky, Sammy, Lucky and Stripes.) 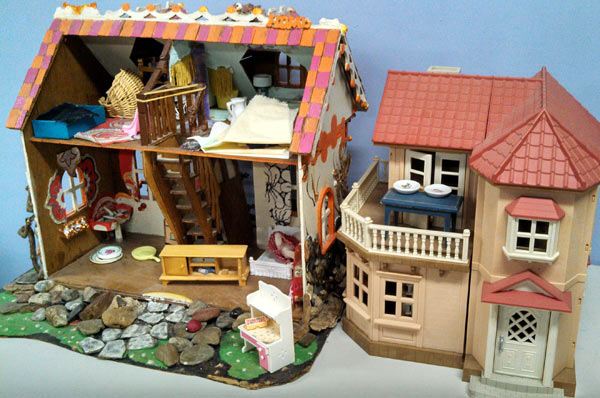 Ashar is the proud owner of two fairly large dollhouses.

The first, the one you see at left, was handmade for her by an “honorary grandma” – the mother of one of our longtime family friends who was Ashar’s babysitter through much of her early childhood.

It is truly one-of-a-kind – and it’s fascinating, from its tiny birds’ nests to its real-rock flagstone path to its tiny handmade curtains. This is something I hope Ashar will pass down to her own children one day!

The dollhouse at right is the “expansion home.” It’s from the Calico Critters series (it’s their “townhome”), and Ashar has not only the house, but several of the little Calico Critters animal families that live between the two homes.

I have to admit, I thought the Calico Critters stuff was a bit pricey when Ashar first asked for it – but it has been well worth the cost, as it’s really lasting-quality, plus lasting-interest-value! 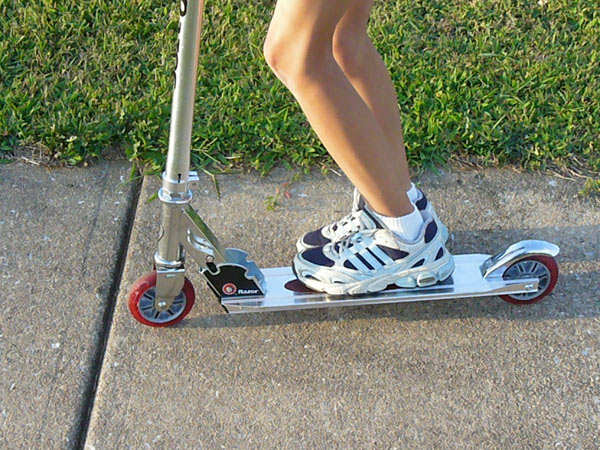 Ashar got her first Razor scooter in 2009 – which is when these photos are from.

She used that scooter hard! I mean, this became a major mode of transportation, probably much moreso than it was ever intended.

And this past Christmas, when Ashar was 12, she actually asked for a replacement for her much-loved but kind of beat-up Razor.

So now she owns a blue one (“for good”) and this red one as a spare, or for when friends come to visit. 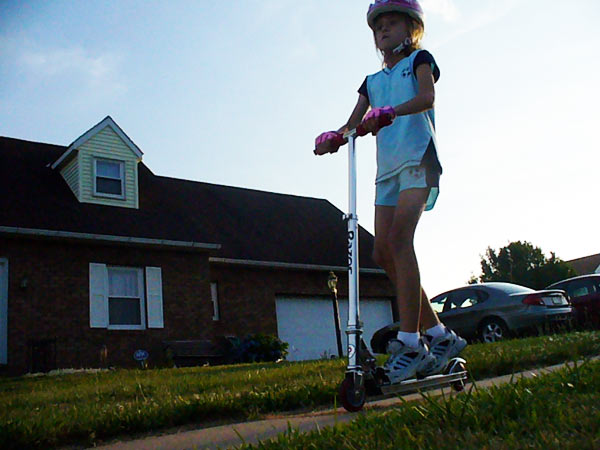 I can’t finish off this list without including some of the approximately half-ton of sporting equipment that’s a fixture in our home.

We almost always have a football, a soccer ball, a tennis racket and a baseball bat, among many others. Lately, the soccer ball has been a big win, as has Ashar’s new basketball.

Her current “wish list” requests are a multi-purpose net, and a basketball hoop, both of which we’re diligently saving for but are a little out of reach right now.

That said, I FULLY expect both of those to be long-lasting favorites once we can finally spring for them!

We’re also linking up today to Top Ten Tuesday at Many Little Blessings. Whether you’re sharing your Top 10 questions people ask you, or a Top Ten list on any other topic, I’d love for you to link up and to check out the other blogs that have, too!

And don’t forget to check out my previous Top Ten Tuesday posts, if you’ve missed them.