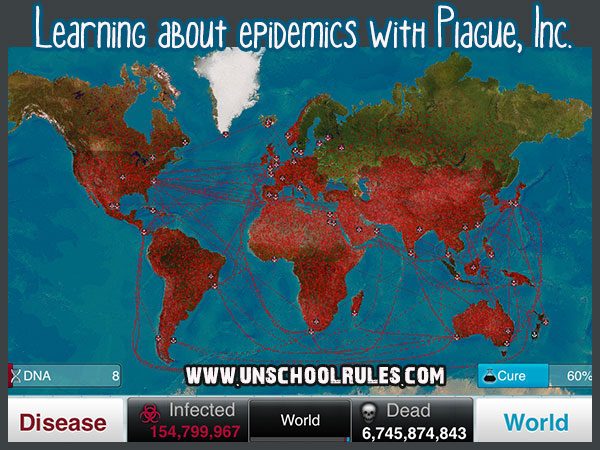 Breaking news: Billions are infected with a disease known as Red Death, which was first discovered in Spain and spread to infect every person in the world in just over a year. Doctors didn’t have enough money to start researching a cure at first, but once the disease mutated and became more lethal, with millions of people dying, research became a priority. Countries closed their borders and airports and seaports, declared martial law, burned corpses and allowed experimentation on human subjects in hopes of stopping the spread of the disease.

This is how we spent our Thursday evening: playing an app called Plague, Inc. (available on Apple and Android platforms), in which your goal is to kill the world’s population before a cure for your disease can be released. Fun, right?

It really is. “It’s more fun than it sounds,” Ashar says. (Ashar also squealed, “Ooh, biiiiiioweapons,” when she saw that option on the app screen, so maybe worry a little.) And it was Ashar’s idea to share a blog post telling people about our cool discovery; this isn’t a paid review of any kind, just something we used and loved. 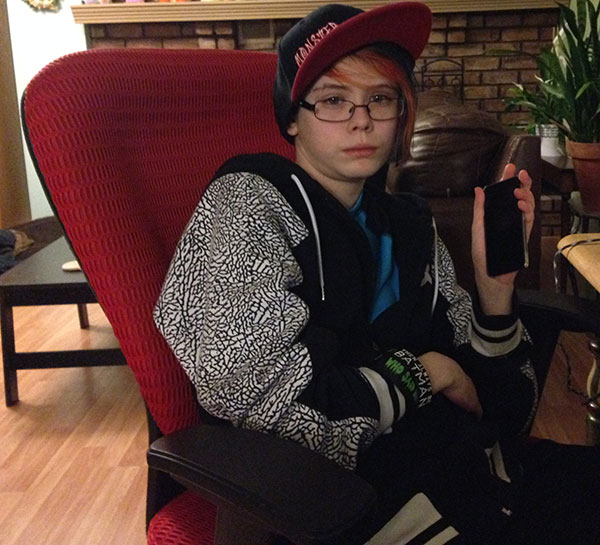 I asked Ashar to make her best “infecting the world” face.

To start, you choose your type of plague – unlocking more as you play more (or, you know, if you pay to upgrade). You start with bacteria, but you can get the aforementioned bioweapons later on too, plus parasites, viruses, prions and more.

You can also choose your difficulty level, based on people’s hygiene and work habits. Easy mode? No one washes their hands, research doctors don’t work, and sick people are hugged, not quarantined. Brutal? Doctors never go home, compulsive handwashers abound, and sick people are imprisoned. (And, of course, there’s a “normal” somewhere in the middle.)

We started with a bacterial plague named Red Death (after the Edgar Allen Poe story “Masque of the Red Death”). Later, Ashar did a more difficult bacterial plague called The Joker, and I, unoriginally, created Zeebola.

You get to pick what country your plague starts in, and it recommends you choose a place with airports and seaports, plus some land neighbors. We chose Spain at first, and that worked, in that it later spread by land to France and by air and sea a ton of places. The next time around, Ashar chose Egypt and I chose India.

Once your outbreak starts, you can watch as planes and boats travel around the world, carrying infection as they go. Your infection and death counts tick up on the screen, and you earn “DNA Points,” which you can use to do the most important work of the game, mutating your plague to help it spread and kill.

But here’s the trick: You can’t just kill everyone. As is true in real-life epidemiology, a disease that makes people too sick to travel too fast is hard to spread. You need to make people progressively sicker, letting them carry the disease with them and spread it. 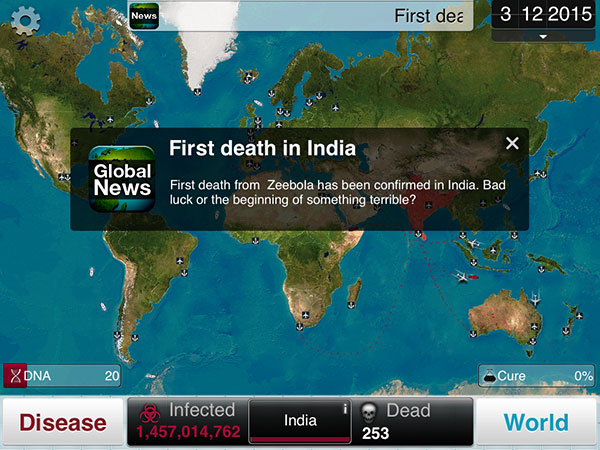 This is my disease, Zeebola, as it started killing people. It infected a lot first before it became fatal. 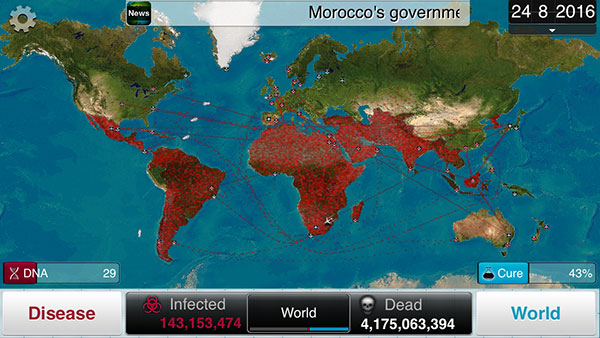 Ashar’s disease, The Joker, had a high kill rate right from the start, which is part of the reason why it didn’t infect as many people in different countries.

So, as we progressed in our games, we watched our diseases spread: Ashar’s from Egypt to Sudan, mine from India to Pakistan, and we tried different strategies. Ashar used livestock as a vector for disease spread, and I worked on my disease’s resistance to drugs. Ashar killed people fast, and I infected them fast, but at one point had infected almost 1.5 billion with zero fatalities. Ashar, meanwhile, got a warning, “The Joker is killing very fast.”

Countries in our games started shutting their land borders, but also started researching cures and distributing bottled water. Ashar realized that she could improve her disease’s spread in northern countries by making it resistant to cold. And when Sudan and Egypt started working most heavily on a cure for it, she realized that she could make it more deadly there by making it resistant to heat. 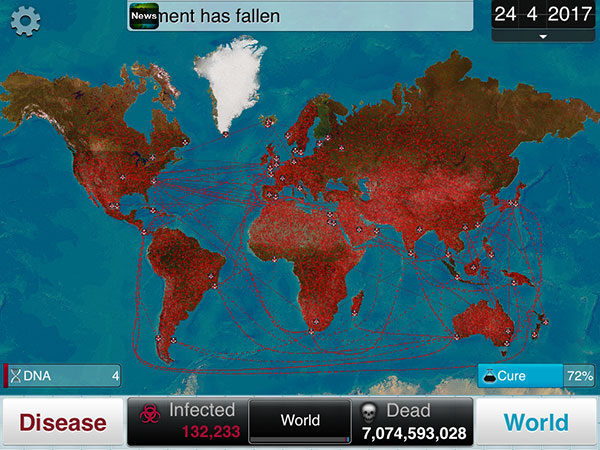 One thing that happened with my disease, Zeebola, was that it got too virulent and reached a burnout phase, where it was killing so fast that all its hosts were dying before they could spread it.

Over time, my Zeebola killed a TON of people… but it was too virulent, and it killed all its hosts with some healthy people still surviving, after being present for 820 days in the game. The cure was only 76% complete at the end of my game.

And Ashar’s The Joker was eradicated JUST in the nick of time after 668 days – her society was so crushed that it will be hard for survivors to rebuild. That ended up with her earning more points for her efforts than I did, even though a cure was deployed in her case.

Ashar says the cool thing about this app is that you get to learn how fast a real disease can spread. And that brings us to how all this happened in the first place. (She also points out that she came the closest to a win of all of our attempts.) 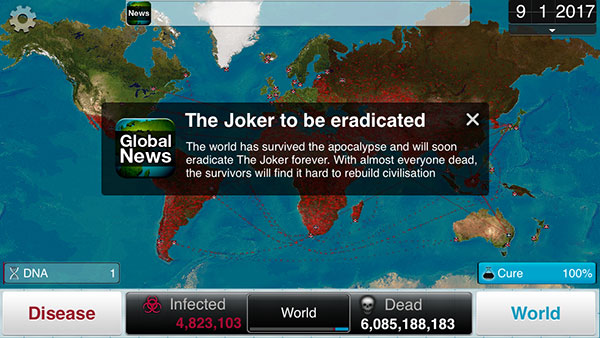 People developed a cure for Ashar’s disease, The Joker, but it killed so many people first that Plague warned her, “It’s going to be hard for survivors to rebuild.”

So why take over the world with a plague?

This all started tonight at 4-H, when our Extension agent, Mary Jo, was talking about the possibility of doing speeches and presentations at our county Speak-Out event. Ashar mentioned wanting to do a project on what would happen and how long it would take for a zombie apocalypse to happen. And I said, “HEY. I’m taking these courses on epidemics, and you can actually model that.”

And when we got home and told Kaitlyn about this project, he said, “I have a relevant internet.” And then he turned up Plague, Inc., which had come up a week earlier as part of my Coursera Epidemics, Pandemics and Outbreaks course. (I’m also taking Epidemiology: The Basic Science of Public Health and Ebola Virus Disease: An Evolving Epidemic. Not that there’s a theme here or anything.) 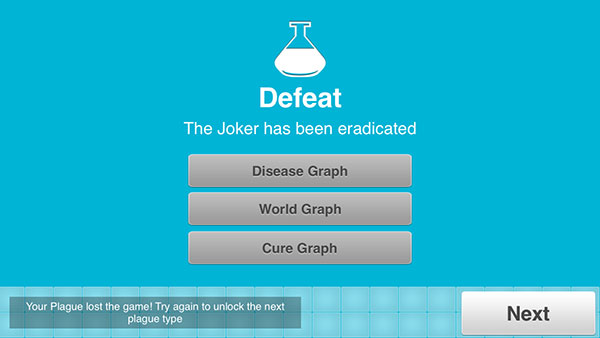 None of the three plagues we tried to create tonight succeeded in eradicating the world’s human population, but they did succeed in teaching us a lot about epidemics and culture!

I can’t think of anything cooler than combining my passion for epidemiology with Ashar’s for zombies and our shared interest in gaming (especially my contention that you can learn a TON from video games). We definitely highly recommend this game!

I write about video games and learning a lot. Shameless plug – you should check it out!

2 thoughts on “Biohazard warning: In which we try to infect the world with a terrible plague (virtually)”