When I describe us as a radical unschooling family, what that means most simply is that we take the concepts of unschooling beyond the “learning” space and apply them to other areas.

That leads to a lot of discussion. It veers into why we don’t set arbitrary limits on video-gaming or bedtime, and it also comes out when people realize that our attitudes about food are a bit different than in many families. 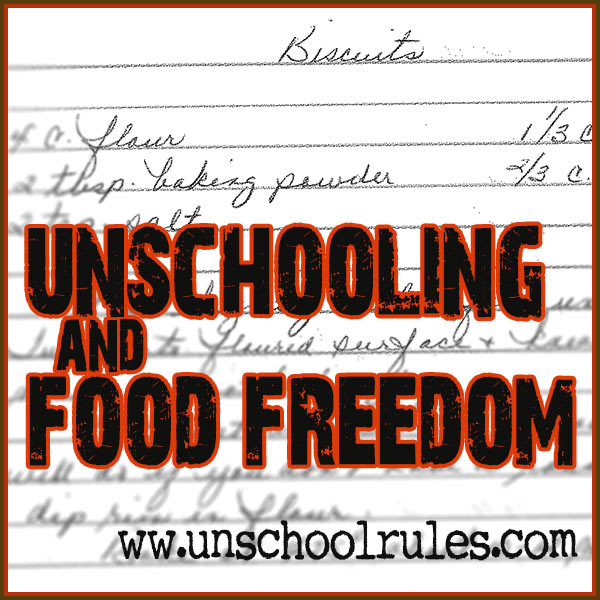 We don’t have “rules” around eating. Everyone in our house eats the things they like, and no one is obligated to eat more than they want or at a time they don’t prefer, nor are there “can’t eat” or quantity-limit restrictions.

Yet we eat family dinners together most every night, and no one is stuck in a “short-order cook” role of making four or five meals to meet all the individual preferences. Ashar eats as balanced of a diet as most 14-year-olds, and in fact has healthier preferences than many teens I know.

How does that fit together? That’s what I’m hoping to explain today.

Unschooling and food: What is food freedom?

Well-known unschooler Sandra Dodd has an amazing list of food freedom resources on her site, and that’s my suggestion for a great place to start if you really want to know more about food freedom and how to get there.

Her summary is WELL worth repeating, and a great summary of what we try to live out.

Sandra says: “Here’s the big idea: If children are allowed to turn foods down, they’re not forced to eat, and they’re given choices, they will come to choose good foods, know when they’re hungry and when they’re not, and actually learn to listen to their bodies and know what they need.”

Food freedom, at its most basic, is how most adults eat.

Think about that for a second.

You go to the grocery store. Want a treat – that candy bar you love? Chances are, if you can afford it, you’ll grab it. But if you’re watching your weight, you won’t grab seven of them; that one will be enough. If you’re allergic to peanuts, you won’t buy peanut butter. If the apples in the produce department look particularly juicy, you’ll likely pick them up – and might even snack on one as you’re putting groceries away. When you sit down at dinner, you’ll fill your plate, taking the largest servings of things you like and smaller ones, or none at all, or others. And when you’re full, you’ll stop eating.

It amazes me how many adults take this for granted, and how many assume their kids aren’t capable of making good decisions when it comes to food, and instead must be controlled.

My good friend Jen from The Path Less Taken has a great read on this topic: Won’t they just eat junk food all day? (Spoiler: Nope.) She’s also got this gem: Food: Balance, Choice & Freedom. I encourage you to check both out.

Jen does a great job, in particular, of getting at the “what it’s not” that I talked about earlier. Jen says: “I think one big misconception that people have about this is that giving kids freedom and choices means just leaving them the heck alone, keeping the pantry stocked with Cheetos, soda, and Ring Dings, and letting them have at it. That can’t be much further from the truth.”

She’s right. Like everything about unschooling, we’re talking about relationships. We’re talking about guidance, and conversations, and just experiencing life together in a way that helps give my daughter the information she needs to make the decisions that are right for her.

Food in our house

So how does this play out in our lives? Let’s look at a typical weekday:

Ashar usually comes downstairs between about noon and 2 p.m. She’s often up earlier, but she doesn’t “surface” until she’s hungry. When she is, she ventures to the kitchen and makes herself something to eat. That might be a stovetop macaroni-and-cheese meal, some pizza bites, toast, or just cheese and crackers. If my mom is also hungry for lunch, they might eat together, something like soup or grilled cheese or French toast, and they often prepare it together as well.

I actually don’t cook dinner very often; I’m incredibly fortunate that Mom lives with us, is retired, loves to cook, and has dinner on the table most nights when we get home from work. When we come in, we generally set the table (that’s an “everybody pitches in” deal), and sit down to eat.

Dinners in our house are usually a main dish and one or two sides, very simple. Last night, we had turkey, stuffing and cheesy potatoes. The night before, we had carryout from Jimmy John’s. Before that, it was a meatloaf and macaroni and cheese. We don’t eat a ton of cooked vegetables, but snack on fruit a lot, and some of us also like raw veggies. (I could eat a whole pound of radishes in a sitting.)

Most of the time, everyone eating dinner likes at least one or two of the things on the table. If they don’t, they might heat up a previous night’s leftover side, or grab some bread, or slice some cheddar cheese as an extra. If we’re making something we know only one or two people will eat, we’ll adjust a bit; for instance, when we have hamburgers, which Ashar really doesn’t like, Mom will often quickly throw a piece of salmon, a freezer staple, in a frying pan for her.

We talk throughout the day, so if, say, my roommate and I eat a particularly late lunch at work, Mom might hold dinner til about 7 p.m. If Ashar isn’t super-hungry, she might nibble a side dish but not eat a main course, and if someone is STARVING, they might “pre-funk” with cheese, a banana or a small yogurt.

And since there aren’t a ton of us – four for most dinners – it’s no big deal to make extra of something that’s a particular favorite. Baked potatoes? Ashar eats them like they’re going out of style, so we always plan at least two of those for her. Mac and cheese, which I love leftovers of for lunches? Same deal, we’ll make a big pan.

We each serve ourselves – a point I often overlook, but one that struck me when I ate dinner with a former boyfriend’s family for the first time and had a plate dished out for me. (As a 17-year-old!) And when we’re full, we stop eating.

We generally have a mix of snacks and drinks in the house, and everyone is either welcome to come grocery-shopping to make their own choices, or to add favorites to the list. With the pantry stocked with favorites, it’s easy to find a snack or, in the case of us night owls, a “second dinner” later. Those snacks might be a couple Oreos or a handful of chips, but they might just as likely be a few Wheat Thins or some slices of cheese. Drinks include sodas (I’ve got a SERIOUS Diet Pepsi habit, and Ashar likes Pepsi Next), but just as often are hot tea or water.

Interestingly, Ashar eats less junk food than she did when she was in public school and her lunches were restricted. I think because she knows there are Oreos there that she can have any time she wants, she only feels compelled to reach for them when they’re really what she’s in the mood for, not just “get while the getting’s good” as is the case in some homes.

Meanwhile, she routinely makes us laugh with her incredibly accurate sense of fullness. She can literally stand up with one bite of her favorite food on her plate and say, “I’m full.” I’m pretty sure I’ve never done that in my life, and I can attest from four years of leading Weight Watchers meetings that MANY people would be jealous of this level of willpower!

The thing that’s interspersed with all of this is a level of relationship and conversation that I don’t want to forget to mention. We talk about what vitamins and minerals come from various foods – and Ashar, who takes the same daily multivitamins as me, will often remind ME of them if we haven’t had them as our pre-bed snack for a while. She knows about watching sodium and sugar, thanks to dietary needs of various family members, and knows how to read a nutrition label. We talk about staying hydrated. We talk about how we have to be careful because we don’t like veggies very much (any of us besides my mom) and how we can get those nutrients.

And we enjoy eating meals together. It’s not forced, it’s something we all look forward to. (If we miss “family dinner time” too many nights in a row, Ashar will generally be found corralling whatever fellow house-humans she can find into sharing a meal with her, which is cool.)

In the interest of full disclosure on this whole “food freedom” thing, I asked Ashar to list her favorite foods, to convince you that a cookie-loving 14-year-old CAN, and WILL, in fact, eat things other than junk food. Here is her unedited list, in the order they occurred to her.

Just for fun, here are a few favorite foods of other people in our house.

Me, Joan: Macaroni and cheese, the aforementioned Seriously Sharp Cheddar, pierogies, extra-well-done hot dogs with ketchup and mustard, and fresh tomato salad in the summer.

None of us the most balanced, none of us super-awful, all of us full of things we really love.

Today’s post is part of a linkup with my fellow iHomeschool Network bloggers on how homeschool families “do dinner.” Click the image below to read more about how families large and small, unschoolers and textbookers and more, working parents, single parents and more get dinner on the table! 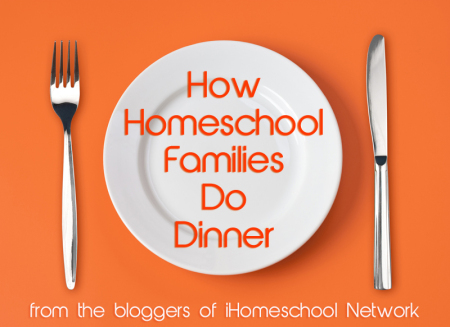 16 thoughts on “Radical unschooling and food: What it looks like at the dinner table”