First up, our triops have grown like crazy. We have three, and they’re most easily explained as some combination of a really little horseshoe crab and a really big brine shrimp. There’s a fun website, triops.com, where you can read more.

We’ve been growing this set for about two weeks, and they’ve gotten huge. The triops have provided some great science conversations, including some about what diapause is and others about how crustaceans compare with other types of life. Seeing them molt their exoskeletons has been one of Ashar’s favorite parts.

Here they were when we first started hatching them (from the kit pictured). I will warn you; this photo was before we tried hatching the FIRST half of our eggs, and while they hatched, none made it more than a few days without dying. 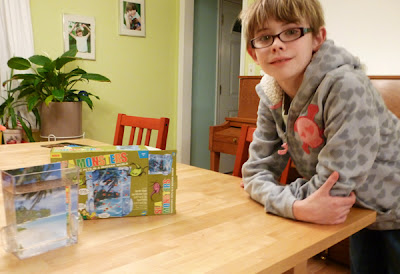 Meanwhile, the live ones from the second half of the batch, apparently a hardier lot, got their water totally changed today, a process not unlike changing goldfish water, but with a little more maneuvering required to catch them and transfer them from container to container. Then I tried to take their picture, which was hard to do in their little plastic tank. Here’s the best I was able to get.

If you look closely, you can see two of the eyes on the one at left; the word triops means three eyes, so there’s another eye there somewhere as well.

In much “prettier” news from our world today, we went to a concert at one of our two local colleges today for the group Celtic Nights. Ashar actually enjoyed this show even more than the Celtic Woman concert earlier in the week. I have some photos to share tomorrow; in the meantime, though, Ashar wrote a post on her own blog about the show, so check that out to learn more about what her favorite part was!