In big news for us, Ashar had a friend sleep over yesterday into today. Two wonderful, hyper girls laughed all over my house for just about 24 hours straight. It was great for me, because they kept each other occupied, and I hope it was great for Ashar to get some girl time! They certainly had a flair for the dramatic, as evidenced by the photo at right of their fashionable get-ups. Complete with bling. And beads. And “we got us hats and bracelets, yo!” That’s a direct quote. 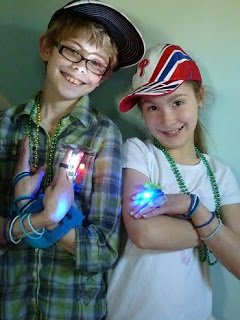 Tonight, we got to continue the drama streak. We were lucky enough that our local PBS station showed The Phantom of the Opera at the Royal Albert Hall during one of its pledge drives.

Minus the way the pledge-drive interruptions broke up the story (sorry, PBS), it was amazing. Ashar loved it, and it was especially great because we’d gone to see a performance of the musical Annie at my high school last weekend, so we got to talk a lot about HOW musical theater works and the art that goes into it.

As a total “band nerd” for most of my life, and a many-times-over performer in our school’s musicals, it of course thrills me to see Ashar so interested in something I’m so passionate about. And with both of these musicals, it was neat because I was actually surprised at how much of the plot Ashar was able to grasp, despite some of their topics being pretty deep and a little outside the purview of your average 11-year-old.

Annie, for instance, was a great springboard to talking about the Depression, Herbert Hoover, FDR and the New Deal, and while Ashar hadn’t been familiar with anything other than the presidents themselves, she quickly was able to grasp the conflict between the two administrations and the way many folks blamed Hoover for the economic crisis. In Phantom, Ashar was really interested in the idea that the Phantom was neither a bad guy or a good guy, which is a big deal because of how black-and-white she tends to be in her thinking.

She was also very interested when I told her it was based on a French novel. She says, “Do they have it in English?” and seemed very interested in reading it – even when I showed her how thick it is. Again, this is pretty major, because reading fiction, and especially fiction that requires an attention span, isn’t really something she’s historically been much for. Will she read the whole thing? Who knows, but even the interest is a good start.

Another interesting comparison, and my apologies to all the actors who’ve played the Phantom over the years: Ashar says, “You know who should do the Phantom? Johnny Depp. Because he was Captain Jack Sparrow, and he was kind of a mean guy and kind of nice sometimes too, and he looked angry and sometimes drunk a lot but really wasn’t.” I mentioned that singing isn’t maybe exactly his forte, and she says, “Well, they could do, you know, a silent movie.” (Lon Cheney must be rolling over in his grave.)

Check out more of our favorite Phantom of the Opera resources here, including how we turned this into a much larger study later in the year!