The fact is, we’re not exactly “textbook” people.

In good news, we are book people.  Lots-and-lots-of-books people, actually.

We’re not exactly “grade-level” people, either.

By Pennsylvania law and standards, Ashar, who is 12 and a half, is a seventh-grader as of July 1.

Her work and her abilities, though, literally range from about a third-grade level in some subjects to a post-high-school level in others.

Thankfully, the law in Pennsylvania, while it requires that you submit “objectives” to your school district, doesn’t require you to plan out your year or even pick a curriculum.

It simply asks you what skills you think your child will learn each year, which can be answered with broad-brush bullet points like this one:

“Student will review lower-level math fundamentals and work to increase her knowledge of subjects such as geometry and pre-algebra commensurate to her ability.”


Disclosure: This post has some affiliate links. I only link to things we legitimately use and recommend, so if you see such a link, it's because we really do believe in the book or item!
Most days, I have no idea what we’re going to learn about until it happens. We make plans – of sorts – but the best opportunities always seem to be those that just arise naturally.

With all that in mind, why am I even bothering to join the “Not Back To School Blog Hop” for curriculum week?

Mostly, because I want to show other not-exactly-planning, not-exactly-at-a-grade-level, not-exactly-textbook people – and I know you’re out there – that you CAN make this homeschooling thing work!

So with that, I give you… 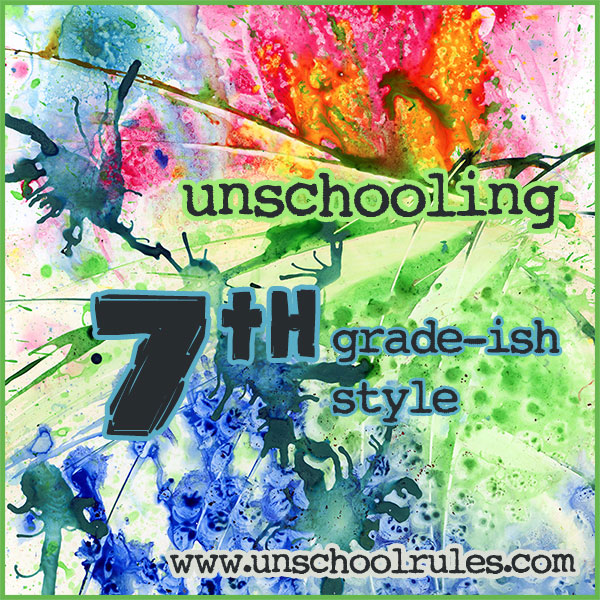 Well, let’s start with this idea in mind: What we learn about is driven by Ashar, and what we do is experienced as a family. Don’t stress about that right now. If you’re thinking, “But if I gave my 12-year-old a choice, he or she would sit around and play video games all day,” you’re probably right. So would Ashar – and she WILL play a lot of video games, which she loves.

But if you find out what your kids are REALLY interested in, you’d be surprised what you can facilitate. 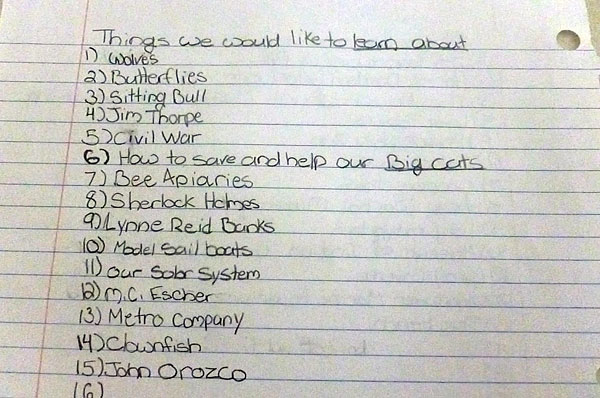 Ashar made this list of things we’d like to learn about as a family this year. (You can tell it was done voluntarily, because you can actually read it. Her handwriting when she doesn’t want to do something is truly unreadable!) 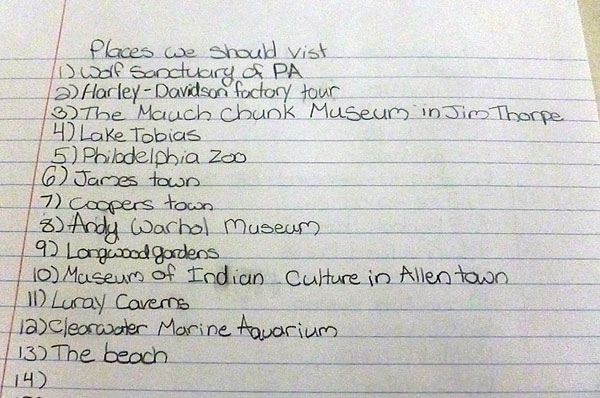 We also made this list, of places we’d like to visit, some near and some outside our state.

So how does this turn into “curriculum” – and what else will we be mixing in? As well as I can, I’m going to try to do a subject-by-subject look; most of what we do is what would in my state documentation be called cross-curricular, but this way, if you’re using a planned curriculum in some subjects and want to mix in something we’re using in another, you can see how it might fit.

This is one of Ashar’s favorite topics – and, while it was always my least favorite “school subject,” I’m finding that I’m learning a ton by experiencing history through books and trips with Sarah! Some of the items on our bookshelf include:

This list is as short as the history list is long! We have started the Life of Fred series of “math as a story” books, and Ashar is loving them!

So far, we’ve finished Life of Fred: Apples and are about halfway through Life of Fred: Butterflies, the first two books of the 10-book elementary series. I’d love to see us get through all 10 of the elementary books this year and then see if Ashar is ready to go on to Fred’s version of fractions, which is the topic she REALLY struggled with last school year.

Essentially, much of this year will be a “rebuilding year,” to quote most Phillies managers ever, but I’m 100% fine with that. Given Ashar’s significant math phobia coming out of public school, a mix of Life of Fred and some fun and games based around our favorite math-in-the-real-world resources will serve us better in the long run, I think.

Also, I want to make sure I’m clear: Life of Fred is described as a Christian series, and we are secular homeschoolers. We haven’t had any problems taking what few religious references we’ve found and using them to discuss what different people believe, which we like anyway.

Like with history, this is another area in which I don’t have to worry too much about Ashar’s interests leading us down a path. Not a week goes by that she doesn’t pick up an interest in something scientific. Some of the topics I’m guessing we’ll focus on this year:

Here’s a look at some of the books we lean on as resources in these areas.

In some ways, this is our simplest subject to explain.

Here’s the short version: We read across genres as a family, both aloud and silently. We work with Ashar to help her spell the words she needs to use correctly.

And she writes all sorts of things of her own choosing, everything from blog posts to fiction stories to her 4-H project documentation.

Now, for the longer description…

The hardest part about not “assigning” writing projects comes when I have to prepare documentation for our evaluator.

Ashar knows a lot about many subjects – including the ones we’ve talked about above – but asking her to write a report or an essay isn’t a good way to get her to show what she knows. That said, the evaluator needs something she can easily look at that shows Ashar is making progress as a written communicator, as well as in her core subject areas.

This is one area where I admit I don’t quite know what we’re going to do.

Ashar and I have talked about what we need to be able to turn in, and sometimes she’ll get it in her head to “do a project” on someone or something, so my plan right now is that I have faith that we’ll end up with a research report on Olympic gymnast John Orozco or a PowerPoint on Sitting Bull somewhere along the line!

In addition to those general notes, here are a few of the language arts-y things we’ll probably focus on specifically this year.

I could spend all day listing the things that we do in this area, which includes an awful big swath of things Ashar is interested in.

Here are just a few:

We don’t plan our days to include any particular “school times.” We learn when it happens.

That said, we’ve got a family tradition that is a HUGE part of how we learn, and that’s our bedtime reading aloud with Sarah. This isn’t simply “read a story” reading aloud, though it started out that way.

It’s morphed, though, into what is usually at least an hour and a half of devoted time in which either Chris, Ashar or I read aloud. That’s really the linchpin of our day in many ways, with the hours immediately before bed tending to be heavier in learning than the daytime ones. (We’re all night owls – yet another reason homeschooling works for us!)

And that’s where the books that figure so prominently in the lists above come in. Most nights, we’re reading and discussing chapters from three or four books on a variety of topics.

We’re even at the point where, if Ashar’s going away overnight, we sit down and read before she leaves. We read while we were on vacation. It matters, and we love making time to do it.

Will we get to all – or maybe even any – of the listed items this year? Not a clue. And I couldn’t be happier. We’re hitting our stride as a homeschooling family, and wherever this year takes us, I hope you’ll stick around for regular updates!

Don’t miss the eighth-grade-ish version of our plan here! We posted it in August 2013, and we’re thrilled to share it.

This post is also part of the How to Teach Without a Curriculum linkup through the iHomeschool Network. Click the image below to read more posts on teaching without formal curriculum!