We’ve spent the past couple of weeks inundated with back-to-school photos from friends across the country on Facebook. Some of our friends have younger kids; some have students still in high school; and many kids Ashar’s age are headed out to work or college.

For our “living is learning” family, this year – Ashar’s first since officially earning her diploma and finishing compulsory schooling under Pennsylvania law in May – isn’t much different than previous ones.

That’s why we’re still joining the iHomeschool Network’s Not Back to School Blog Hop for “curriculum week!” This time, we’re looking at what unschooling after high school might look like, not just for Ashar but for the rest of our family as well.

Each year, I’ve heard from people literally around the world who loved seeing how an “un-plan” comes together. If you haven’t already, I invite you to check out our previous ideas: 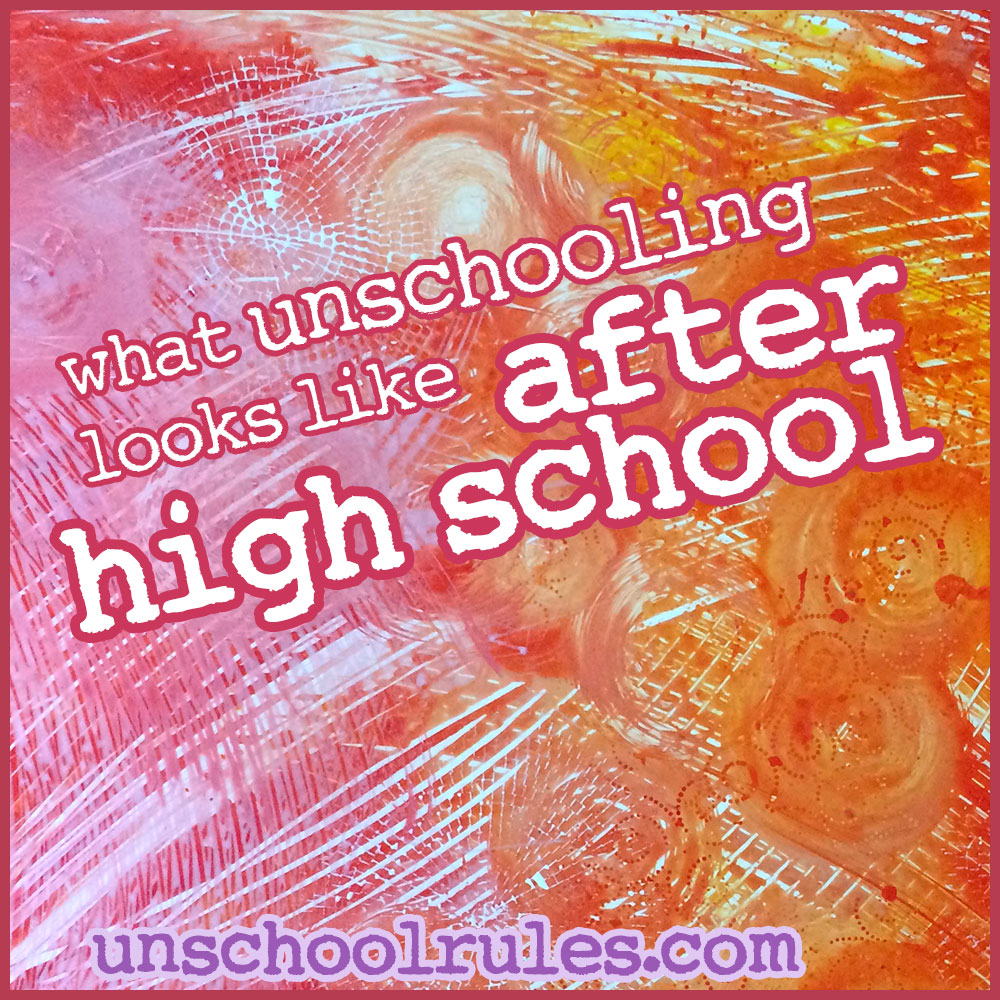 While our learning philosophy hasn’t changed, our year ahead is going to be an unusual one. But I talk to people all the time who want to know if unschooling can work when life gets weird. And the answer is absolutely yes, but sometimes I think it helps to see how.

Probably the biggest question our family has fielded for the past couple of years:

Well, we know the answer. Have you been wondering? I know you’re all sitting at home going “What ARE those wacky people doing?” Good news! This is the post for you. Also, I’m very sorry. Get Netflix. It’s more interesting.

Anyway, in all seriousness, we haven’t talked about it much online up to this point, but Ashar is having major surgery in exactly a month. On Oct. 2, he’ll go to Nemours duPont Children’s Hospital in Wilmington, Delaware, to have major spinal fusion done for severe scoliosis.

Nemours duPont is about two hours and change from our house, but it’s absolutely the right place for us to be. His team is nothing short of amazing – led by Dr. Suken Shan and nurse practitioner Alicia McCarthy, but including a ton of other great people just in our experiences to date.

We haven’t even talked much about Ashar having scoliosis, though we’ve mentioned it here and there, but… it’s pretty major. Like, whoa. Like his spine curves something like 87 degrees – almost a right angle – instead of going straight.

But you know what else is pretty major?

Ashar’s anxiety. He’s struggled with generalized anxiety for years, but there’s one thing that has always been a huge trigger, and that’s anything medical. Routine doctor visits were a no-go for years. (Thank goodness he was rarely sick.) The dentist and eye doctor were always all right, and chiropractic adjustments over the past few years helped him get used to it a bit more, but hospital? Nope. Not even slightly.

But after not actually bothering him for years, Ashar’s curve was starting to cause him pain – and other health problems. (Did you know that when your ribcage touches your pelvis, you cough a lot?) So we decided to see what we could work out. Thanks to an AMAZING physical therapist, Andrea Yaktus at Empower Physical Therapy in Exton, we found out about Nemours and were able to get things in motion.

Ashar’s doing “prehabilitation” work with Andrea, which is amazing. (This woman is going to drive an hour and a half to our house after the surgery to go for a neighborhood walk with Ash. I’m not kidding. She’s seriously the best.) After some recovery at home, Ashar will go back to Andrea for outpatient PT in the months following the surgery too. They’re saying he’ll be back to full activity in about six months, which is mind-blowing.

Relatedly, this whole experience has helped Ashar be ready to pursue counseling for anxiety and some of the other things he struggles with. We don’t talk a ton about it, but Ashar has ADHD, autism and OCD on top of the anxiety, and life is just hard for him sometimes. He is my hero, because every day, he gets up and keeps trying. Adding a counselor and a psychiatrist (who’s going to help Ashar find an anti-anxiety medicine that’s a good fit) to the “medical mix” was also scary, but Ashar thinks it’s really helping.

As a fun side note, that is largely thanks to the Nemours team too. Ashar had to have a full-spine MRI, which was done under sedation, and they gave him some Versed to help him relax before starting the laughing gas and sedation. The change in him with the Versed was basically nothing short of miraculous. He wasn’t silly like he got as soon as the gas hit him – he was just CALM. “I feel OK,” I think is what he said. When we explained that medication absolutely can help other days be more like that, he – on his own – asked his counselor to make him a referral to psychiatry for medication support.

I could say tons more about this whole experience – and I’m sure I will – but for now, let’s just say that we expect focusing on the prehab, the surgery, the rehab and the accompanying anxiety to take up the better part of this year (and to be a learning experience for all of us).

Separately from that, though, Ashar has other plans and hopes. And we have other adults in the household who are living and learning as well. Here’s a short look at some of the rest of our lives.

As a quick wrap-up of the past year, Ashar says:

My mom, Ashar’s Mommom, is back on her feet again after a heart-medication tuneup over the summer. She may still have more adjustments in the future, but she’s starting to feel a good bit better and has a lot of fun stuff planned for her and Ashar to do.

Some of their highlights:

Mom also is staying involved with Stephen Ministry at her church. She started the program there, and campaigned and campaigned to get her friend Barb trained as a fellow Stephen Leader so that she could ensure the program will be successful even if her health keeps her from being as active in it. So her goal for this year is getting Barb fully up and running, and staying involved as much as she can herself!

She also wants to get to the beach, which I think sounds amazing.

Last year, one of my big topics of interest was prison reform, and I did a ton of reading in that area. That’s probably the deepest dive I’ve taken into a non-grad-school or non-work-necessitated subject in a long time, and it’s still something I’m exploring.

I also earned my second-degree black belt in tae kwon do, which was great. And then I promptly proceeded to stop going to class when grad school kicked my butt two semesters in a row. Which is why the goal above is to get back to it – again.

Chris has been in the middle of a HUGE, HARD transition at work. He has been the sports editor for LNP (a regional media organization) for several years, and this summer he was named the deputy opinion editor. It’s been a long transition and it involved him working something like 24 days out of 30 or something crazy like that, so he has not had time to put together a full list, but when he does, I’ll add it here. I know that he and Ashar are still planning to do a model train setup in our basement, which should be awesome!