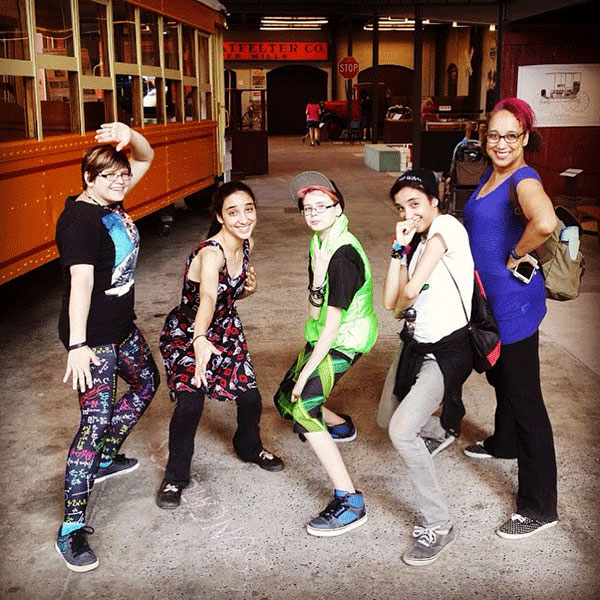 With other amazing humans at the Agricultural and Industrial Museum during Yorkfest. We need more of these kind of people in our lives.

It’s been quite a while since I’ve updated here, and a ton has been going on. (Don’t forget you can always get up-to-the-minute, or at least up-to-the-week, updates on Facebook.)

Disclosure: This post has some affiliate links. I only link to things we legitimately use and recommend, so if you see such a link, it's because we really do believe in the book or item!
In big news, Ashar, Kaitlyn and I leave this weekend for a two-week road trip to Phoenix, Arizona, where we’re excited to be part of the Free to Be Unschooling Conference. I’ll do a separate roundup of our trip (as well as the aforementioned Facebook updates) but I wanted to be sure to round up some of the great projects we’ve been doing before then!

Spike, the tobacco hornworm, is seen before being beset with wasp eggs.

One project I don’t think I otherwise mentioned: Ashar wanted to make homemade orange/lemonade, complete with fancy straws and glasses, so we did. Tasted great, and was a fun experience too!

He’s just a Poe boy, from a Poe family. (At the National Portrait Gallery in Washington, D.C.)

This update comes from Unschool Dad Extraordinaire Chris, who comes home from work after midnight each night and has “book time” with Sarah. This night-owl homeschooling has always been great for us, but their current project has just been so amazing that I asked Chris to sum it up. He says:

Ashar and I have been reading 2011’s Maphead: Charting the Wide, Weird World of Geography Wonks, written by former Jeopardy! champion Ken Jennings, for the past six or seven weeks.

We’re about three-quarters of the way through the book and have been greatly enjoying it. In a broad look at maps and the people who love them, Jennings touches on historic maps, the Library of Congress cartographic archives, imaginary maps, “road geeks,” the National Geographic Bee, map collectors and much more.

We’re learning a lot and the book has given us a springboard to a lot of tangental topics or other multimedia learning.

Just a sampling of the things we’ve learned and discovered:

And that really just touches the surface of all the facts, discussions and further learning that has been launched via Maphead.

No, YOUR alpaca is getting ready to drop his latest hip-hop album.

He’s the hottest new rapper on the East Coast. He and his homie S.O. Fresh (real name: Ashar Otto) have been dropping beats and scratching records together in the barn for years.

Their latest single, “Halter Hater,” has rocketed to the top of the Agricultural Alternative charts. They just launched their own clothing line, HuacayaWear.

So if you haven’t already, don’t forget to check out their debut album, Cria-tion, and catch up with them at the club later!

You haven’t lived until you’ve sewed boxers into another pair of shorts with a tail-hole cut into them. I’m just saying.

Other places, projects and odds and ends

Ashar designed this herself and made it into a bookmark for Arnold Schwarzenegger’s autobiography, Total Recall.

2 thoughts on “Unschooling: Our August and September 2015 adventures”