So let’s see… in our October 2016 unschooling adventures, we wrapped up our trip home from the Free to Be Unschooling Conference in Phoenix, AZ, took a day trip with a giant penguin, finished some books, spent time “panicking” at a local baseball stadium, and dealt with an unexpected trip back to Arizona.

Curious? Wondering whether I can explain all that up in one post? You bet, and I’ll also hit some of the book, movie and game highlights from our month. 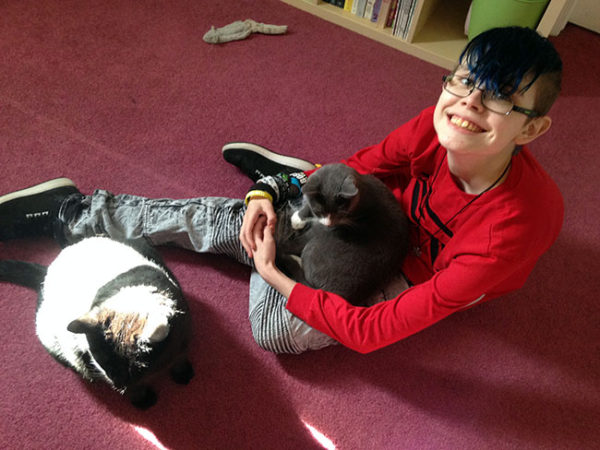 Ashar gives Mr. Angelino, our littlest cat, some lap time while Mr. Bill, NOT the littlest anything, enjoys some sun.

Taking a giant penguin on a road trip, aka the Hooger-Ride

I have to start with this, because it’s the thing I can pretty much guarantee no other family did this month.

So we have this giant stuffed penguin named Hoogerheide. Those of you who follow our adventures on social media probably know that we often take our stuffed animals places. But this guy… he doesn’t get out much. Mostly because he literally can’t fit in our Honda Civics if we have passengers.

(Aside: Why Hoogerheide? It’s a village in the Netherlands from which we’d received a PostCrossing postcard on the day of his arrival in our house.)

Solution! We rented a van and took “The Hoogs,” as he’s affectionately known, for a nice daylong drive around York and Lancaster counties, including taking him to an inclusive playground called Daniel’s Den outside of Mountville, Lancaster County. It even had a Hooger-sized swing, and we got to make some families at the park happy through our antics as well. 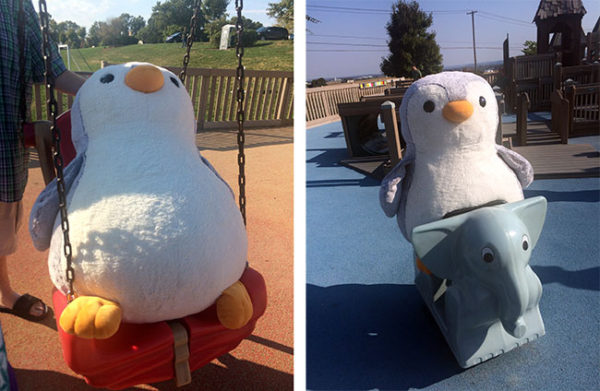 Hoogerheide the giant stuffed penguin was very pleased to find swings and an elephant ride his size at Daniel’s Den in Mountville, Lancaster County.

You can see a whole album of his adventures on my personal Facebook, titled Hoogerheide’s Big Day.

We have been running a semi-stealth Stuffed Penguin Giveaway Campaign under the name Pengins For Everyone. We’ve given away something like 70 already and we’re already stocking up on ones to give away through causes like Toys for Tots and the Salvation Army Angel Tree program this Christmas.

If you or someone you know needs a pengin, check out the Pengins for Everyone website. We’d love to get more of them into loving hands! 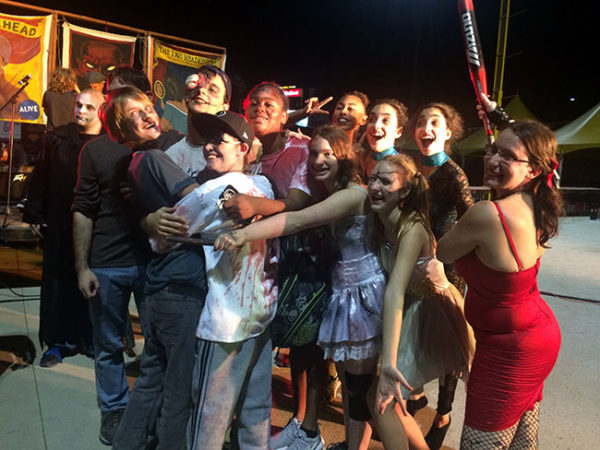 Much of the Panic at the Ballpark cast. The dude with the baseball coming out of his head is the center of the story, and the twins you see at right are friends of Ashar’s who served as “tour guides” for the attraction.

Panic at the Ballpark

This month’s other “big event” was kind of a last-minute surprise. Ashar decided to take part as a cast member at Panic at the Ballpark. This was a combination live theater experience/scare park at our local Atlantic League baseball stadium, and some of her friends on the cast mentioned a need for some more performers, so… 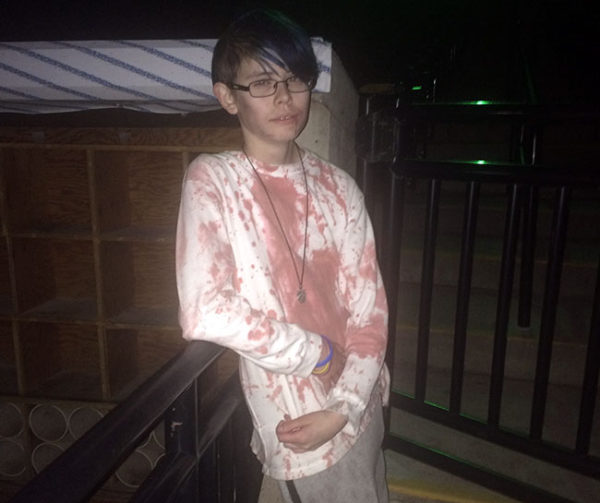 CJ Logan, undead shortstop, as portrayed by Sarah. Among the coolest parts of her role was that she got to hang out in the dugout and the locker room!

This was an amazing experience for Sarah. It was unpaid, but it had the responsibilities of both a theater role and a part-time job, and even better, she had a ton of fun. It was probably the happiest I’ve seen her in a long time, and I can’t say enough good things about the staff of Weary Arts Group, which created the event.

On a more serious note

So I mentioned a surprise trip back to Arizona in the introduction to this post. That didn’t include Ashar, only Kaitlyn and me, but it was a huge shock; we received a call on the morning of Oct. 11 that his 31-year-old brother had just suffered a massive heart attack and was flown by helicopter to a heart center about an hour away.

By that afternoon, we had Kaitlyn on a plane. Friday evening, I flew out to join him. 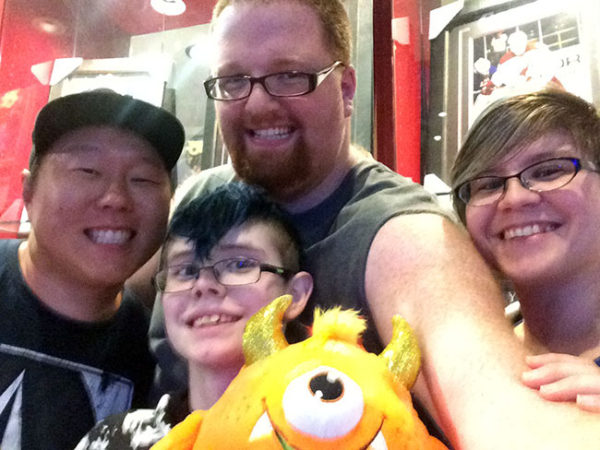 On our FIRST trip to Arizona this fall, we hung out with Kaitlyn’s brother Dave at Dave and Buster’s. (The orange monster is, appropriately, named Buster.) It was only about two weeks after this that we found out Dave had a massive heart attack and was in ICU.

Kaitlyn’s brother Dave is an amazing guy. After the better part of a week in the ICU, during which time he was on a heart pump, as well as a couple catheterizations, they’re still not quite sure the cause of this, but his doctors assure him it’s nothing he did wrong – he’s active, he eats pretty well – but there are a lot of unknowns in his medical history because he was adopted from a Korean orphanage when he was young.

I’m glad to say Dave is doing better now, though he was already back in the hospital once for a few days because of some continued heart trouble. He’s on a lot of medications and is eating a strict cardiac diet – low sodium, low cholesterol – which he’s adapted to by posting awesome Facebook photos of his and his mom’s cool creations.

In bad news, that heart center? Not in-network for Dave’s insurance. They’re fighting it, but at this point, he’s something like $150,000 in debt from his two hospital stays and related treatments.

His best friend started a GoFundMe page, and if you’d like to help, not only are your contributions there welcomed and greatly appreciated, but I can definitely say we also appreciate you helping by sending good thoughts for Dave and spreading the word about the GoFundMe campaign. 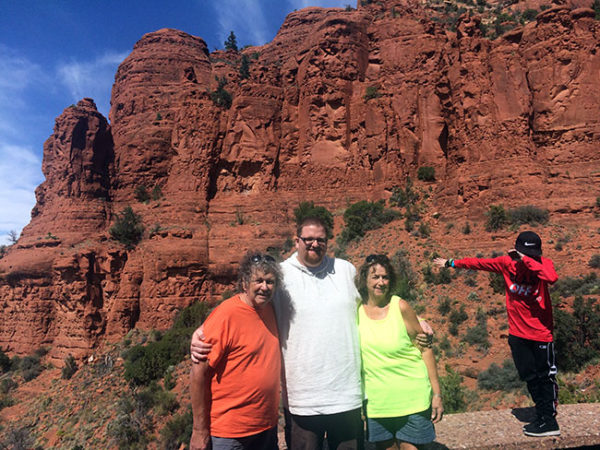 Kaitlyn and his parents, Paul and JoAnne, enjoy the red rocks near Sedona, Arizona, while Ashar dabs photogenically.

Back to happier, more unschooly stuff… Ashar finished two books while we were in Arizona – Double Cross: The True Story of the D-Day Spies, a solid nonfiction book, and Q-Space, a Star Trek: The Next Generation novel.

Disclosure: This post has some affiliate links. I only link to things we legitimately use and recommend, so if you see such a link, it's because we really do believe in the book or item!
Together, we’d started reading a biography on Lionel Messi, but we decided to abandon it, because it was pretty awful. So instead, we started reading We Don’t Need Roads, a look at the making of the Back to the Future trilogy. We haven’t gotten very far yet, but so far it’s leaps and bounds ahead of the Messi book!

Ashar and Chris also read a bunch of Edgar Allen Poe poems and short stories together, including Annabelle Lee, The Bells and The Tell-Tale Heart, to get in a Halloween mood, and Ashar picked up some comics, including Gwenpool #1. 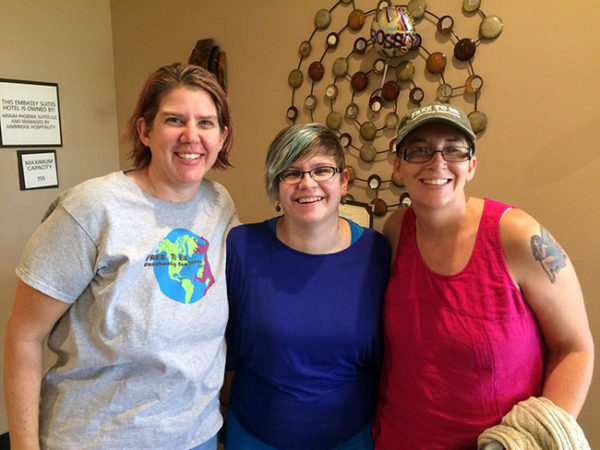 This is my squad – Rachel and Heather, unschooling moms extraordinaire and, even better, some awesome ladyfriends. 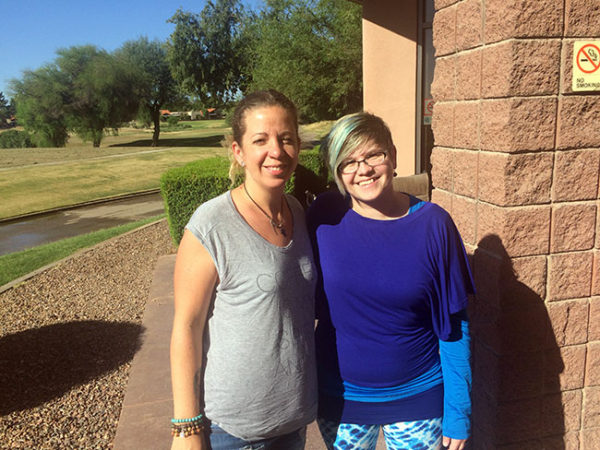 This lady is my hero. Jen McGrail, who blogs at The Path Less Taken, is the organizer of the Free to Be Unschooling Conference, a great friend and an all-around tough, awesome, amazing woman.

We continue our Wednesday night family game nights, and this month’s selections included Rummikub, a longtime favorite, as well as Zombie Road Trip and Munchkin, both of which were new to us and both of which involved a good amount of math.

Ashar and I have also been challenging each other at QuizUp, and she’s been playing a lot of MLB 16: The Show, which she got as a birthday gift at her 16 1/2th birthday party in Arizona.

Road-trip podcasting: While Ashar and Chris were on the drive to his mom’s house (about an hour and a half away), they listed to an episode of NPR’s Invisibilia podcast called How to Become Batman. Ashar found it very interesting, Chris said. It’s about a man named Daniel Kish, and as Chris described it, on the surface, it’s about blind people being able to “see” and do most anything they want. … But it’s really about how people tend to live up (or down) to the expectations that people and society place on them. Super-cool conversations there! (And I highly recommend Invisibilia in general; it’s a great show.) 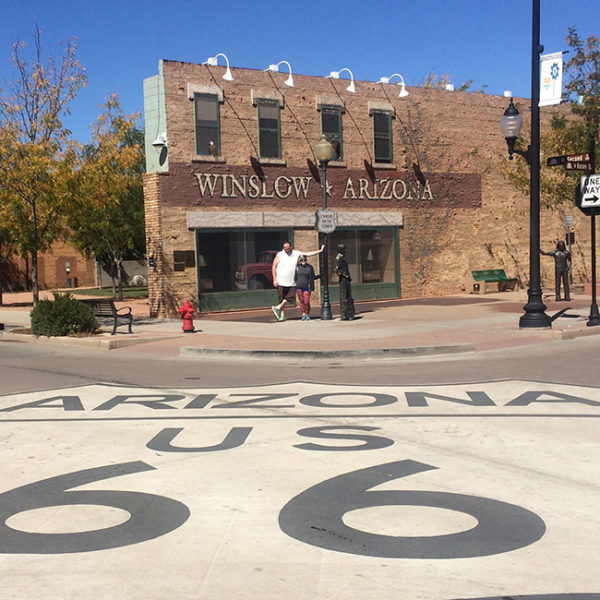 I’m standin’ on the corner in Winslow, Arizona… (Sing along! You know you want to!)

Sight-seeing in Arizona: We saw the Grand Canyon, went to some artsy places in Sedona, visited Petrified Forest National Park in the Painted Desert, saw the cliff dwellings in Walnut Canyon and a bunch more. We also did the Standin’ on the Corner in Winslow, Arizona thing, AND we went to the new OdySea Aquarium, which was amazing. I should write a whole post on these “family field trip” destinations… maybe someday when I have that weird thing, what’s it called, free time? 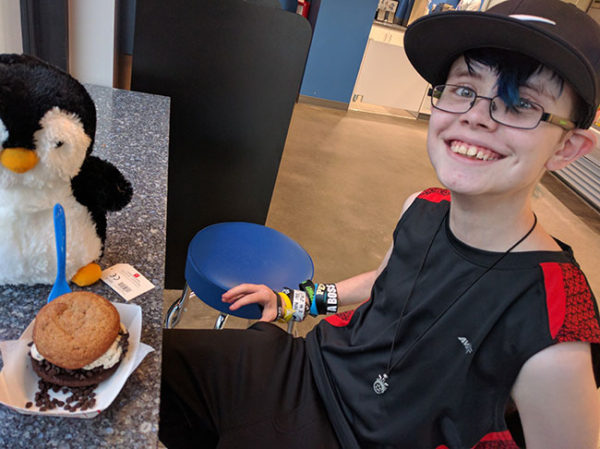 So one of the coolest things about the OdySea aquarium was this make-your-own-ice-cream-sandwich shop. LOOK AT HER FACE. So much ice cream. So much cookie. (Yes, that was dinner.)

Postal fun: Ashar wrote a Halloween postcard to her Taiwanese pen pal, Christina, and sorted some of her large stamp collection with Chris. The conversations we have related to stamps are super-fun!

STEM Sisters: The local science museum where we’re members has a program called STEM Sisters, in which girls in middle and high school get to hang out with women who work in science and technology fields. We went to the “Discovery Dinner” in October, and are scheduled to go to a pretty cool career day in November that I can’t wait to report on. And it’s all free for the girls, which is amazing.