Our family has always loved classic horror movies. You know the type – Frankenstein, the Wolf Man, Dracula, and all their incarnations. And when Ashar was 9 years old, she and her dad watched The Last Man on Earth starring legend Vincent Price.

Since then, we’ve not only seen many Vincent Price films; we’ve also listened to some of his radio work and explored his other passion of art.

That’s why we chose to write about this horror hero for what would have been his 105th birthday in 2016 as part of the iHomeschool Network’s celebration of May birthdays. 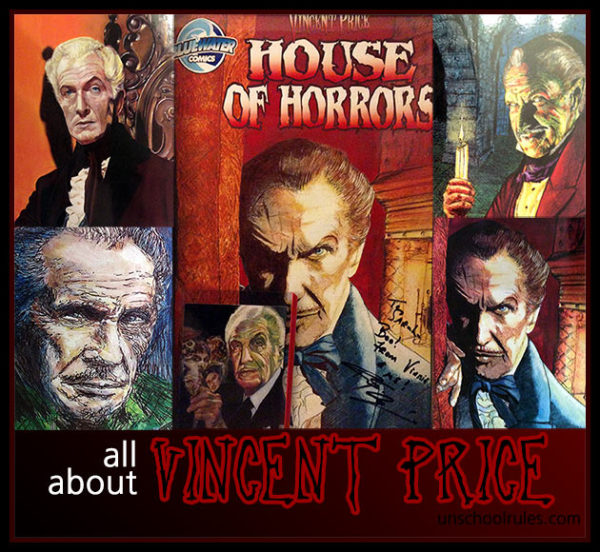 All about Vincent Price

After spending his childhood in that state, he went to Yale University, where he graduated with a degree in art history. That love of art followed Price throughout his life; he went on to write books on the subject and to lecture on it, and even founded an art museum in California!

Price was first a stage actor; he discovered acting after going to the University of London, where he had intended to get a master’s degree in the fine arts. After doing some theater work, he started acting in movies in the late 1930s and throughout the 1940s as a character actor.

Disclosure: This post has some affiliate links. I only link to things we legitimately use and recommend, so if you see such a link, it's because we really do believe in the book or item!
His first work in a horror film was one called Tower of London in 1939, which was a Boris Karloff movie, and he also worked in radio for some time, most notably in a series show called The Saint, where he portrayed the title character of Simon Templar; that show aired from 1947 to 1951.

It was in the 1950s that Price became most known for his horror work. He starred in House of Wax in 1953 and House on Haunted Hill in 1959, among many others. In the 1960s, he worked with filmmaker Roger Corman to make adaptations of several Edgar Allen Poe works as movies, including The Raven, The Pit and the Pendulum, The Fall of the House of Usher and more.

In 1964, Price starred in the aforementioned Last Man on Earth, and then went on to play the character of Egghead in the original Batman TV series! In the 1970s, he appeared on an episode of The Muppet Show, guest-starred on The Brady Bunch, acted in a one-man stage play and more. And in the 1980s, he served as the narrator in Michael Jackson’s “Thriller.” (That’s probably the first place I heard his now-famous voice!) He’d previously done voice work for an Alice Cooper album as well, and later did voiceover for the band Deep Purple.

His last major film role came in the 1990 movie Edward Scissorhands, where he starred as the inventor.

In addition to his work in film and art, Price was a well-known gourmet cook. He wrote a cookbook with his second wife and hosted a TV show called Cooking Pricewise. He also worked as an art consultant for the Sears department store chain, trying to get art in the hands of the general public.

Unfortunately, Price was a lifelong smoker who suffered from emphysema for many years, eventually dying of lung cancer on October 25, 1993.

Back when Ashar was still in public school, they were assigned to pick a famous person they admired and write a short essay with facts about that person.

Guess who she chose? 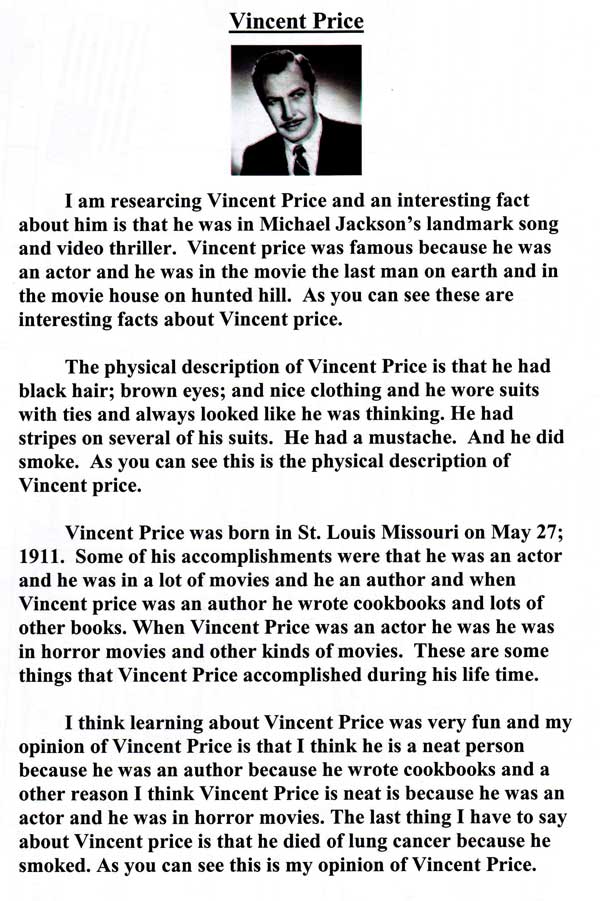 Books by and about Vincent Price

And thanks for stopping by to help me wish Vincent Price a happy birthday!

3 thoughts on “Celebrating the legend of Vincent Price”