It’s been a particularly hectic week around here… and not looking to slow down any time soon!

This week, Chris and I are celebrating our seventh wedding anniversary with an out-of-town trip on Wednesday, Thursday and Friday.

When we come back, we’re headed to a demolition derby with our best friends and a large group of other friends.

My father-in-law comes to visit… then my brother comes from Arizona… then my uncle comes from eastern Pennsylvania… and amidst all that, we officially “wrap up” what would be Ashar’s sixth-grade year if she were in public school!

So what have we been doing?

1. Ah, Sculpey clay. This has been a passion of Ashar’s since earlier this year in public school, and she decided not too long ago that she wanted to make a baby dragon.

She wasn’t sure at first how to go about it – but then she realized that, on her fairy-tale bookends, there is a sculpted dragon hatching from an egg! Winner!

She did all of this herself – I just had to help her shape the egg around the dragon. 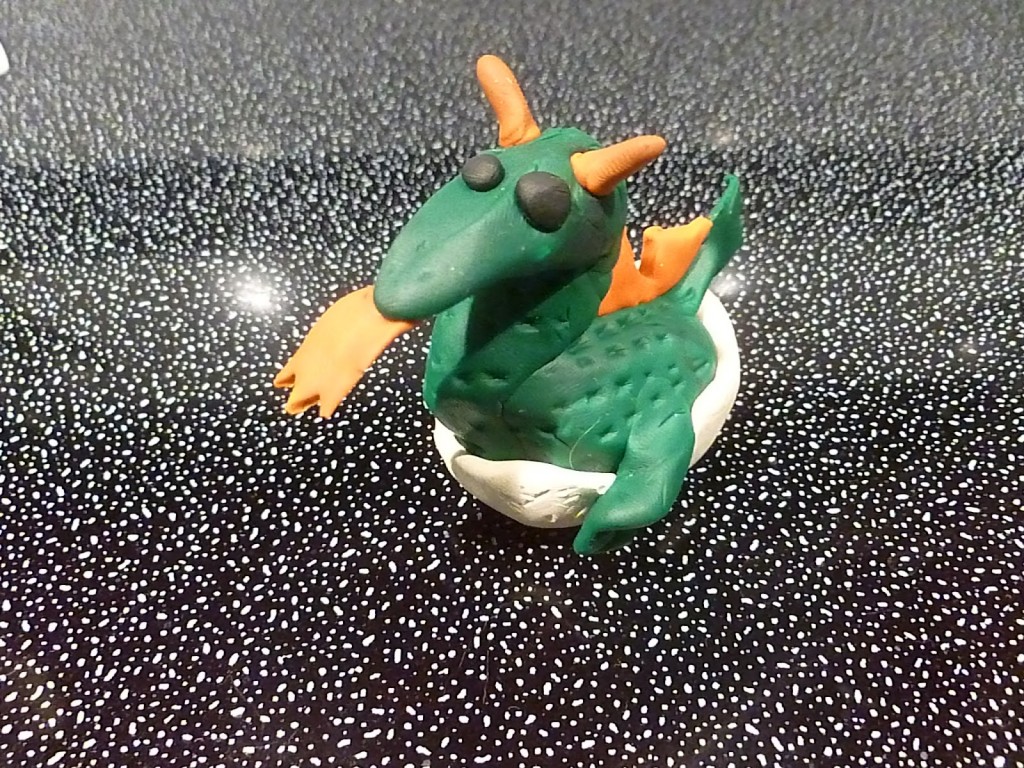 2. Ashar is spending today with a homeschooling friend at Black Rock Retreat’s Outdoor Education Day. It’s likely raining there, like it is here, and they’re going canoeing to see what birds they can spot from the water.

But she’s with her friend Paige from 4-H (and Paige’s grandpa), and hopefully the weather won’t spoil their fun!

3. I’ve been busy putting our portfolio together for our upcoming meeting with our evaluator on May 29. I’m pretty impressed, actually.

First, I’m impressed at all Ashar’s done and learned – to be fair, that includes both IN public school as well as since beginning our homeschooling journey.

Second, I’m impressed with myself! I kept good records, I have the appropriate amount of documentation – what’s required, but not too much – across a variety of subject areas, and I’m not waiting until the last minute to pull it together!

4. Ashar decided – completely out of the blue the other night – that she wanted to wash my car and my mom’s. So she got a bucket, a little bit of soap and some old washcloths and did just that! 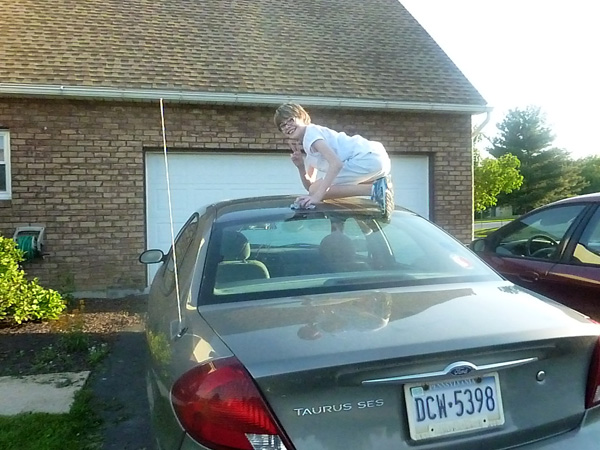 She’s nothing if not thorough… she even figured out how to get up and wash the roof! I followed up by washing the windows and vacuuming the insides, so now we have two nice cars, as close to being detailed as they’ll probably ever come!

5. We sorted some more of Ashar’s postcard collection this week, as part of a massive house-reorganization project. Ashar used to have both a bedroom and a “playroom” upstairs (the playroom being kind of a landing outside her room and ours), and my scrapbooking stuff and my mom’s sewing stuff used to be in our finished basement.

But Ashar’s craft supplies and collections were also in the basement.

So we consolidated… she now has ownership of a full-out “rec room” in our basement (our family room, where our washer and dryer are, complete with couch), and that’s where all her stuffed animals, her desks, her Matchbox cars, her blocks, her art stuff, her building supplies, all of that is.

She and her friends from the neighborhood spend an awful lot of time hanging out down there anyway, so it seemed to make sense to move all her things there.

And the added bonus is that my mom’s sewing projects and my scrapbooking supplies now have a very easy-to-get-to spot near our bedrooms, giving us more space and more motivation (and more sunlight!) for our hobbies.

As part of doing this, though, Ashar decided she wanted to sort out her large postcard collection a bit more. 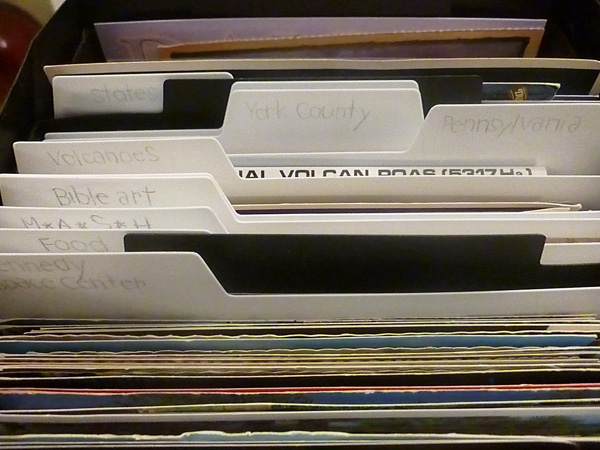 My best guess is that she has more than 1,500 postcards from all time periods and all around the world. She loves to get them out and look through them, and has learned a lot by exploring the places pictured!

Chris has a hard time helping her sort. I must think eclectically like Ashar does, though, because I can look at a postcard of a man holding a kookaburra in the middle of a crowded city and tell you right where it goes.

Well, it’s “Ireland and Australia,” of course. Because kookaburras and the kingfisher bird family, which are basically Ashar’s favorite animals ever, are found in Australia, making it her favorite place ever.

You just have to “get” how she thinks. Then you can help sort the cards. I think it’s kind of fun.

6. Our cowboys and Indians took a walk the other day with us to the former golf course near our house. Ashar wanted to set them up for a nature photo shoot – and we’d just read about Omri, the main character in the book “The Indian in the Cupboard,” taking his cowboy and Indian outside! 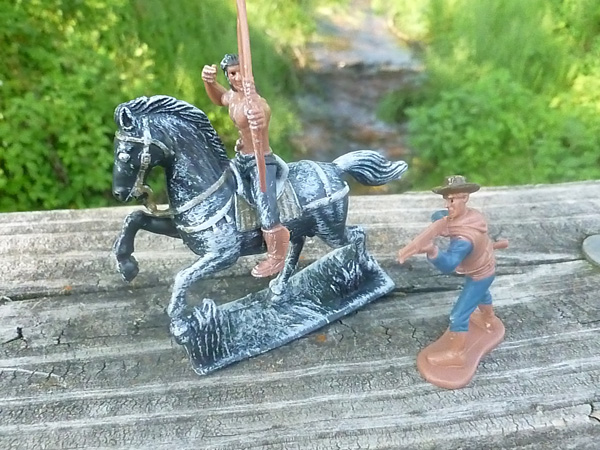 Apparently they didn’t mind standing on the edge of their equivalent of the Grand Canyon for a photo. And Ashar certainly didn’t mind making up stories about what they were doing!

7. Speaking of the golf course, Chris found us some new friends there. 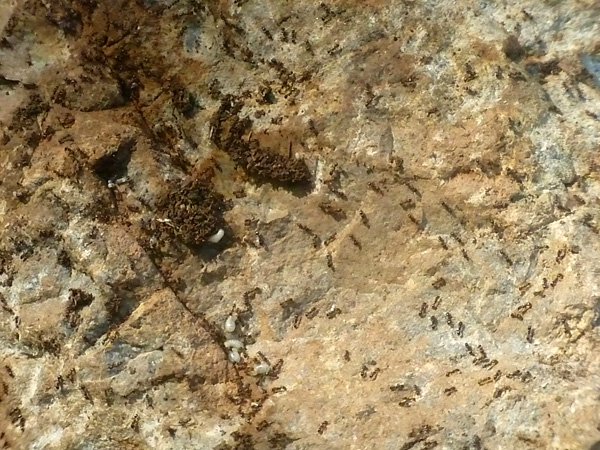 We stood and watched this ant colony (which was previously under a rock, before Chris, uh, disturbed them) for quite a while. These guys were hustling! We weren’t sure at first if they were transporting their own egg sacs or some yummy grub food, but we’re pretty sure they were eating grubs/larvae. Yum yum yum?

So that’s a look at seven snippets from our unschooling life in the last week. What’s going on in your world?

6 thoughts on “Washing the car, rearranging the house, time with friends, more Indians: Snippets from unschooling this week”