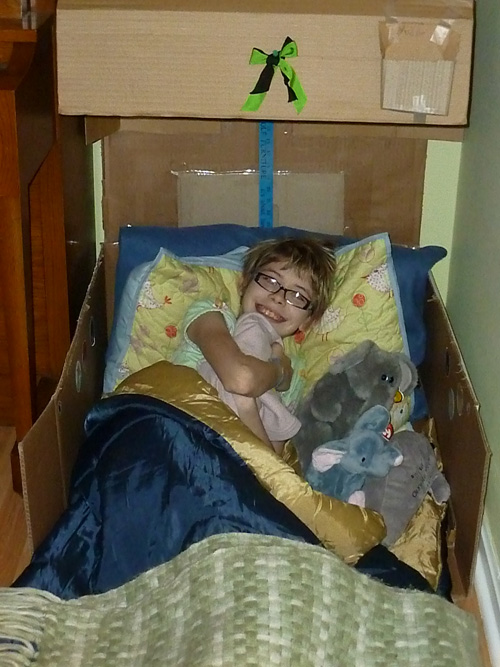 It’s been a week since I posted – I’m a terrible Blog Mommy, huh? 🙂

Since then, we’ve been hiding out all over the place – and more details on our adventures, which included Vincent Van Gogh, Rocky, an antique store, a live bear, a walking robot and more, will be forthcoming – but in the meantime, I thought I’d show you where some of us have literally been hiding out.

It all starts when I decided that, since I’m working from home almost all the time now, I might really want to consider a new office chair. Off we went to the Office Max sale a few weeks ago, and home came a new chair, a thing of wonder, beauty and fewer trips to the chiropractor.

It came in a large box, with some assembly required. Ashar scoped out the box, decided the wanted to keep it for “a project,” and carted it to her basement workshop.

Last weekend, it returned upstairs. Ashar showed us that she could get INSIDE the box (which was almost frightening, to be honest), and then she said she wanted to turn it into a hideout.

Well, leave it to Mom – I decided it might be a bit more comfortable if we raised the roof. So we used a box-cutter (I helped with this part) and slit along both edges of the larger, flat side. Effectively, that left us with a base and two short sides, plus a tall “back” with a flap that hangs down a bit in the front.

We braced the back with Ashar’s yardstick (the blue stick up the center) and used painter’s tape to help affix the box to the wall. You can’t see it too well, but it’s wedged between my piano and the wall in the dining room, and after decorating it with stickers, a bow, and a mailbox that we were all instructed we needed to deliver messages to, a hideout was born.

It wasn’t long before Ashar realized that a blanket would pad it out a bit. She pulled our green afghan in and sat and played with her stuffed animals and her 3DS. 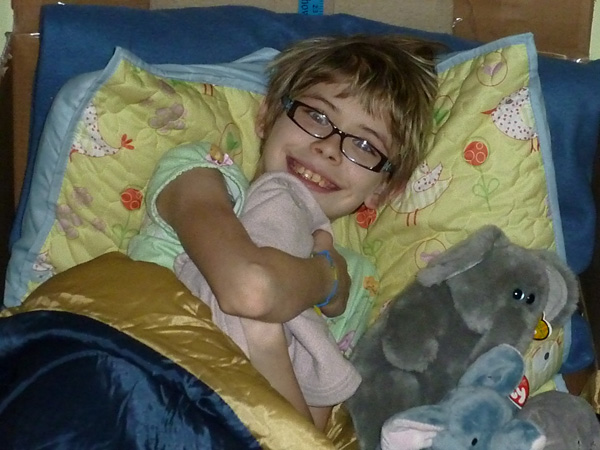 Well, you know what that turned into. “Mom, I can sleep here! I can sleep in my hideout!” That was big for Ashar, who really doesn’t like to sleep anywhere different, and the first night, she got all settled, then decided she’d rather go up to bed after all.

But the following two nights, she got over the initial weirdness and decided she LIKED her new abode. 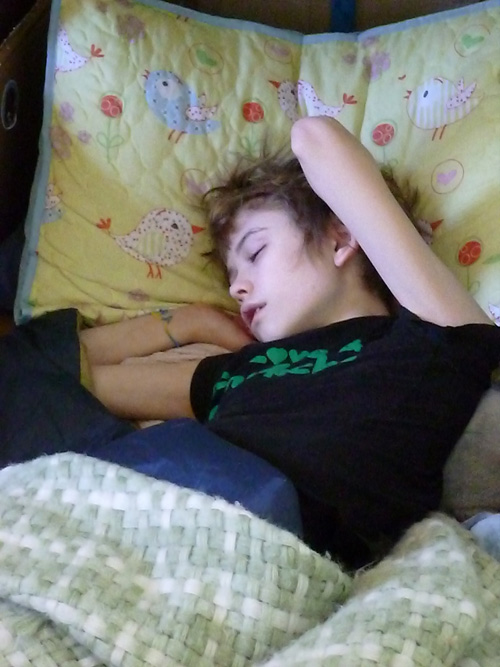 Yep, my kid sleeps in a box in the corner of the dining room. What of it? 🙂

2 thoughts on “Where have we been hiding out?”