In case it isn’t pretty obvious from reading about our day-to-day learning activities, we’re pretty firmly in the “unschooling” spectrum of homeschooling.

That could mean any number of things – but to us, it means we are intentional about learning in everyday life, but we choose not to follow a curriculum, give tests or grades, or require things like essays.

The thing is, people maybe wonder what we, you know, do all day, what with no required textbook reading or worksheets or memory work. And as we near our first meeting with Ashar’s evaluator and start putting together our portfolio, I’ve had some questions from friends and family members – as well as strangers – along the lines of, “But how can you tell she’s learning?”

To that, I usually just smile. The answer is pretty simple – I talk to my daughter. And I take pictures. Lots of pictures. When you see them, I think it’s pretty obvious that not only is she learning, she’s retaining – and she’s having fun.

So with that in mind, here’s a look at 7 “snippets” from our unschooling life in the past week or so, part of a linkup by the awesome Carma at Winging It.

1. Almost a year ago, we had one desktop computer shared between all our family members, and when it died, we replaced it with a fairly inexpensive laptop. That’s mostly used by Chris, as Ashar has her own netbook (a Christmas present), my mom has an iPad, and I have my work laptop that I do almost everything on.

I put the desktop tower in the trunk of the car, intending to probably drop it off at my friend’s repair shop and see if he wanted it for parts… or run a magnet over it to erase it… or, well, something.

This week, I had it. It’d been in the trunk since AT LEAST Christmastime, maybe earlier. So I said to Chris, “Do you think Ashar would want to take it apart and see what’s inside?” 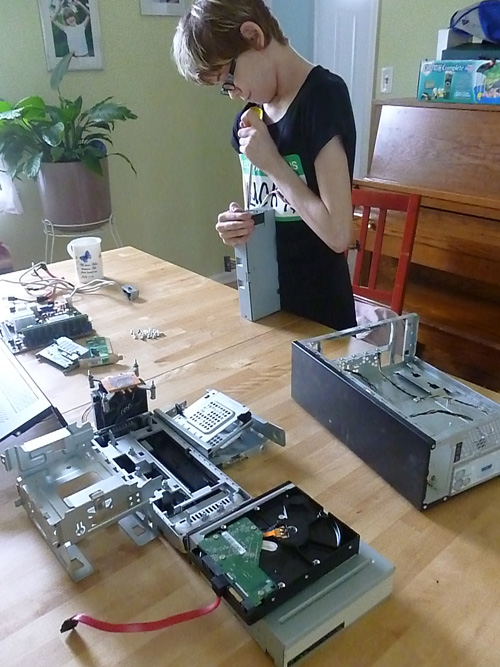 She did – and she loved it. We tore it apart together, and talked all about circuit boards, resistors, the hard drive, the power source and more. She’s saved all the pieces and intends to use them to build a real working robot with my brother, an engineering genius, when he comes to visit this summer. Is it likely they’ll end up with a “real working robot”? Well, uh, no, but I’m sure not telling her that. She’s excited about trying to figure it out, and even if it’s just a model of a robot made from computer parts, well, that’s pretty cool too.

2. With that “mechanical” mood going on, Ashar decided she wanted to build her tin-can robot from the kit we’d bought several weeks earlier. (We’d just found the perfect can the day before at a local antique store; we didn’t just want any can.

Check out the robot, creatively (?) named Royal Crown, in action.

3. My sister Linda and brother-in-law Mike took Ashar with them to our local Atlantic League baseball team’s game Saturday night – and Ashar loved it. We’ve gone several times and are really lucky to have the stadium right in town. They were in the skybox for the newspaper company where Chris and I work, along with Linda! Linda was actually working an event – a promo for our women’s magazine – along with some other employees, and another woman brought her 10-year-old daughter and her daughter’s friend. Ashar enjoyed hanging out with them and making new friends! 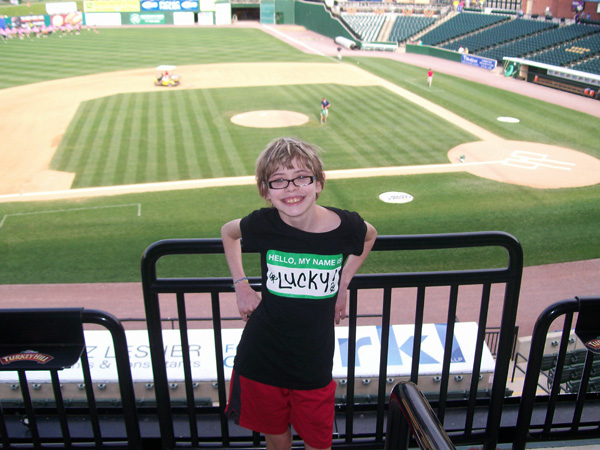 She also wore her “lucky” shirt to help the team, but alas, that didn’t work.

4. Another week, another trip to Kiwanis Lake, this time to see the ducklings and goslings that recently hatched, as well as to spy on the night herons and great egrets that roost there. If you’ve seen the movie The Aristocats… well, then, you’ll get why I title this picture “Think GOOSE!” 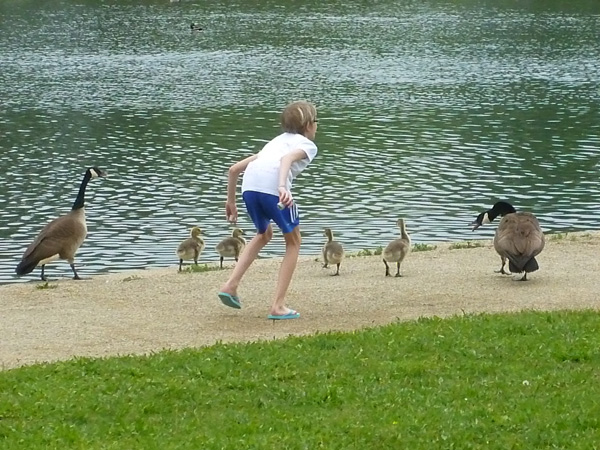 Ashar, by the way, got friendly enough with one overprotective set of goose parents to almost touch a gosling, which is pretty amazing. The ducklings were even cuter, in my opinion – they’re SO little – but Ashar liked this goose family best.

5. One random York County attraction is a combination miniature golf course/zoo/ice cream shop/basketball park in the eastern end of our town. I mean, doesn’t everyone play mini golf while staring at a live black bear, then feed a llama and shoot hoops before getting ice cream? 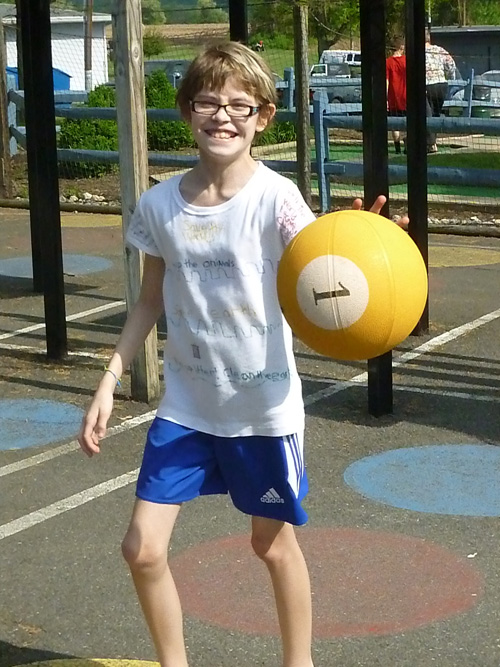 An interesting side note is that I truly believe Ashar gets much more exercise since she left public school. AND, she doesn’t freak out about having to wear a gym uniform that doesn’t fit her tiny waist, which was a social and sensory disaster. We were all burning calories this day! (And I learned I’m pretty awful at basketball.)

6. In some random linking action, we’ve been reading and enjoying a bunch of stuff online. I personally LOVED How Unschooling is Like Lunch on Everyday Snapshots. And as I was reading other sites in this unschooling linkup, I learned about MathMovesU from Eclectic Ramblings. MathMovesU is designed for approximately middle-schoolers and shows how you use math in everyday life. It’s FREE – and it’s made by Raytheon, the defense contractor for which my brother, David, works. (Which totally upped its cred in Ashar’s world; this is the guy who’s coming from Tucson to supposedly help fuel her robot dreams.) Even math-hating Ashar spent about 45 minutes on it, which was pretty stellar. And Ashar’s recycled Stegosaurus was featured on the Makedo blog!! THAT was super-amazing-awesome-exciting-etc. for my fame-loving girl.

7. This is an “online find” that gets a special shout-out because Ashar completely discovered it and acted on it herself. She loves Squinkies – and if you don’t have the, er, good fortune to know what they are, you can conveniently see photos on her blog. She searched for “house for Squinkies” and found this one based from an Altoids tin. At the time, we had no Altoids, so Ashar improvised, and COMPLETELY without any assistance came up with this: 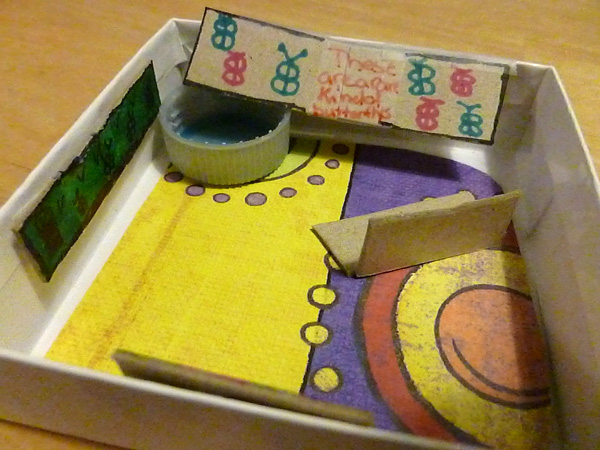 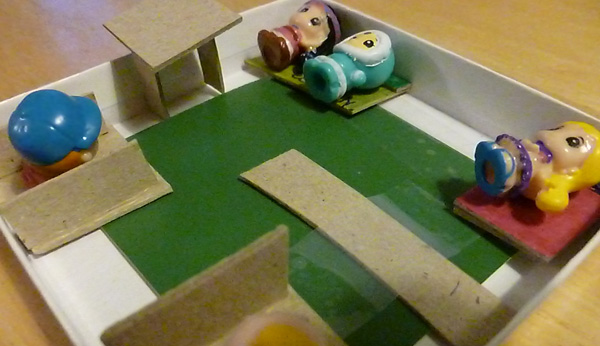 Underneath the parents on the queen-sized bed, the “bedspread” says WE ARE AN ECO FAMILY, because Ashar built their house all from recycled materials, like a former jewelry box, old cardboard scraps, odds and ends of scrapbooking paper, bottle caps and more.

In the top picture, looking out the window, the family can see trees (the green). On TV, they’re watching a program about rare butterflies, probably on the National Geographic Channel.

We have, by the way, since acquired an Altoids tin, thanks to my brother-in-law John in New Jersey, who we saw when we went with my sister Carol to the Philadelphia Museum of Art (more on that in another post). So, I’m sure the Squinkies will continue to expand their recycled abodes.

So that’s a look at seven snippets from our unschooling life in the last week. I’m so excited… it’s really sinking in to me now that we’ve almost finished what would be Ashar’s sixth-grade year if she were still in public school, and she’s made such progress since the start of the year. That’s exciting… and I can’t wait to keep rolling right into our next set of experiences!

10 thoughts on “Computers, robots, geese, sports and Squinkies: Snippets from unschooling this week”