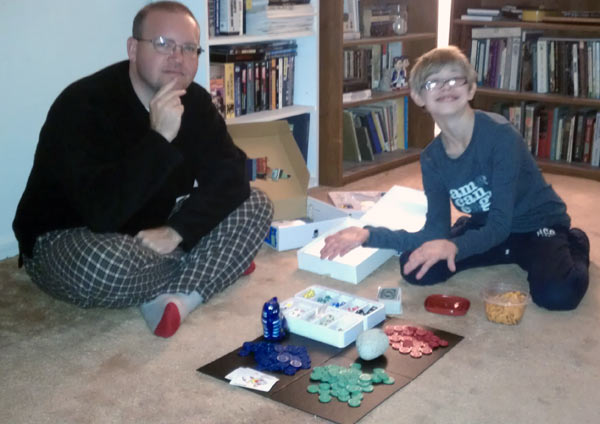 It kind of goes with the whole “unschool” thing – we don’t always play by the rules, we like to be creative, and we’re more concerned with having a good time and working together than with who wins by an arbitrary standard!

So when Chris got out the Sequence and Dicecapades games, dumped out the various pieces and flipped the Sequence board over, we got creative. 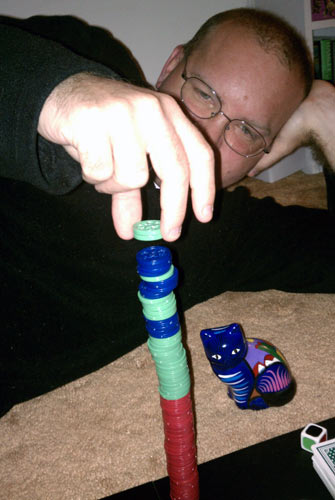 This game included everything from cards to letter, number and color dice to colored tokens to Lego people to a gigantic rock to a random ceramic cat (acquired on our honeymoon in Mexico, as it happens.)

There was no “win” or “lose” objective. We simply played, making up rules for what to do under certain circumstances, inventing as we went until we got tired.

At one point, we started making towers, which is what Chris and the Lucky Cat are doing above. 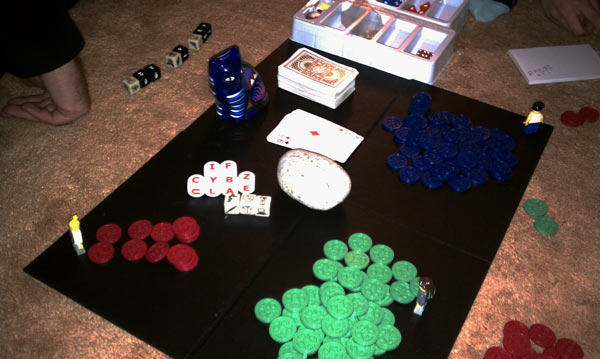 When we started, the general flow of the game was that we each picked a color of token (represented by our favorite Lego person in our corner), and on our turn, we flipped over a card. The color of the card determined what to do next – if it was a black card, you took the six black dice, rolled them, and added all the numbers. You could then steal that many chips from another player.

Red cards, meanwhile, led to “multiplication war.” You took two red dice, and challenged another player to take two red dice. You rolled your pair, multiplied the two faces, and whoever had the higher product got to take chips from the other. (The number was based on the card you’d originally flipped over, since taking 56 chips was out!) 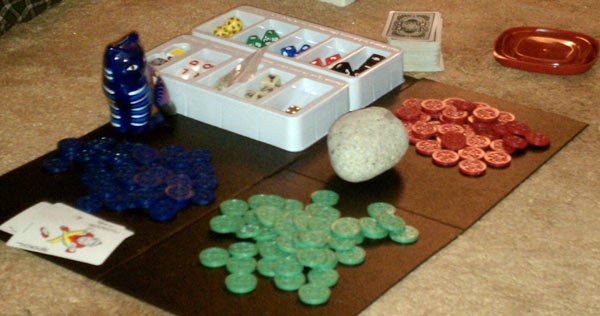 And finally, if you drew a face card, you got to roll the picture, letter and color dice and make up something about them. (We were making “number sentences,” like “I have 8 cats and 6 unicycles in my 5 broom closets” – yes, the picture dice have a broom, a cat and a unicycle, among other symbols!) And sometimes, we simply tried to make a word from the letter dice!

We also exhibited some gaming generosity; Ashar got the idea to give BACK the number of tokens she should have taken when she got more of ours than we had of hers.

Let me be clear on one last thing: Sarah decided these were the things we should do. My “math-hating,” “yuck to anything that looks educational” child made a math game with language adaptations with zero prompting from us.

9 thoughts on “A family-created game”