Well, the funny thing is, when we started writing this month’s “birthday celebration” post about Abner Doubleday, Ashar chose him over some other notable people with June birthdays because I told her he’d invented baseball.

Let’s get this out of the way right now: Abner Doubleday didn’t invent baseball. Oops! See, Moms learn things, too!

So, in honor of the anniversary of Doubleday’s birth, as part of the iHomeschool Network’s celebration of June birthdays, instead Ashar and I have teamed up to tell you about what this Civil War general DID accomplish in his lifetime! 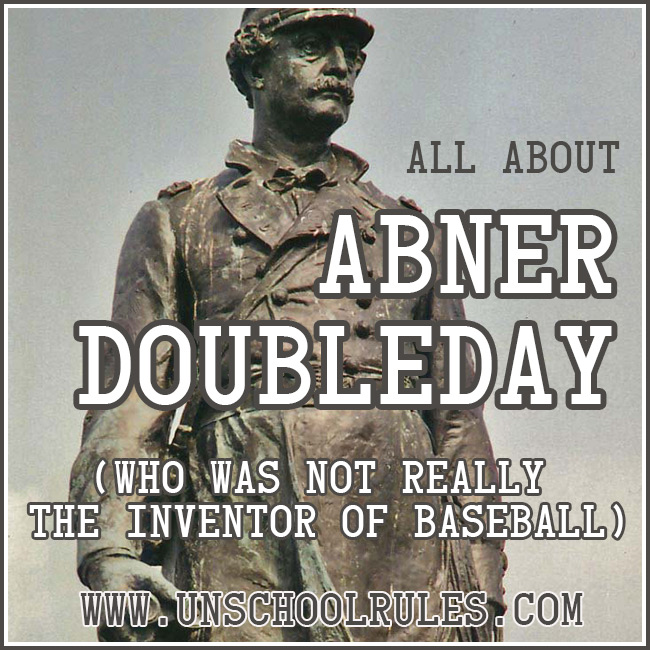 All about Abner Doubleday

Abner Doubleday was born June 26, 1819, in New York. He was the grandson of a Revolutionary War soldier and the son of a War of 1812 veteran, so it’s probably no surprise that he entered the U.S. Military Academy at West Point in 1838.

Disclosure: This post has some affiliate links. I only link to things we legitimately use and recommend, so if you see such a link, it's because we really do believe in the book or item!
The legends say that Doubleday invented the game of baseball in 1839. But… he was a West Point student at the time! Doubleday himself never claimed to have invented baseball, and his letters and diaries don’t even mention the game, nor does his 1893 obituary in the New York Times.

Anyway, after graduating from the Military Academy, Doubleday began his military career, and by the time the Civil War began in 1861, he was a captain and second in command in the garrison at Fort Sumter in South Carolina.

One thing Ashar and I liked learning about Doubleday was his tie to our area. In 1852, he married a woman named Mary Hewitt of Baltimore, which is just about an hour south of us, and during the Civil War, he was a major part of the Battle of Gettysburg, an 1863 battle that took place less than an hour to the west of our home in York County, Pennsylvania!

Doubleday had a tough task as a leader of a Union Army corps at the Battle of Gettysburg; he and his 9,500 men spent five hours battling 10 Confederate brigades numbering more than 16,000; despite Doubleday’s eventual (smart) decision to retreat into Gettysburg after hours of fighting, he and his forces held off and did serious damage to the Confederate troops.

After the Civil War, Doubleday continued his military service until 1873. Before he’d even entered the military, he worked for a couple of years as a surveyor and civil engineer, and after his service, he practiced as a lawyer, definitely an unusual combination of skills!

So what about the baseball thing?

Well, it turns out that history can be manipulated. (I know, you’re shocked!)

It started with a disagreement. Was baseball American, or was it a knockoff adaptation of the British game of Rounders? Well, as it turns out, some people really wanted to believe that it was American. So much so that they formed a group called the Mills Commission to ostensibly find out the truth, but mostly to back up what they already wanted to think.

When a mining engineer named Abner Graves claimed that Abner Doubleday had invented baseball and presented his “recollections” to that commission, well, they were pretty fond of it. (And there were other connections – the head of the Mills Commission, Albert Spalding, the president of the Chicago Cubs at that time, financially supported a group called the Theosophical Society, of which Doubleday was an officer.)

There’s some talk that there was a relative of THIS Abner Doubleday also named Abner Doubleday who might have gotten confused in Graves’ recollections, but since Graves was only 5 years old when baseball was created, it seems unlikely. This is one of those areas where the real history might be forever lost in misinformation, but one thing’s for sure – it’s almost impossible that it’s true that Abner Doubleday founded the game of baseball as we know it today.

But fundamentally, most of what happened was that a less-than-credible report came before a group that wanted to believe it, for its own purposes – come on, a decorated Civil War veteran creating the game? That would solve the “is it American?” argument once and for all, right? You can see how they wouldn’t be motivated to dig too deeply, unfortunately.

This YouTube video sums it up pretty well: Military? Check. Baseball? Not so much.

And thanks for stopping by to help me wish Abner Doubleday a happy birthday!