This post was dictated to me by Ashar about the way we spent our day – on a hunt for the Wild West, you could say!

I got interested in cowboys and Indians by the book “The Indian in the Cupboard.” I really like the book, and when we finish Book 1, I want to be able to read Book 2, where the Indian in the cupboard returns.

Last night when me and my mom were reading “The Indian in the Cupboard,” chapter 2, when we were done I jerked up and said “I want toy Indians and cowboys!” And so today, we went out and we found some, and I am very, very pleased.

We went out shopping for toy cowboys and Indians and we went to a lot of places. But some places we went to were Toys R Us, antique stores, and finally we found them at a hobby shop that also sold trains and an RMS Titanic model that I really wanted. But it cost a lot of money. 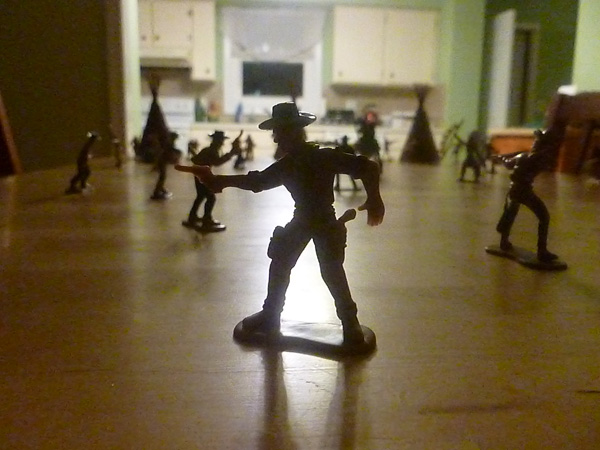 I got two bags of Indians and one bag of cowboys. My three favorite cowboys are my red cowboy that you see above, named John, and also one that I named Buffalo Bill (in a blue shirt) and in black, last but not least, Jedadiah. (Can you guess why I named him Jedadiah? You should put your guess why in the comments and I will tell you if you are right.) 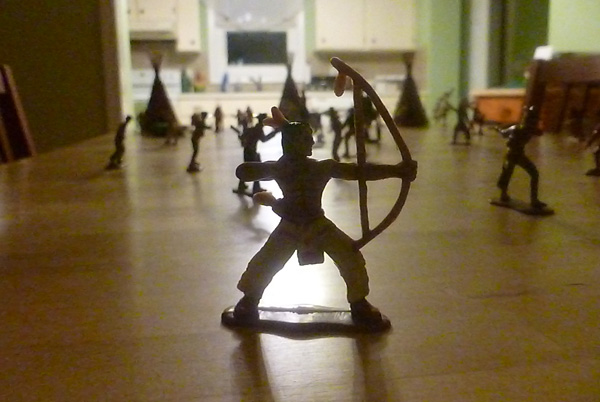 My three favorite Indians besides the one that I think is like the character from the book, which we will talk about later, are my chief, named after the famous chief Sitting Bull, then two hunters named Soaring Eagle (who is wearing yellow pants) and Running Deer (wearing blue pants). I guess Indians didn’t really wear shirts back then.

The chief has white eye makeup near his nose. He has white braids hanging from his headdress, and a fancy bow and a fancy rifle. He has a loincloth over his pants with a fancy design on it that I like. 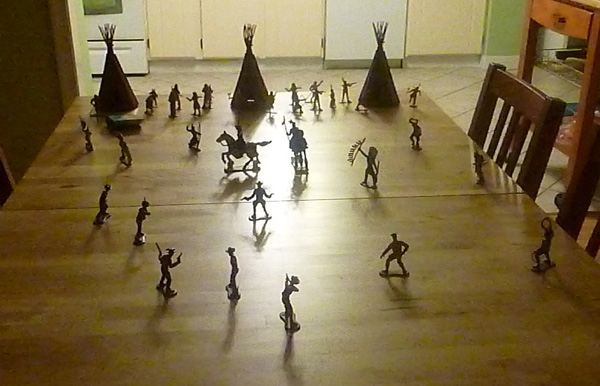 When we got home, I set all the figures and the tepees up on the table. I separated the cowboys on one side and the Indians on the other. Don’t put them together, bad idea. Then I took pictures in the “sunset.” Which was really light shining into the dining room when it was dark. 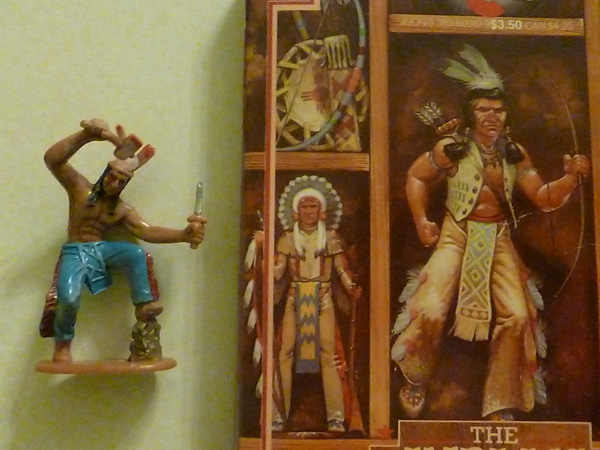 I like putting the cowboys and Indians that have the plastic piece across the bottom over my fingers and flipping them upside-down in a circle. If these came to life like Omri’s, I would be stabbed for doing that. And shot at, because the cowboys have guns. (Jedadiah has two guns, and he could easily shoot me and it might not hurt but I don’t think I’d like it even though it was only a little teeny tiny bullet.)

We will be reading more of the book tonight – in fact, right now! And I hope to tell you more about it!

3 thoughts on “Cowboys and Indians”