Though you wouldn’t believe it from the amount of time I spend on Facebook and Pinterest, I’m not a huge advocate of social networks. I enjoy those two personally, and I use Twitter and Google Plus as well, and I’m on all of those plus some other networks daily for my various jobs.

That said, while they’re a ton of fun and a huge boost to productivity and business relationships, I worry a lot because of things I see online. There are the “drama people” – you know the type – who post things like OMG IN TEARS *WHIMPER* and then 50 people ask them if they’re OK. (My advice: Save the drama for yo mama, folks.) That mostly borders on funny.

But I’ve seen relationships – friendships and even marriages – torn apart by things done and said via Facebook (and other social networks). While, granted, those relationships had much larger issues, of which the online drama was just a tiny piece, this has taught me a few lessons:

1. EVERYTHING is public. (As a side note – this is why I make no attempt to hide our identities on this blog; we are very much of the “if you think something’s private online, you’re deluding yourself” camp, and we’re OK with that.) But in a social-media sense, this means don’t post, Tweet, pin or plus anything you wouldn’t share with your pastor. (And I have several pastors as Facebook friends!)

2. Facebook and teenagers don’t mix. I do have several “friends” on Facebook who are younger family members, my daughter’s friends, members of groups we attend, etc. I can think of two people out of the two dozen or so I know that age who are without drama (either of their own creation or someone else’s), and the rest have had all sorts of issues, some incredibly scary and serious. Middle and high school are hard enough without that stress, and even if YOU at that age are old enough to be responsible, you can be seriously hurt by the many people who aren’t!

3. A lot of the “problems” with social media could be solved if people treated it more like a social situation. If you would not announce something about your underwear at a party with 30 guests, why on EARTH would you post it to 500 “friends”? (True story – saw that, and from someone who works as a social media coordinator for a large company!) If you wouldn’t say it to someone’s face, why post it or message it to them? And so on.

So all of this is a very LONG preface to the learning that’s been taking place in our house. We have been adamant so far that Ashar not create a Facebook profile. Among other things, Facebook’s terms of use say you have to be 13, and I really don’t want to encourage my kid to lie about her age, so that’s been enough to hold her off.

But she is a huge devotee of All That Is Google, and as part of writing her own blog via Blogger, she does have a Google profile, which we said she could build out into a Google Plus account. 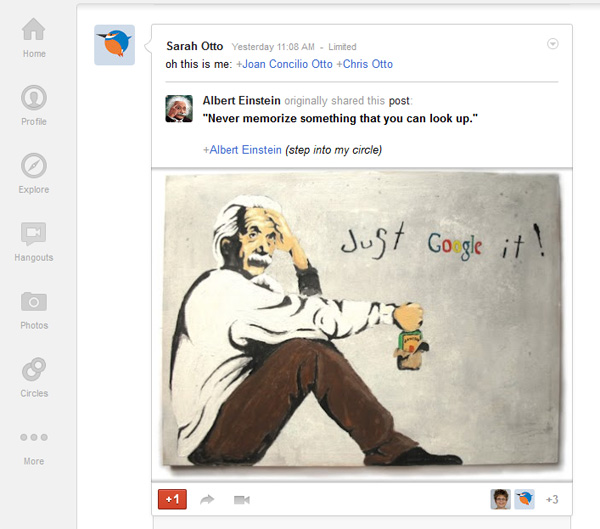 She LOVES it. She is on Google Plus all the stinkin’ time. She blows up my feed – as I don’t have a whole ton of friends who DO like to use G+! But she gets it. She has found who to put in her circles (Earth, Albert Einstein and Johnny Depp are among her favorites) and she goes happily about the Internet each day, “+1″ing her little heart out.

Her favorite thing to do is to +1 my blog posts or Chris’s, and then tell us that she’s helping us get traffic. She also figured out, entirely without any help, how to tag us in her posts, so she will share things that she thinks Chris or I will like and tag us. (She did that above – and she was really funny!)

We worried a bit when she learned how to start a “hangout” with video chat, but she was 100% OK with the idea that she only uses that to talk to our family members and some particular friends of ours who also use G+ and who I trust implicitly!

I’ve been on Pinterest since its beta, and I have to say, as much as Facebook is essential to big parts of my life, Pinterest is definitely my “network of choice.” I’m not very complex – I like pretty things and happy thoughts and positive people. For at least 90% of its content, that’s Pinterest.

So I’ve been pinning things like crazy, especially as we started planning our homeschooling/unschooling journey, and Ashar would sometimes sit down with me and find things for me to pin to my “Stuff for Sarah” board.

Once she had clearly mastered Google Plus, I started thinking: Hey, she could do Pinterest. I wouldn’t have a problem with that. So I “invited” her.

Back to square one – no Facebook. At LEAST not for another year, til she’s 13, and maybe not then.

Nope. As you see, she chose a background, followed NASA and every English-speaking National Geographic brand there is (and her dad and I) and immediately learned how to retweet.

I am not kidding when I say I believe Ashar is gifted. She might not be gifted in a math-testing, essay-writing, science-fair-winning kind of way, but she is absolutely able to learn certain things at a rate that is MUCH higher than that of other people. And she doesn’t just learn “how” to do this stuff. She gets why.

She has an intrinsic understanding of how to find what she’s looking for on any platform, and how to know what platform will most likely have a particular type of material or welcome a post about the same. (In the past, I’ve met adults who can’t always grasp this – some of them are rather fire-hosey; you know, like let’s put the same thing in FIVE social networks at one time, because that makes sense.)

My absolute favorite part? Ashar’s first question: “Is there a limit to how many boards you can have?” I cracked up. It was just a very Ashar question, and there again, she was building her plans for her profile and who she was following around the capability of the technology.

She set to work repinning, oh, I don’t know, approximately every photo of the Titanic currently on Pinterest, as well as cats and butterflies. She added her second-favorite magazine (after National Geographic), Birds & Blooms, because she remembered reading in their editor’s letter last month that they pin a lot.

So the coolest thing to me about all this is that Ashar taught herself all these things.

The second-coolest, though, is that she is open to talking about the ups and downs of social media and the best practices for using it – including that she shares what she posts with Chris and I and connects with us (and other adults in our world) across these networks.

I won’t be surprised if she ends up with a Facebook account at some point in the next few years. But I feel like we’re setting a good foundation based on making social networks fun, open, informative, productive and uplifting – and that makes me worry a lot less.

And, of course, since I am so big on the “everything’s public” idea: If you’d like to join either Ashar’s or my networks, here’s where you can find us!

Hope you’ll check us out – and if you feel strongly about your children and social media, I would LOVE to know your thoughts! This is 100% just what works for us, not by any means a dictate against what other families choose!