I know I promised Part 2 of my mini-series on going full circle from homeschooled student to homeschooling mom. But it’s 11:55 p.m., I’m exhausted, and that post isn’t even STARTED, nor the photos scanned, nor… anything else. So, in the interest of actually getting some sleep, I told my husband I was making a last-minute substitution. His response? “You’re talking to a guy who’s delayed MANY of his Part 2s.” I love being married to a fellow blogger!

Today was our biweekly grocery trip – and by grocery trip, I mean “choreographed production involving a menu plan for the next two weeks, a large list, two stores, tons of coupons, three family members, a calculator, a system for bagging and a partridge in a pear tree.” This is our “works for us” routine, now, and I forget how weird it is until the checkout lady looks at me like, “How much of a mess do you people make with your 30-pack of paper towels, and why do you have 70 pounds of cat litter?”

This was actually a very light trip – between both stores, we were under $240 total, which is really good, budgetarily speaking. And Ashar was willing to come and help, which was also great. Generally our routine is that Chris pushes the cart and manages the list (and the crossing off of things on it); I handle tallying up our expenditures on the calculator using a rounded-to-the-nearest-quarter, military-like precision sytem, and I also juggle the not-yet-used coupons; and, if we’re joined by Mom or Ashar, that person holds the used coupons. If we have FOUR people, a miracle beyond expression, then I don’t have to hold (or subsequently drop) the unused coupons, either.

Ashar was a big help today, even doing some math in her head for us at one store to see what we spent and if it would be enough to use our “$10 off your $35 purchase” coupon. And, in another piece of great news, she was hungry. That’s a big deal; Ashar is actually so underweight that she’s in the first percentile – meaning, if you found 100 kids with her same birthday, she would be the thinnest for her height. Every time. So when she wants to eat something… we make it happen. Exactly the opposite of our own grocery-store strategy, which is never to go when we’re hungry! 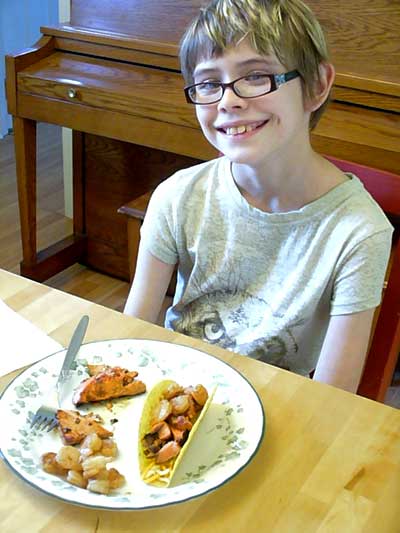 Her request on our menu plan for tonight was tacos, so we put ground beef on the list and were ready to roll with it. When we got to the store, however, she goes, “Oooh, can we look at the fish?” She picked out some wild-caught sockeye salmon, and she says, “I want this on my taco!” And then she looks at shrimp and says, “Do we have shrimp at home? Can I have shrimp on my taco?” In the cart goes the $6 filet of fish, and I make a mental note to revise the other recipe that called for our frozen shrimp!

We normally don’t have a side dish with our tacos, but Chris is incredibly smart, and he says, “What about some rice as a side dish?” So I find a simple box of organic rice pilaf, and into the cart that goes as well.

We get home, and we all work together to make dinner. For the finished product, Ashar layered into her stand-and-stuff taco shell (a BIG requirement for her, on taco night) the following, from the bottom up:

(Privately I thought: This sounds gross. Chris says he thought it sounded really good.) The end result was that Ashar ate the entire thing, and even had some extra shrimp and salmon on the side. 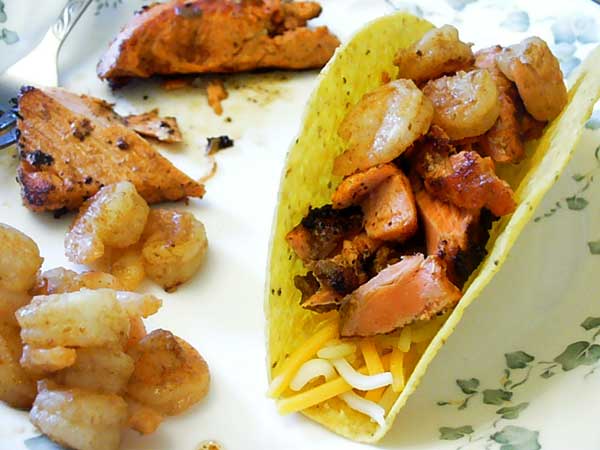 I’ll take that any day. Yay for tacos, for much more adventurous eating than Ashar used to do, and for the chance to spend even the “boring” parts of the day together as a family!