Amazing day today – and it really didn’t even kick off until 2 p.m., when I got home from an in-office shift for my part-time job!

When I got home, Ashar greeted me with a hot cup of tea she’d made me; the dishwasher was running – because she needed a small plate to use to microwave her lunch – and, while she’d dropped a plate earlier and it had broken, she’d cleaned it all up and calmly told me about it!

(At this point, I’m thinking perhaps I’m in the Twilight Zone… this is super-nice, but a little surprising!) 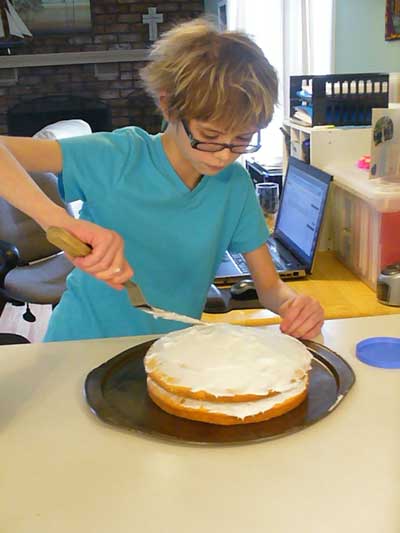 Next, Ashar decides – and I’m not even sure how this came up – that she wants to bake a cake. More on this to come tomorrow, but she did it almost entirely herself, icing and decorating and all. Wait’ll you see the finished product – it turned out super-cool.

THEN she tells me she’s going to put away the dishes, and so she does.

After that, I went to tae kwon do class, she hung out at home for a while, and while I was gone, Chris came home from work. And that’s where the fun really kicks in.

As someone – cough, me – might have possibly forgotten to put the pork in the slow cooker this morning, we didn’t have the planned menu for dinner. Instead, Ashar microwaved some packaged noodles and cheese for herself, and I had a light snack of string cheese and fruit before heading to my class. Well, when Chris comes home, not having a specific meal ready to go, he digs into his treat from the grocery store – fried chicken. Ashar even tried some, probably a first for her, and was kind of middle-of-the-road on it. But, when she saw Chris eating the meat off the chicken bones, well, that was interesting.

Well, bless Chris… he goes, “Hey, my dinner is turning into a biology lesson in here.” He had started to explain to Ashar, by breaking open one of the bones, that birds’ bones are often hollow inside so they can be light enough to allow for wing-flapping and flying. (You can read more about that here.)

Well, then Ashar goes, “Hey, I have a bone… I have the wishbone from the turkey, and we made it bendy. Can we make these bones bendy?” Well, into a jar with vinegar two of the bones go, and from there, things kind of took off.

First of all, Ashar wanted to know if the chicken bones would do the same thing her turkey wishbone did, so we Googled it. Up comes “Science Bob,” who apparently is a pretty well known “science performer,” having been on things like Jimmy Kimmel Live and what have you. He has a version of the “rubber bone” experiment.

Well, we start reading via Science Bob, and I really like his style – it’s not just, “Hey, kids, here’s a neat thing to do,” but he really explains WHY the bone starts to bend and gives you ideas on how to go from a demonstration to an experiment. (Do differently sized bones become bendy at different times? That’s one Ashar’s working on – her two from Chris’s dinner are wildly different in size. She made a good hypothesis and everything.)

Then, I start clicking around on Science Bob’s site and get a huge list of science experiments you can do right at home. Ashar decided that we HAD to try to clean pennies with vinegar. (Science Bob, by the way, DEFINITELY wins for “favorite resource this week.” I might have a mom-crush on him.) 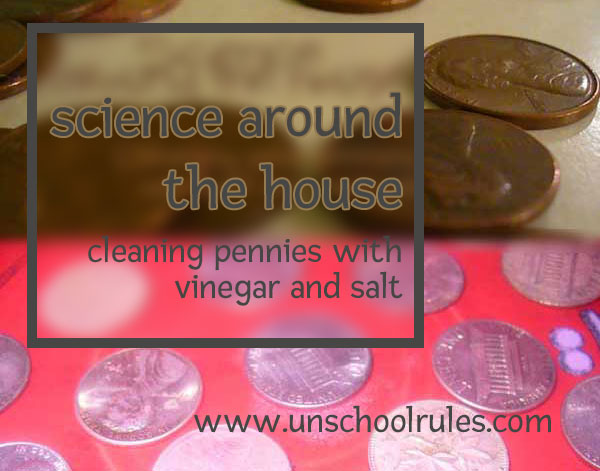 Check out that before-and-after! All you need is about a quarter-cup of vinegar, a small bowl (not glass), and a teaspoon of salt. Once you’ve mixed the salt and vinegar, add the pennies – and really watch them. You’ll see the copper oxide (the thing that makes them dark and grungy-looking) begin to disappear almost right away.

Well, Science Bob’s version of this keeps going, and so did ours. After several rounds of pennies, we did, as he suggests, try putting some household hardware – nuts and bolts – into the vinegar solution. Try it – you’ll be amazed. The metal attracts the copper that’s been leached out of the pennies, and the shiny silver will change to a coppery-black color!

At right is what our washers looked like when we started. We left the one on the right alone, but we put the one at left into the vinegar-salt mixture after we’d “cleaned” our pennies, and that’s what happened! Even more amazingly, after we’d left it there for some time, you could see what we believe was the salt forming almost a “halo” over the washer in the bowl. It was pretty phenomenal! Ashar also experimented by pouring salt directly onto some of the hardware, to see the effect that might have. 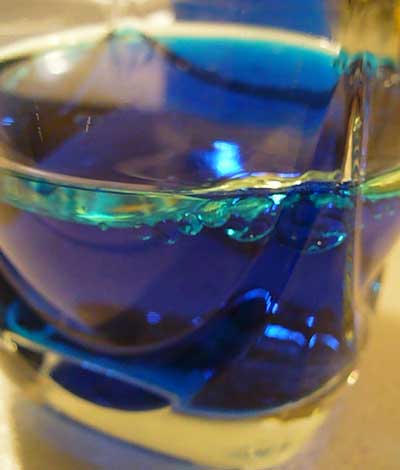 Finally – because by this time it was about 10:45 at night, and Mom was getting pretty beat! – we decided to make lava in a cup. This is a density experiment – first, you fill a cup about 2/3 full with water; then, you add about 5 drops of food coloring, if you’d like, just to jazz it up, and finally you pour in about a quarter-cup of vegetable oil. Ashar noticed right away how it separated and the oil rose to the top.

The fun part, though, is that you next dump in about a teaspoon of salt. That’s heavier than the oil, so it sinks through it into the water, carrying little bits of oil along with it; then, when the salt dissolves in the water, the oil pops back up, and you get a sort of a lava-lamp effect.

Our first attempt at this didn’t work as well; we used a HUGE plastic tumbler, and Ashar believes (and I agree) that there was too much water for it to really be a dramatic “bubbling” effect. Next, we tried a smaller glass, and this worked a good bit better; you can see some of our “bubbling” at right.

We also tried pouring in sugar to see if it would work the same way, but as the sugar was a bit lighter, it didn’t tend to sink down through the oil as well. We also talked about saturation – when the salt or sugar would not dissolve in the water any more, then no “bubbles” happened, and we’d have to start fresh.

Finally, we tried a very small juice glass, with no food coloring, and that bubbled pretty fast! (Not nearly as pretty, though.)

Ashar could have worked on these all night, but I had to rescue my salt container, which was nearing emptiness. (And we’re almost two weeks out from our next grocery trip!) After using all this kitchen stuff for our impromptu “science lab,” I reloaded the dishwasher, realized it was already full (again) and got out the detergent.

Ashar watches me and says, “Oh, I didn’t put any of that stuff in when I did the dishes earlier. Will that matter?”

9 thoughts on “Super science with stuff around the house”