During our first couple of weeks of homeschooling, we had one of the best cases of learning-by-happenstance I could imagine.


Disclosure: This post has some affiliate links. I only link to things we legitimately use and recommend, so if you see such a link, it's because we really do believe in the book or item!
We caught the 25th anniversary performance of The Phantom of the Opera at the Royal Albert Hall in London, thanks to our local PBS affiliate.

I’ve been a Phantom fan since middle or high school (and even was fortunate enough to see it on Broadway, thanks to our amazing high school band program’s trip), and once Ashar saw the performance this spring, she was hooked as well!

Even in the past two weeks, it’s still nothing for us to come downstairs in the morning and find Ashar engrossed in Phantom performance videos from Youtube on her phone, or asking to hear the CDs from the New York performance in the car.

It’s awesome! My friend Aadel was just talking the other day about how much you can learn from musicals, and it made me think that I should try to capture some of the great stuff we’ve found related to our personal favorite. 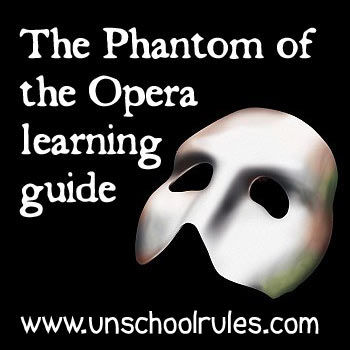 The Phantom of the Opera book and general story

If you’re not entirely familiar with the Phantom of the Opera plot, Wikipedia offers one of the best summaries out there of not only the Gaston Leroux novel, but also how it compares and contrasts with some of the modern renditions.

We have a battered copy of the novel, and while Ashar hasn’t made it the whole way through, I have read it in its entirety a few times, and Ashar’s cherry-picked some of the best parts!

Much like when we got on a Shakespeare kick after we saw the movie version of Romeo and Juliet, it worked best in our case for Ashar to see the live performance first and THEN try to pick up the book. I think it not only made more sense, but she was more invested in trying to make her way through it!

At Ashar’s level (she’s 12, and in seventh grade), the original novel seemed the way to go. But more toned-down retellings of the story make it accessible to younger readers as well. There’s a Stepping Stone early-readers’ edition as well as an upper-elementary version from the Classic Starts series, and even a Phantom pop-up book!

There are also any number of what I loosely lump into the category of “retellings,” “adaptations” and “sequels.” All I’ll say here is… there’s a reason I’m not linking to any! I’m sure there are some that are interesting, especially to real aficionados, but most I’ve found to be just weird for the sake of being weird!

(Even better description: Ashar asked Chris for a plot summary of the sequel, which he described to her, and she goes… “That’s messed up. It will end poorly.” There you go.)

Phantom of the Opera movies, CDs and live performances

Our dream is to take Ashar to see a live performance, hopefully on Broadway, within the next two years. (She’s campaigning for London, but, uh… that’s probably a bit unrealistic.)

It’s pricey, even for a touring show. I’m lucky enough to have seen the Broadway version in high school, as I mentioned, and one of the first trips Chris and I took together was to see a touring company perfomance in Baltimore; even that was a big gift!

If you can go, though, check out the official website, www.thephantomoftheopera.com, for details on shows in New York City, the United Kingdom, Las Vegas and more. Hint: Even if you don’t think you’ll actually get to a performance, the site is amazing!

We really enjoy our CD of the original cast recording. In fact, Chris and I both had copies when we got married, and we’ve worn them both down to the point of skipping, so we’ll probably have to fork over for a third soon!

If you’re just looking to introduce your family to Phantom, especially younger children, one of the best places to start is the vast collection of performance videos on YouTube.

I’m not a Netflix subscriber (yet; I think the day is coming!) but some friends have told me there’s a good selection of Phantom versions to watch there as well!

If you’re looking for a particularly good movie version, here are my three favorites, all very different and very worthwhile!

<Usborne English worksheet based on a young readers’ edition of the book (the version they reference is one from their catalog, but it’s appropriate for any of what I call the “standard retellings!”)

Any other Phantom fans out there? What did I miss? Leave a comment; I’d love to add to this even more!

This post is part of a loose series of posts good for unit studies. Here’s another one that shares our favorite solar-system learning resources!

We also do an occasional series of “Family Field Trip” posts, combining our own adventures with resources we’ve found helpful. Many of these will work even if you can’t visit in person!