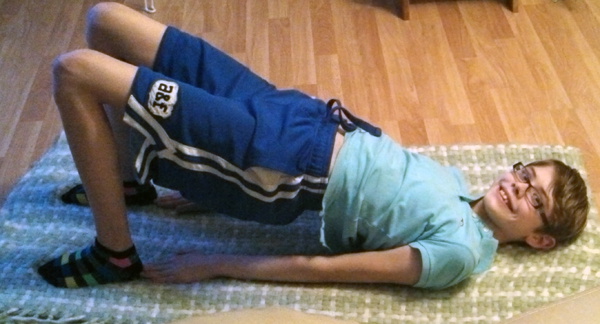 Ah, the perks of being a night owl… and of using video games as a big way to get our exercise!

Yes, I’m talking about last night, when I decided to get out the Wii Fit after a stunning hiatus from it. (In fact, it TELLS you how long it’s been since you last let the virtual scale tell you your not-so-great weight, and I was in the 400-some days range!)

I was going for a half-hour of activity, which I did by doing some step aerobics, some balance exercises and a few other things. One of the last games I chose was “Island Cycling,” in which, essentially, you move your feet up and down alternatingly and use the remote in your hands to “steer” your bicycle. This is not only harder than it sounds, it’s terribly silly-looking to anyone watching you, but it’s fun anyway.

Well, Island Cycling is one of Ashar’s favorite of the Wii Fit games. She hasn’t played it for probably several months, but all it took was me doing it for her to say, “Hey, when you’re done with that, maybe can I do it?” 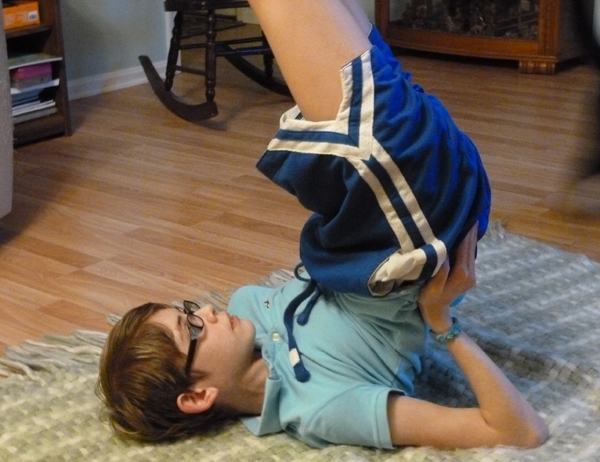 And she did. I’d only cycled for about 10 minutes as a mini-game, but she did it for a half-hour… and then decided she wanted to do 45 minutes total, so she tried meditation, ski-jumping, and yoga to make up the rest of the time.

She is GOOD at yoga – really good! (She’s very flexible and thin, and her balance is pretty great.) I’d love to see her do it with a real trainer, but I don’t think she’s at a point where she’d enjoy that, so for now, Wii yoga is awesome! 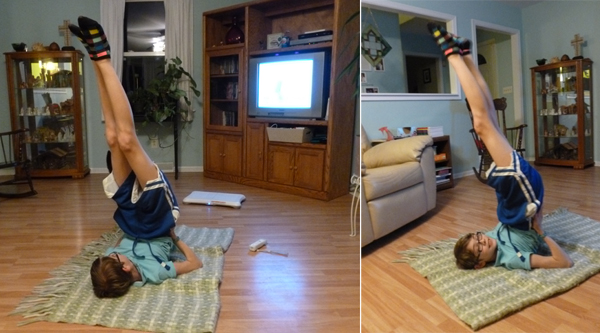 Yes, these pictures are of some of our stretching and yoga at midnight.

For those of you who are real practitioners, first let me say that we DO have a real yoga mat, though Ashar wasn’t interested in stopping to go get it. And while the pictures don’t show it, she can do the leg-raise straight up, but I was taking the pictures as she was moving, and my camera isn’t very precise!

Mostly, I just wanted to share this slice of our day with you. But I also want to point out that this is a great example of a concept that’s a huge part of our unschooling life, called strewing.

My friend Aadel has a great series called The Art of Strewing that I’d love for you to check out for more info. The thing I want to get across is that I didn’t ever say to Ashar, “Hey, we’ve all been a bit inactive lately, we should do some exercise.” Blech! If my husband said that to me, I’d hit him; I wouldn’t want to say it to anyone else.

Instead, I did something interesting, and Ashar got interested. I wouldn’t have been disappointed if she didn’t, but it sure was cool when she did!

3 thoughts on “Living-room yoga at midnight”